A New Class of Polar Explorers

In August, just as the short polar cruising season was winding down to a close, I sat down in a canteen at Moscow State University with Tatiana Posepelova, a business student and lover of extreme travel. She had just returned from a cruise with Poseidon Expeditions on the Russian nuclear icebreaker 50 Years of Victory (50 ??? ??????), where she traveled as a journalist for the cruise company aiming to popularize Arctic tourism. 50 Years of Victory is the largest nuclear icebreaker in the world, and one of the few capable of breaking through winter ice to reach the North Pole. Two years ago in October, the icebreaker carried the Olympic torch to the North Pole in a record four and a half days from Murmansk.

Over glasses of tea and deep-fried fish fillets, Tatiana described what it was like to travel on board the eight-year old ship. Construction initially started under the Soviet Union in 1989, but it did not pick up again until 2003 due to the lack of funds arising from the country’s rough transition to a market economy. The irony now is that the icebreaker, a symbol of Russia’s renewed technological and industrial strength, is now used occasionally for commercial polar cruises. Tickets start at $25,000, and some of the higher priced tickets fetch as much as $50,000. In one small way, the new class of global tourists with deep pockets, many of them from China, are bankrolling the Russian military-industrial complex – and Russian polar science, too. 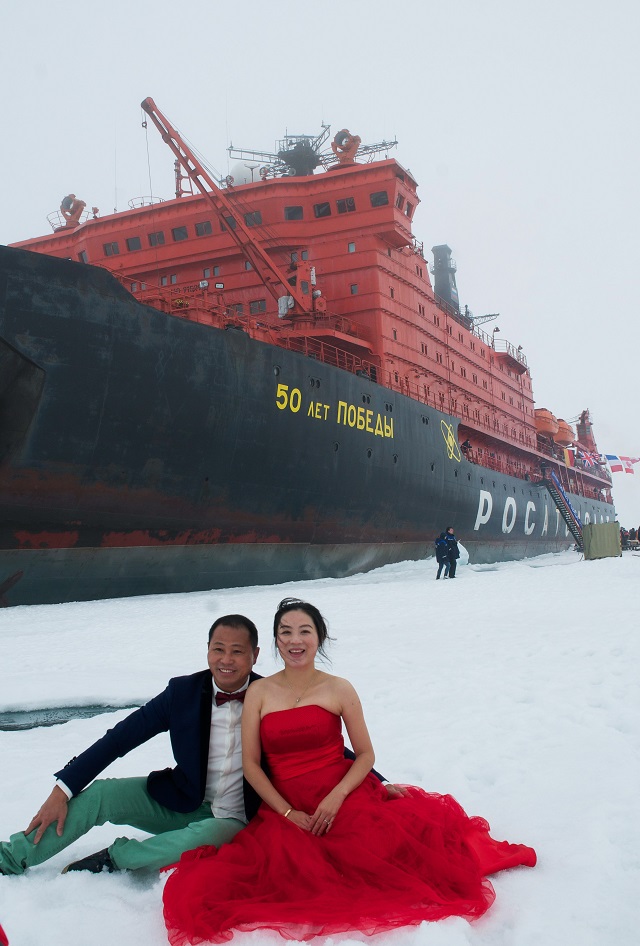 The icebreaker left from Murmansk and included 100 tourists, all of who stayed in double berths on a specially-built tourist accommodation deck. There were 50 Chinese tourists, 30 Austrians and 20 Russians, along with a team of 100 crewmembers. Tatiana remembered that the “scientists were not so happy to see the tourists” since the arrival of 100 extra people onto a 100-room ship forced them to share their rooms, which would otherwise be single accommodation in winter.

The ship had everything on board: a massage room, two banyas (Russian saunas) and even a swimming pool. There was a helicopter, too, which took tourists out to look at the ice from a different perspective. Tatiana agreed to share some of her photographs from the cruise with Cryopolitics, which are included throughout the post. 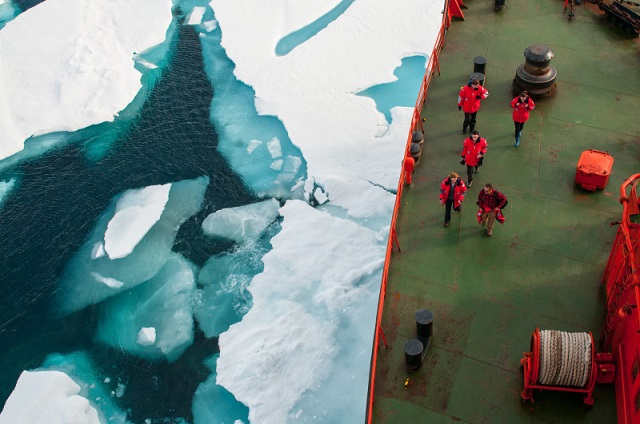 The view from a helicopter ride above 50 Let Pobedy. Photo: Tatiana Posepelova

The icebreaker set out from the port city of Murmansk, built during the Soviet era. The city lies on the edge of northwest Russia on the Barents Sea just under 69°N. Around 75°N to 77°N, the ice started appearing. Tatiana remembered that the sound of an icebreaker resembled the constant chugging of a train. As they traveled north, they saw a polar bear, face violently bloody from the carcass of a bird. Whale spouts sprayed up out of the water. A single sublime mountain emerged almost cartoonishly from water and ice. Walruses huddled together on ice floes while seagulls took shelters in the nooks and crannies of mossy cliffs. Here in living color – red, blue, white, black – was the Arctic wilderness of glossy cruise catalogs. 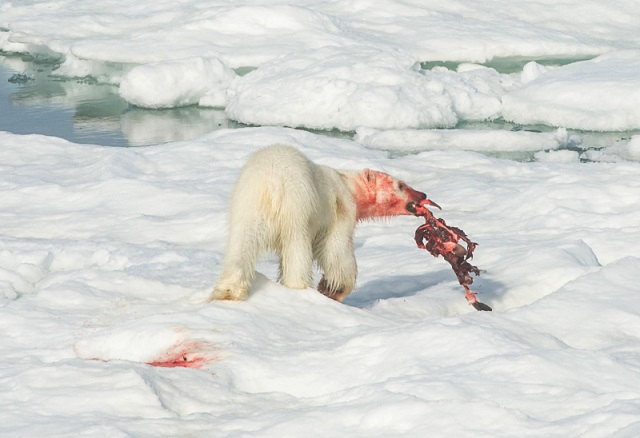 A polar bear bloodied from bird it preyed on. Photo: Tatiana Posepelova 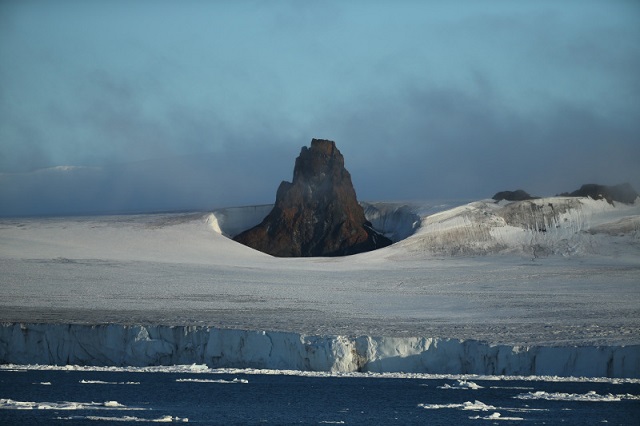 A mountain surges up out of the Arctic icepack. Photo: Tatiana Posepelova

I asked Tatiana what it was like to finally reach the top of the world after several days of cutting through thick multi-year ice – or at least as close as 50 Years of Victory would be getting this time around. The icebreaker had to stop about 15 miles away due to certain issues with the ice.

“Of course it’s exciting,” she remarked. “You understand you’re on top of the world. But what did you do to get there – just sit in a comfy ship?” Tatiana recounted how she had read about the ill-fated expeditions of people like Roald Amundsen, a Norwegian polar explorer, Georgy Sedov, a Russian polar explorer, and all the others who paid with their lives to try and get to the North Pole but still didn’t make it there. “It’s thanks to these guys who continued exploring that I can be here,” she reflected. She and 17,000 others. Tatiana noted that to date, that’s how many people – tourists, scientists, support personnel, coast guard members – have traveled to the North Pole.

With cruises to the North Pole only really having started in 1989, that’s about several hundred people per year. This is still not a high figure, but the regularity and near banality of traveling to the North Pole would probably shock 20th-century polar explorers, who prepared for years to go on death-dying voyages. Roald Amundsen, the Norwegian polar explorer who would beat Englishmen Robert Falcon Scott and his team to the South Pole, spent two winters living with the Inuit people at King William Island in present-day Nunavut, Canada, to learn how they survived the extreme environment.

No such intense preparation is necessary now. Tatiana even observed that for her, polar exploration “is like a kind of hobby.” She has already traveled to both the North and South Pole, allowing her the privilege of being able to compare the two, which was just over 100 years ago accorded to only one person in all of human history: Roald Amundsen. Tatiana recommends Antarctica over the Arctic because there are more animals. “The Arctic looks more dangerous and wilder, and it’s more difficult to reach. But if you look deeper, it’s not poor in nature.” For tourists with tens of thousands of dollars to spare, both poles are now in reach. 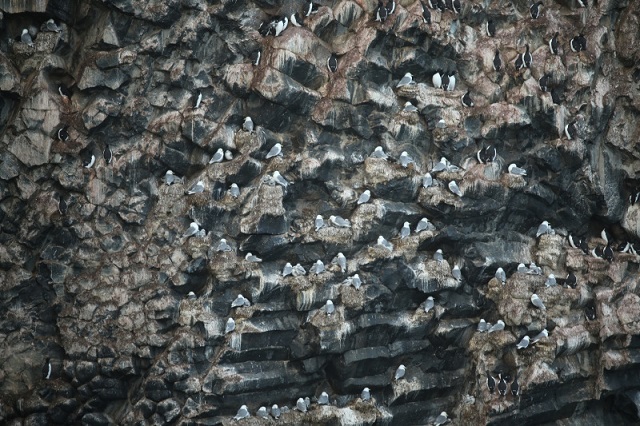 On the way back to Murmansk, the icebreaker stopped at a couple of islands in the archipelago of Franz Josef Land, including Hooker Island (?????? ??????). Sedov, the luckless Russian polar explorer, is buried on this remote spit of tundra. The Soviets operated a research outpost called Tikhaya Station from 1929-1959, but then closed it down for decades. Beginning in the 1990s, however, some renewed scientific activities began taking place. This August, 50 Years of Victory was taking food and supplies to one of those groups.

The ship also stopped at Champ Island. Eerily smooth and round stones dot the landscape here, and no one has ever been able to explain their origins. The Russian Wikipedia page for the island helpfully suggests that waves washing up on shore or aliens could be possible for these monoliths. The stones are like magnets for tourists: Tatiana explained that the Russian government is interested in building a tourist station here that could be similar to the United Kingdom’s Port Lockroy in Antarctica, where the U.K. Antarctic Heritage Trust runs a post office. Some 70,000 postcards are sent each year to 100 countries, according to their website. With tourist numbers in the Arctic on the rise, the Russian government – and the Russian Post Office – undoubtedly wants to reap some of the foreign tourist dollars on the icy horizon. 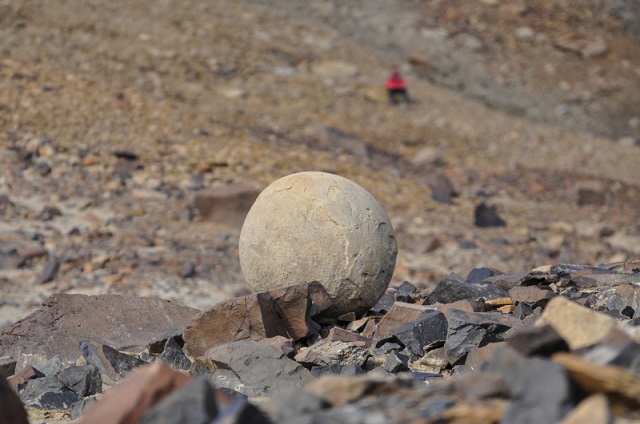 The inexplicably round, smooth stones that can be found on Hooker Island in Franz Josef Land. Photo: Tatiana Posepelova 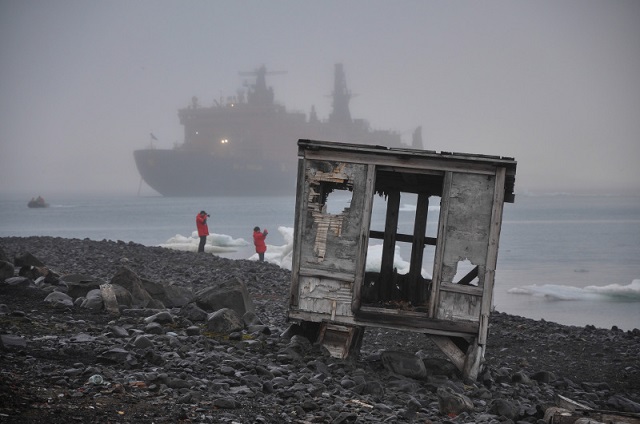 The fact that 70,000 postcards alone are sent from Port Lockroy while only 17,000 tourists have visited the North Pole suggests that Antarctic cruise ship tourism is in several ways more developed than in the Arctic. While the number of tourists standing with flags atop the North Pole every year probably won’t reach 70,000 for a long while, there will still be a lot more Chinese tourists, German pensioners, and European and American vacationers taking to the polar seas soon.

Only about ten companies currently operate cruises in polar waters, but more are lining up. Reporter Wendy Laursen at the The Maritime Executive reports that next August, Crystal Cruises’ Arctic Serenity ship will carry 1,050 high-paying passengers from Anchorage, Alaska through the Northwest Passage to Greenland and finally to New York on its Northwest Passage Expedition. Tickets start at $21,755, but a penthouse can be booked for $46,010, highlighting the enormous personal wealth of many of those in the new class of polar explorers, who are decked out in the latest high-tech polyester clothing rather than parkas made from caribou or seal skin. Then, starting in August 2017, Silversea Cruises will refurbish its 200-passenger luxury Silver Cloud cruise ship into an ice-class vessel.

All of this growth, Laursen points out, will necessitate comprehensive search and rescue capabilities along with a revamp of the International Aeronautical and Maritime Search and Rescue Manual to include more polar-specific guidelines. For its part, the Arctic Council signed a groundbreaking search and rescue treaty in 2013, but whether the eight Arctic states can cooperate and effectively pool their resources during a cruise ship disaster will, unfortunately, only really be proven when and if there is an incident. For the time being, the Arctic cruise industry is moving full speed ahead while search and rescue capabilities struggle to keep up. 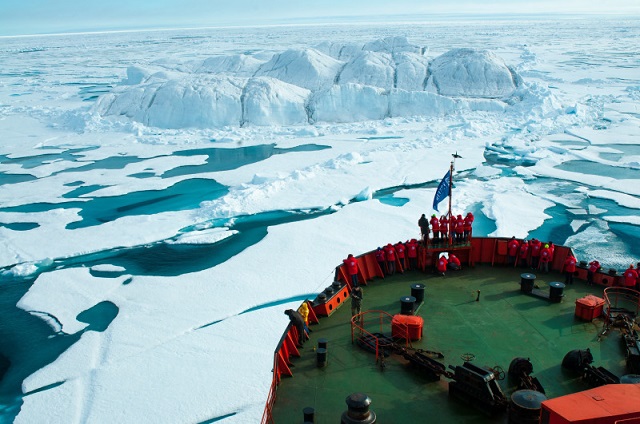 [Brief] Indonesian authorities reported the successful rescue from the ocean of sailors from a sunken vessel.   The vessel, the KM Ismail Jaya, reported that it had suffered a leak in its hull while sailing in the Southeast Sulawesi Province of Indonesia. At the time there were a total of seven crew members aboard the ship which was transporting logs inter-island. As the vessel began to sink the crew was forced to abandon ship. Five of the crew members, including...

The American Maritime Partnership, the association representing the Jones Act shipping industry, announced Monday that it is recognizing the actor Tom Hanks with its American Maritime Hero Award. In addition to his Oscar-nominated turns in movies like Forrest Gump, Saving Private Ryan, Cast Away and A Beautiful Day in the Neighborhood, Hanks has appeared in three films with direct connections to the U.S. Merchant Marine. In 2011, for the 10th anniversary of the September 11 attacks, he provided the narration...

U.S. Customs and Border Protection agriculture specialists reported two incidents of the discovery of highly invasive species of months on a container and ship arriving in the port of Baltimore, Maryland. Not known to be in the United States, the moths are considered potentially very destructive to trees and plants. According to CBP, its agriculture specialists discovered the egg mass on the exterior of a shipping container of aluminum billets from India. The USDA entomologist identified the egg mass as Lymantria...

On Friday, Greek shipowner Danaos Shipping joined the growing ranks of container ship companies that have announced that they are already compliant with the IMO 2030 carbon intensity goal.  Danaos, one of the leading independent owners and managers of container ships, said that its annual emissions per ton-mile have fallen by about 42 percent since 2008. The IMO's climate ambition plan calls for a carbon intensity reduction of at least 40 percent between 2008 and 2030, and Danaos - like...