In an elaborate handover ceremony conducted on June 11, Iran reported that it delivered its second domestically built oil tanker. The unnamed vessel which is only referred to in the reports as “Aframax 2” was built in defiance of international sanctions and delivered to Venezuela during a visit by the Venezuelan president Nicolás Maduro to Iran.

"The construction and delivery of the tanker, which has also been approved by the Venezuelan Technical and Engineering Group, in addition to helping the Venezuelan government achieve its goal of independence in maritime transport, shows once again that the will and the unity of warrior and revolutionary nations and governments is far stronger and more effective than American sanctions," said Iranian President Ebrahim Raeisi according to reports in the Iranian state media. 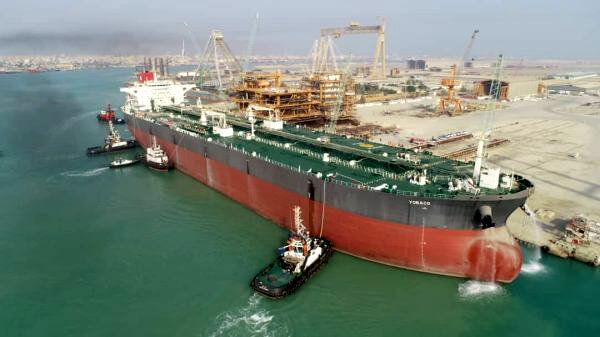 Today, the Mehr news agency posted a video of the vessel on its webpage. (Click here to view video.)

Details about the tanker are scarce but it was reportedly built by the Islamic Revolution Guards Corps (IRGC)-affiliated Sadra Company, which has long been under international and U.S. sanctions. The shipyard is in Bushehr on the coast of the Persian Gulf.

Iran had announced in 2019 its intention to resume domestic shipbuilding and in December 2020 they reported the launch of this tanker saying it would be completed in the spring of 2021. Last Wednesday, June 8 the vessel reportedly departed the shipyard for sea trials followed by the handover ceremony that was broadcast via a video link between the ship and the meeting of the Iranian and Venezuelan presidents.

Sadra reports that the vessel is 820 feet long with a beam of 145 feet. They are referring to the vessel as 113,000 dwt saying it has a carrying capacity of between 750,000 and 800,000 barrels of crude oil. They described the propulsion saying the ship has 21,000 horsepower and a top speed of 15 knots. They are reporting that three are three diesel generators each capable of producing 900 kW. The tanker operates with a crew of 36.

Iran valued the construction contract for two tankers at $240 million. Venezuela reportedly has two additional tankers on order from Iran but no timeline was specified for their construction.

Iran’s last known commercial shipbuilding project was a tanker built a decade ago which was named Sorocaima. At the time, they said that vessel was the first of several ordered by Venezuela, but after years of sitting idle the tanker was sold to Malaysian interests in 2018.

News of the delivery of the vessel came as Reuters reported that a tanker loaded with Iranian crude also arrived in Venezuela on Saturday. According to Refintiv Elkon’s data, the Sonia I, which departed Iran in early May, arrived at Venezuela’s Amuay refinery. The Reuters report says that it was the third Iranian tanker to transport Iranian crude to Venezuela this year. The prior two tankers reportedly delivered the crude and in exchange took cargoes of heavy oil and fuel back to Iran.