A military-funded team has released a study on the effects of climate change on American bases in the South Pacific, with dire predictions. The paper, published Wednesday in Science Advances, is named for its conclusion: "Most atolls will be uninhabitable by the mid-21st century because of sea-level rise exacerbating wave-driven flooding."

The authors - three scientists from the U.S. Geological Survey and one each from NOAA's National Ocean Service, the IAEA's Environment Laboratories, the University of Hawaii and the research institute Deltares - were funded by the DoD to study the impact of climate change and sea-level rise on Roi-Namur Island, part of Kwajalein Atoll. Roi-Namur has an elevation of six feet, and it is the home of an experimental radar station for the Ronald Reagan Ballistic Missile Test Site.

Using computer modeling, the team studied the effects on the installation from changes in wave height, storm frequency, rainfall and sea level due to climate change. They determined that sea level change posed the greatest threat to the island: When mean sea level rises more than 16 inches above its current point, "the annual amount of seawater flooded onto the island during storms will be of sufficient volume to make the groundwater non-potable year-round," they assert. 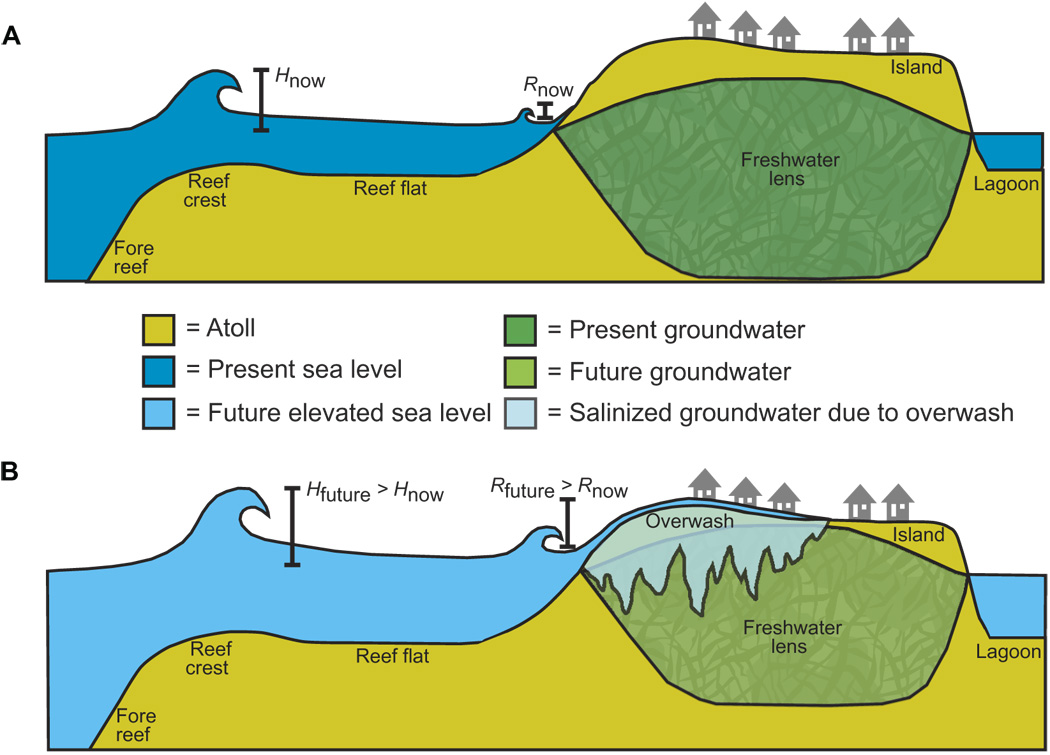 Mitigation measures - like withdrawing salty water and artificially recharging aquifers - could provide 3-4 months of potable groundwater during the rainy season, but whether this approach would be sustainable is not certain, they said. This challenge could arrive as early as the 2030s under a worst case scenario, they suggested, and the majority of the island's surface could experience annual seawater flooding by the late 2050s. In addition, about a dozen DoD facilities on Kwajalein Atoll's islands could face a similar fate, including the brand new Lockheed Martin "Space Fence," a $1 billion radar for tracking objects in low earth orbit. Active U.S. installations at Wake Island and Diego Garcia could also be vulnerable.

In a statement, DoD spokesperson Heather Babb told the Washington Post that the study provided a "better understanding of how atoll islands may be affected by a changing climate," and suggested that the knowledge would help the armed services make decisions to further their missions.

As an additional factor, coral bleaching events - the temperature-driven die-offs that have hit tropical reefs around the world in recent years - could reduce the coral cover just off these atolls' shores. With less coral, the shoals would be less "rough," and therefore less capable of reducing wave energy. "This will further enhance wave energy propagation to the shoreline and subsequent wave-driven flooding, causing tipping points to be reached sooner than projected," the authors wrote.