Aerial surveys of more than 500 coral reefs from Cairns, Australia, to Papua New Guinea reveal that the most pristine section of the Great Barrier Reef is currently experiencing the worst, mass bleaching event in its history, with the overwhelming majority of reefs being ranked in the most severe bleaching category.

Coral bleaching occurs when abnormal environmental conditions, like heightened sea temperatures, cause corals to expel tiny photosynthetic algae, called ‘zooxanthellae’. The loss of these colorful algae causes the corals to turn white, and ‘bleach’. Bleached corals can recover if the temperature drops and zooxanthellae are able to recolonize them, otherwise the coral may die.

“This has been the saddest research trip of my life,” says Professor Terry Hughes, convenor of the National Coral Bleaching Taskforce. “Almost without exception, every reef we flew across showed consistently high levels of bleaching, from the reef slope right up onto the top of the reef. We flew for 4,000 kilometers in the most pristine parts of the Great Barrier Reef and saw only four reefs that had no bleaching. The severity is much greater than in earlier bleaching events in 2002 or 1998.”

“Even more concerning, we haven’t yet found the southern limit of the bleaching,” explains Hughes. “We’ll be conducting further aerial surveys this week in the central Great Barrier Reef to identify where it stops. Thankfully, the southern Reef has dodged a bullet due to cloudy weather that cooled the water temperatures down.”

Multiple research vessels and island research stations are also documenting the coral bleaching, with in-water research confirming what is clearly seen from the air, that the majority of reefs north of Cairns are undergoing bleaching and that virtually all species of corals are being affected.

“We could see extensive bleaching even among the most robust, massive corals,” says James Kerry, Project Manager of the National Coral Bleaching Taskforce, who also participated in the aerial surveys. “The fact that these hardy species have also turned white shows just how severe summer conditions have become on the northern Great Barrier Reef.

“Residents we spoke to in Cape York were shocked by what they are seeing, telling us that they had never experienced anything like this before.”

“Scientists in the water are already reporting up to 50 percent mortality of bleached corals,” says Hughes, “but it’s still too early to tell just what the overall outcome will be. We will continue to conduct underwater surveys along the Great Barrier Reef in the coming months as the full impact of this mass bleaching event unfolds.” 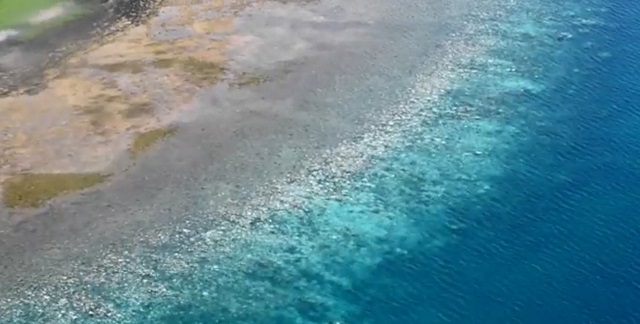 Senior Research Fellow, Dr Jodie Rummer from the ARC Centre of Excellence for Coral Reef Studies has just returned from more than a month at Lizard Island Research Station in the Northern Great Barrier Reef, and she is appalled by the extent of the bleaching.

“I witnessed a sight underwater that no marine biologist, and no person with a love and appreciation for the natural world for that matter, wants to see,” she said.

Rummer has been undertaking research on the island since January 2012, one of the most pristine sites in the entire Great Barrier Reef. She has spent the past five weeks underwater, studying the effects of the extreme heat on the physiology of reef fishes.

“The bleaching now is not just restricted to the hard corals. There’s also extensive bleaching in the soft corals, and it is also affecting anemones and giant clams.”

Rummer called the event catastrophic. She said fish were still abundant but is worried for the future.

“We know that many of these tropical populations of reef fishes cannot tolerate dramatic increases in temperatures for extended periods of time. So it may be just a matter of time before the fish start feeling the heat as well. We’re watching them closely.”

The latest Bureau of Meteorology forecasts suggest that temperatures will remain well above average through the month of March. Rummer said the heat comes hard on the heels of cyclones that had also had an impact on the northern Reef.

“This year, the combination of El Niño, climate change and an extended period of hot summer days when the tide was exceptionally low has caused many of the corals that survived last year’s cyclone to lose their symbiotic algae and start bleaching.”

The researchers, who are monitoring and forecasting the loss of corals from disease and heat stress due to record ocean temperatures, report that the global coral bleaching event that started in 2014 could extend well into 2017.

Approximately 500 million people worldwide depend upon reefs for food and to protect coastlines from storms and erosion. Coral reefs provide habitat, spawning and nursery grounds for economically important fish species; provide fishing, recreation and tourism jobs  and income to local economies; are a source of new medicines and are hotspots of marine biodiversity.

Reefs contribute approximately $29.8 billion to world economies each year. In the United States, NOAA Fisheries estimates the commercial value of U.S. fisheries from coral reefs is more than $100 million.

“We are currently experiencing the longest global coral bleaching event ever observed,” said Mark Eakin, NOAA’s Coral Reef Watch coordinator. “We may be looking at a 2- to 2½-year-long event. Some areas have already seen bleaching two years in a row.”

According to Eakin, the length of the event means corals in some parts of the world have no time to recover before they are hit by more bleaching. The current global bleaching event is hammering some reefs repeatedly.

The NOAA coral scientists point out that reefs that bleached in 2015 in the Caribbean and Florida Keys have just started to recover, but may start bleaching all over again as early as July. Eakin also notes that in the Pacific, corals in Fiji’s nearshore waters are bleaching with lots of dead coral for the second consecutive year, and could be worse than last year.

Also, as bleaching events become more frequent, some reefs may not have time to recover. In 1998 in Southeast Asia, severe bleaching was followed by twelve years of recovery that allowed some of the more rapid growing, branching corals to grow back. However, the slower growing corals that build the backbone of reefs did not recover. In 2010, the same area was hit again, killing off newly grown branching corals and many of the surviving massive corals. These reefs may see bleaching again later this year.

“The 2010 Southeast Asia event was only six years ago,” said Eakin. “We're seeing global bleaching again now. Research shows that the frequency of mass bleaching events is increasing because of global warming. The corals are being hit again and again.”