Russia was the largest supplier of crude oil to China in 2016, surpassing Saudi Arabia for the first time on an annual basis. The record was set in reverse with China now being Russia's largest destination for crude oil exports, receiving 953,000 b/d, or about 18 percent, of Russia’s total crude oil exports. 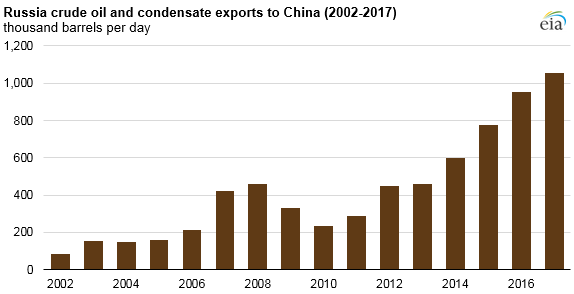 In 2016, more than 80 percent of Russia’s crude oil and condensate exports were seaborne. However, regardless of the ultimate mode of transport, most of Russia’s crude oil exports must traverse Transneft’s pipeline system, either as a direct route to reach bordering countries or to reach Russian ports. Russia’s state-owned Transneft holds a near-monopoly over Russia’s pipeline network, although some smaller volumes of exports are shipped by rail and on vessels that load at independently owned terminals.

Similarly, Russian imports provided more than one-third of the total crude oil imported to European members of the Organization for Economic Cooperation and Development.

Russia also exports sizeable volumes of petroleum products. According to Eastern Bloc Energy, Russia exported about 1.3 million b/d of fuel oil, 990,000 b/d of diesel, and 120,000 b/d of gasoline in 2016. It exported smaller volumes of liquefied petroleum gas (75,000 b/d) during the same year, according to Clipper Data. Product exports have grown significantly over the past several years and are expected to continue to grow as Russian refineries add capacity to produce more high-quality products.