After Sea Rescue, USNS Trenton Must Wait to Offload Survivors

The U.S. Navy fast transport USNS Trenton is awaiting orders off the port of Augusta, Sicily, with 40 sea rescue survivors on board. Italy's newly-elected government opposes the arrival of maritime migrants, and this week it began to reject port entry requests from rescue vessels.

The crew of the Trenton rescued 40 maritime migrants from an inflatable raft about 20 nm off Libya on June 12. According to maritime rescue NGO Sea-Watch, the Trenton had requested permission to transfer the survivors to the privately-operated rescue vessel Sea-Watch 3. Permission was granted, but the transfer did not occur, and the following day the Trenton got under way for Augusta without further communication.

In an update Friday, Sea-Watch reported that the Trenton remains waiting off Augusta for authorization to enter port. The U.S. Navy's 6th Fleet said in a statement that "U.S. authorities are coordinating with . . . international partners to determine [the survivors'] ultimate disposition." 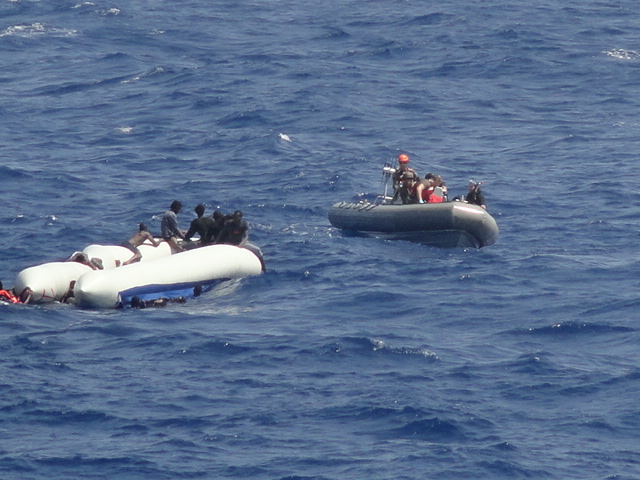 Early reports in Italian media suggested that the remains of 12 victims had been brought aboard the Trenton and/or subsequently buried at sea. In a statement, the Navy said that the Trenton's crew had initially identified 12 unresponsive individuals in the water but had prioritized rescuing the living. “The [Trenton's] RHIBs and fast rescue boat conducted a follow-on search for these bodies, but did not find any additional persons at the scene. If necessary, US Navy ships are able to preserve remains in refrigerated storage,” the service said.

The original number of migrants embarked on the raft and the full number of casualties are not yet known.

On Sunday, Italy refused the NGO-operated rescue vessel Aquarius permission to enter a Sicilian port to offload 629 rescued migrants. Matteo Salvini, the minister of the interior and the leader of the right-wing League party, said in a statement that "rescuing lives is a duty, transforming Italy into an enormous refugee camp is not." The Aquarius is now transiting to a port in Spain, where she has received permission to transfer survivors to shore.

After barring the Aquarius from port, Salvini suggested that the Sea-Watch 3 would also be denied permission to enter Italy and discharge survivors upon its return from the rescue zone off Libya. His statement raised questions about the disposition of any migrants transferred to the charity-opeated Sea-Watch 3 from the USNS Trenton. As Italy has recently allowed government vessels to disembark migrants without incident, Sea-Watch expressed hope that the Trenton would be permitted to bring the survivors to shore herself if Sea-Watch 3 is blacklisted.

Over the past year, Italian public opinion has shifted against immigration. Migrant flows into Italy continue, albeit at a slower rate, and migrant departures from Italy to other European nations proceed at a relatively slow pace due to EU asylum policies. In two polls conducted in September, 46 percent of Italians said that they felt that migration made Italy less secure, and just over half said that their government had not done enough to curb immigration. During the Italian general election this March, the League party and its allies campaigned on a nationalist, anti-immigration platform and won a plurality of seats in Italy's legislature.

The International Chamber of Shipping and the International Transport Workers' Federation warned that Salvini's opposition to NGO rescue vessels will have implications for commercial maritime traffic. "Following the election of the new Italian Government, the crisis now seems to be taking an ever more political direction,” ICS said in a statement. “If NGO vessels are prevented from disembarking rescued persons in Italy, this would also have significant implications for merchant ships and the movement of trade throughout the Mediterranean, as merchant ships would again have to become involved in a greater number of rescues."