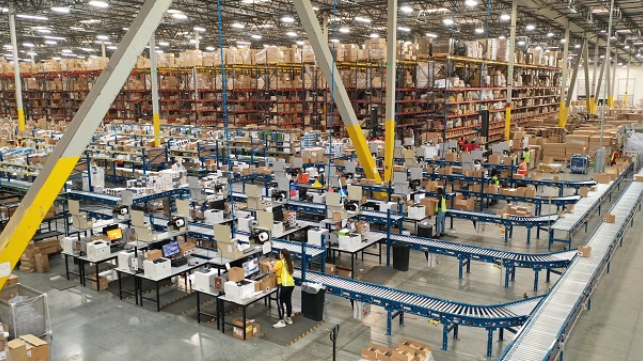 The Transition from Pallets to Containers is Boosting Traffic at America?s Reefer Ports.

Market specialist Lauren McCormick at the port of Freeport, Texas says, “The reefer trade, overall, has gone through a great deal of change” in the last few years. Similar thoughts from industry analysts have been widespread in numerous publications. Change or evolution, however you look at it, can signal progress. In fact, in today’s reefer trade it’s still cool to be cool.

But change or evolution brings challenges, and various segments of the industry are facing issues.

Her astute observations are supported by Drewry, the U.K.-based global shipping consultant.

As for other changes, like new players entering the market, it was widely reported this past summer that reefer specialist Seatrade Group of Antwerp had teamed with French shipping line CMA CGM to offer a new weekly service between Europe and Oceania. The service, scheduled to start in October, was to deploy 13 vessels in the rotation.

“Even with all this short-term change, you would think we would have seen more partnering and perhaps some winners or losers,” adds McCormick. However, in Freeport’s case, where bananas are the major perishable product, Dole and Chiquita “continue to compete and serve their customers very well.”

Bananas are also a big deal at the Port of San Diego where they are the major perishable item imported by Dole. “The Dole vessel arrives once a week,” says Marguerite Elicone, the port’s Marketing and Public Relations Representative, “bringing about 750 containers of bananas and other perishables. We estimate that we receive 185 million bananas a month at our Tenth Avenue Marine Terminal.” The port is preparing for a $24 million modernization project at the Tenth Avenue Terminal, which caters to specialty cargo like Dole’s refrigerated containers.

Although bananas and other perishables like fruits, vegetables, beef, poultry and seafood have been common reefer items, Drewry now includes such commodities as pharmaceuticals, cut flowers and chemicals in its tonnage estimates.

As carriers add new products that require a temperature-controlled environment for days at a time, new technologies are constantly being considered and tested to ensure the products arrive at their destinations in tip-top condition. Singapore-based Daikin Reefer, for example, a global supplier of container refrigeration equipment, has focused on active controlled atmosphere (CA) technologies.

“Daikin’s new Active CA technology is the only active, rather than passive, technology on the market,” says Ah Huat Goh, General Manager of Global Marketing & Service. “It’s based on vacuum pressure swing adsorption (VPSA), an active atmosphere separation technology that can create the optimal controlled atmosphere very quickly. VPSA uses the mineral adsorbent zeolite to capture a large quantity of nitrogen from the air and transfer it into the reefer container, allowing oxygen levels to be quickly reduced without the need for additional nitrogen gas injection.”

Goh says the Daiken process will be a game-changer because it injects outside humidity into the reefer container: “This is extremely important for fruits with a high water-content because when you have high humidity you have higher weight and better quality because it’s 95 percent water and the freshness relies on humidity.” As a result, shipping lines will be better able to challenge airlines for various cargoes.

As technologies advance, ports and their partners continue to invest in the required infrastructure. At the Port of Oakland, one of the U.S.’s busiest ports for agricultural exports, construction has started on a 280,000-square-foot refrigerated distribution center at the Oakland Seaport. The port is known for its Bay Area cold chain capabilities including chilled and frozen storage and transload services through Agro Merchants, Dreisbach, Pacific Transload, Preferred Freezer and Unicold Logistics.

“Cool Port Oakland will add even more capacity for handling American chilled and frozen meat and poultry for export to Asia,” notes Beth Frisher, Manager of Business Development & International Marketing. “International logistics specialist Lineage Logistics and local operator Dreisbach Enterprises are building the temperature-controlled and rail-served facility under a lease agreement with the port.” Developers estimate the new facility could bring in over 27,000 additional TEUs annually.

Port Tampa Bay had its refrigeration infrastructure enhanced with the opening of Port Logistics Refrigerated Services’ (PLRS) new 134,000-square-foot cold storage facility. “We are proud to be partnering with our tenant PLRS on this project and excited about the opportunity to expand into the reefer sector,” says Wade Elliott, the port’s Vice President of Marketing & Business Development. “The new addition complements our recently expanded container terminal and new post-Panamax cranes.”

The new facility boasts over 9,000 pallet positions to accommodate both chilled and frozen products, food-grade glycol refrigerant throughout the warehouse, 96 refrigerated container plugs and onsite U.S. Department of Agriculture and U.S. Customs and Border Protection inspection and fumigation services. It sits on a 13.7-acre site and is designed to handle both palletized breakbulk cargo and refrigerated containers.

If any Florida port knows the value of reefer cargo it’s Port Everglades, the state leader in perishable throughput, moving nearly half of all ocean-shipped refrigerated containers in Florida. In 2017 volumes continued to grow with double-digit increases anticipated due to a new vessel-sharing agreement for the Costa Rican market between long-time port customers Ocean Services Limited and Crowley Caribbean Services, says Ellen Kennedy, the port’s Assistant Director of Business Development/Communications. The agreement expands the carriers’ reach into the port’s top trade market, Central America.

Port Everglades is also participating in a new ocean-to-air transshipment program designed to save shippers time and money. Port Everglades is the port of entry for perishable cargo transported by Crowley Maritime’s Miami-based subsidiary, Customized Brokers. The cargo is then flown to Europe from Miami International Airport. The program, a first for Florida, allows Central American produce to reach European markets faster.

Georgia Ports Authority (GPA) sees perishables as key cargo and a growing market, says Pat Richardson, Manager of Commercial Communications. Savannah already has an established outbound refrigerated market and is looking at the import market as an expansion opportunity. Richardson says GPA is working with the U.S. Department of Agriculture and U.S. Customs and Border Protection to expand the number of commodities and countries that can use Savannah as a port of entry. Since 2013, USDA has approved the importation of cold-treated citrus fruits, grapes, blueberries, apples and pears from Peru, Chile, Uruguay and Argentina via Savannah.

In Norfolk, the Port of Virginia has become the latest East Coast port to become part of the U.S. Department of Agriculture’s Southeast In-Transit Cold Treatment Pilot Program. The program allows entry of in-transit, cold-treated products originating in South America including blueberries, citrus and grapes from Peru, blueberries and grapes from Uruguay, and apples, blueberries and pears from Argentina.

Under the terms of the program, a limited number of containerized cargoes are permitted to enter the port directly after completing a two-week cold treatment process as a safeguard against fruit flies and other pests and securing all the required unloading clearances prior to the shipment’s arrival in port.

Although the Port of Galveston doesn’t have multiple tenants involved in refrigerated cargo, Del Monte Fresh Produce, N.A. has made Galveston its second busiest terminal of the four it operates in the U.S. dedicated to reefer cargo. Del Monte supplies one ship a week to its distribution terminal in Galveston from Santo Tomas de Castilla, Guatemala. The ship carries both reefer containers and temperature-controlled cargo on pallets. In 2016, the port handled 17,712 reefer containers and 230,221 short tons of breakbulk refrigerated cargo.

Captain John Peterlin, Senior Director of Marketing and Administration, says the port is undertaking a strategic planning process and discussion will include where potential opportunities are. “I think reefer cargo will be on that list,” he concludes.  MarEx

A.P. Moller - Maersk has reached an agreement to acquire Performance Team for $545 million. Performance Team is a U.S.-based warehousing and distribution company, and Maersk says the acquisition will further strengthen its capabilities as an integrated container logistics company, offering end-to-end supply chain solutions.  Performance Team has a track record of profitable growth of 17 percent per year for the last four years, and revenue for 2019 of $525 million. It is a family run business that began operations...