Ports in the U.S. and beyond are scrambling to capture a piece of the expanded Panama Canal trade. Who will the winners be? 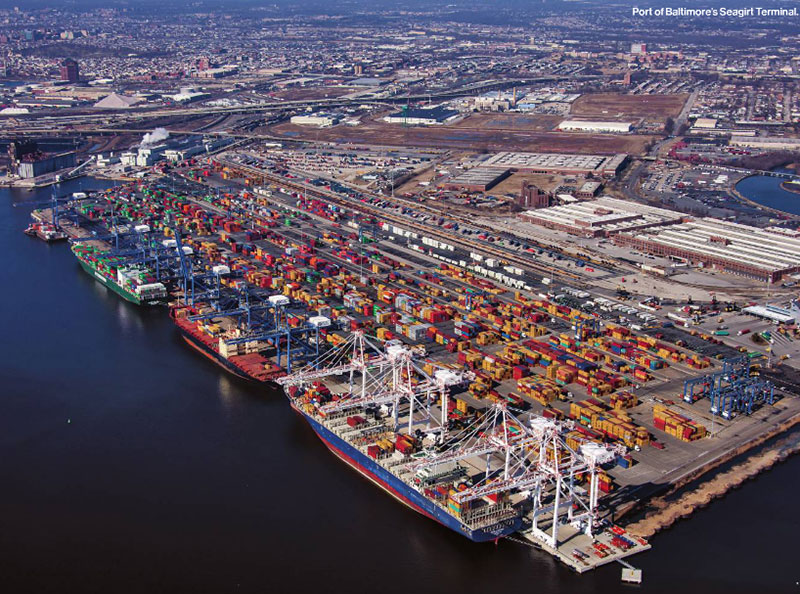 In Savannah, Georgia a heavy lift ship carries a series of bigger, taller cranes to bolster the lifting and cargo capacity of the port. Savannah, like several other container ports on the East Coast, is investing in such infrastructure projects to handle the anticipated surge in shipments coming its way after the 100-year-old Panama Canal completes a more than $5 billion expansion to accommodate larger, so-called “post-Panamax” ships with twice the cargo-carrying capacity. For port cities like Savannah, such expansions will enable an economic boom that will benefit the entire region.

The Panama Canal expansion has precipitated a flurry of infrastructure projects from Houston to Newark, New Jersey. The upgrades are significant and represent major capital investments. They will enable large vessels with expanded TEU capacities to offload in their ports, making them the linchpin for the supply chain strategies of major importers and exporters.

The investments sometimes mean big changes. For example, the Port of New York & New Jersey plans to raise the height of the Bayonne Bridge to enable larger capacity vessels to pass under and dock. The Port of Baltimore is investing over $100 million in new cranes. The State of Florida is spending over $700 million on enhancements to the ports of Miami, Port Everglades and Jacksonville. Ports in places like Jamaica and Australia are all ramping up for the next big era in container shipping when the expanded Panama Canal opens for business in 2015.

The Port of Miami is building a new truck tunnel under the harbor and adding rail connections to speed cargo to points throughout the U.S. According to Bill Johnson, Miami’s Port Director, it plans to take final delivery of four large Panamax-sized cranes as part of the expansion. Johnson says Miami is the first port the new post-Panamax vessels will reach when they turn toward the eastern seaboard after transiting the Canal.

"Our on-dock, on-rail expansion is expected to result in a 25 percent reduction in shipping costs by having rail lines dockside of the vessels," he explained. "From there, they can reach 70 percent of the U.S. in four days or less." The port is spending some $2 billion from federal, state, port and corporate sources. "We've been unloading 4,000 TEUs of cargo daily and will now be unloading 12,000-15,000 TEUs," he added.

"Long-term investments in a nation’s transportation infrastructure are a critical component of its economic vitality and essential to compete internationally," said Marlene DaCosta, head of Strategic Marketing for Ports America in New Jersey.    "Gains in efficiency and productivity through enhanced labor management, new state-of-the-art equipment and automation are paramount. Larger ships naturally will increase the intensity of activity and congestion at ports as ships will need to be turned quickly.  While ports generate most of the industry infrastructure discussions, inland connectivity will be crucial as well. Rail connections and the development of distribution centers could become bottlenecks in the overall chain, driving shifts in trade patterns even if ports are ready."

All of this will affect relocation and drive decisions for companies who rely on a swift supply chain to use a particular port. "If the U.S. wants to be competitive, ports will need to expand," stated Andre Chabanel of PwC’s U.S. Transportation & Logistics unit in New York. "They will need to be dredged or reconfigured to handle the ever-larger container ships, and the infrastructure within the ports will need to improve. The speed and ease with which cargo can exit the ship and get onto rails or trucks will be key. The ports that get this right and can do it most cost-effectively will succeed. Those that don’t will likely see a shrinking share of the business."

Adds Maria Pilco, Marketing Analyst with the Port of Houston: "Transpacific trade through the Panama Canal will increase as expected provided that the canal fees remain competitive and economies of scale of larger ships are transferred to shippers by carriers. Other factors that will determine the volume of growth are outsourcing manufacturing, Panama Canal and Suez Canal competition, consolidation of transshipment hubs in the Caribbean, and the global economy that influences demand for containerized cargo."

Pilco says the expansion may have some consequences in terms of competitive market dynamics: "The Suez Canal’s competitive fees and the expansion of Indian ports may spur container growth moving through the Suez instead of going to the U.S. West Coast.” In addition, China’s rising labor costs may help countries such as Vietnam gain a foothold in low-end manufacturing.

However, countries with low production costs, other than China, lack infrastructure development in transportation to secure an efficient and flawless supply chain. China will most likely remain as the giant in low-end manufacturing. Other emerging markets with competitive production rates and a growing middle class, such as Mexico and South America, may gain market share as well. For example, Colombia’s Port of Cartagena will invest $400 million over three years to double its container capacity.

The Port Authority of Jamaica is betting heavily on the Panama Canal expansion to boost its port volumes. It’s moving rapidly to upgrade infrastructure and equipment to capitalize on its strategic position in the central Caribbean. The Kingston Container Terminal basin and ship channel are being dredged and deepened to accommodate post-Panamax vessels and serve as a transshipment hub for draught-restricted ports on the U.S. East and Gulf Coasts. Kingston is also increasing its container-stacking area to accommodate the additional TEUs it anticipates.

The competition among U.S. ports is fierce. East and Gulf Coast ports are all investing in infrastructure and equipment to accommodate the bigger ships. "On the Gulf Coast," says Houston’s Pilco, "the Port of Houston Authority will invest $112 million in dredging and widening the channels at the Bayport and Barbours Cut Container Terminals. The channels will be dredged to 45 feet to match the Houston Ship Channel that is currently 45 feet. The projects are scheduled to be completed by the end of 2014." 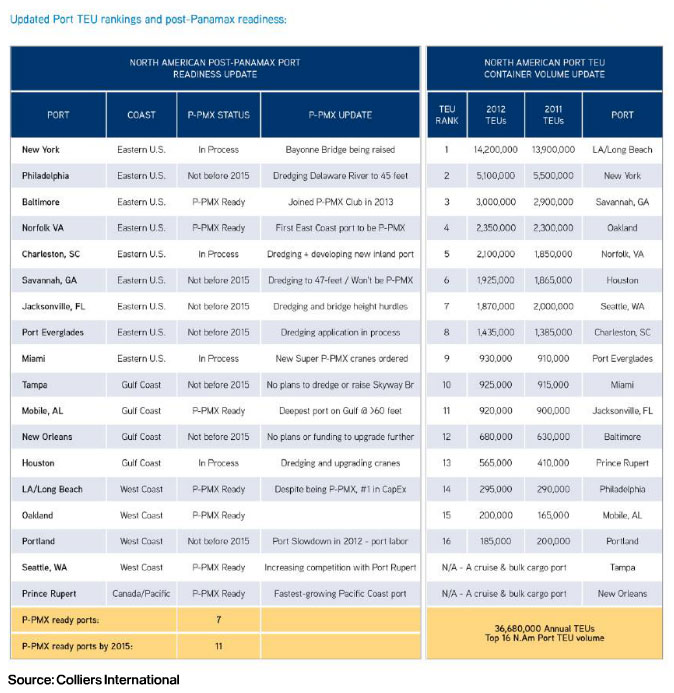 As far as equipment is concerned, a planned $700 million project to modernize the Barbours Cut facility includes new cranes, lights and dock improvements to provide customers more efficient cargo-handling and expanded capability to service larger ships. There are five wharf post-Panamax cranes at Barbours Cut, and there will be four additional electric wharf cranes delivered this year.

Bayport Terminal is equipped with nine post-Panamax wharf cranes and will have 21 post-Panamax cranes at build-out. Bayport’s master plan includes a $1 billion investment in upgraded facilities.

"Ports are major economic generators for the cities and states they reside in,” says Richard Scher, Director of Communications for the Port of Baltimore. "Thanks to a public-private partnership with Ports America Chesapeake, we now have a 50-foot deep container berth and four Super Post Panamax cranes. Baltimore is now one of only two East Coast ports able to accommodate some of the biggest ships in the world."

The economies of scale of the larger ships are great, but they need adequate infrastructure to receive them. “The size and scale of today’s ships is tremendous," says PwC's Chabanel. "There are cost-efficiencies in running bigger ships, but the drawback is there will need to be greater reliance on other modes of transportation and related infrastructure as well. Smaller ships are more nimble in choosing different ports and reducing their dependence on infrastructure. But the bigger ships will be handling goods for even more end-destinations and will therefore need the infrastructure in place to feed into other modes for ultimate delivery. Competitively, I think you will see the larger ships taking an increasing share of the market.”

To invest heavily in port infrastructure represents a gamble for some, but the payoff may well be a game changer in terms of competing globally. And many just can’t afford to be out of the game. “This is ‘make-it-or-break-it’ time for North America’s port cities,” said K.C. Conway, Chief Economist for Colliers International in the U.S. and author of an acclaimed series of North American Port analyses. “Changing trade patterns and evolving e-commerce trends will present great economic opportunities for the cities that invest in their transportation infrastructure. And for those cities that don’t invest, they put their economies at serious risk.” – MarEx