What Was the Climate's Role in a Two-Week String of Cyclones?

When Hurricane Ian hit Florida, it was one of the United States’ most powerful hurricanes on record, and it followed a two-week string of massive, devastating storms around the world.

A few days earlier in the Philippines, Typhoon Noru gave new meaning to rapid intensification when it blew up from a tropical storm with 50 mph winds to a Category 5 monster with 155 mph winds the next day. Hurricane Fiona flooded Puerto Rico, then became Canada’s most intense storm on record. Typhoon Merbok gained strength over a warm Pacific Ocean and tore up over 1,000 miles of the Alaska coast.

Major storms hit from the Philippines in the Western Pacific to the Canary Islands in the eastern Atlantic, to Japan and Florida in the middle latitudes and western Alaska and the Canadian Maritimes in the high latitudes.

A lot of people are asking about the role rising global temperatures play in storms like these. It’s not always a simple answer. 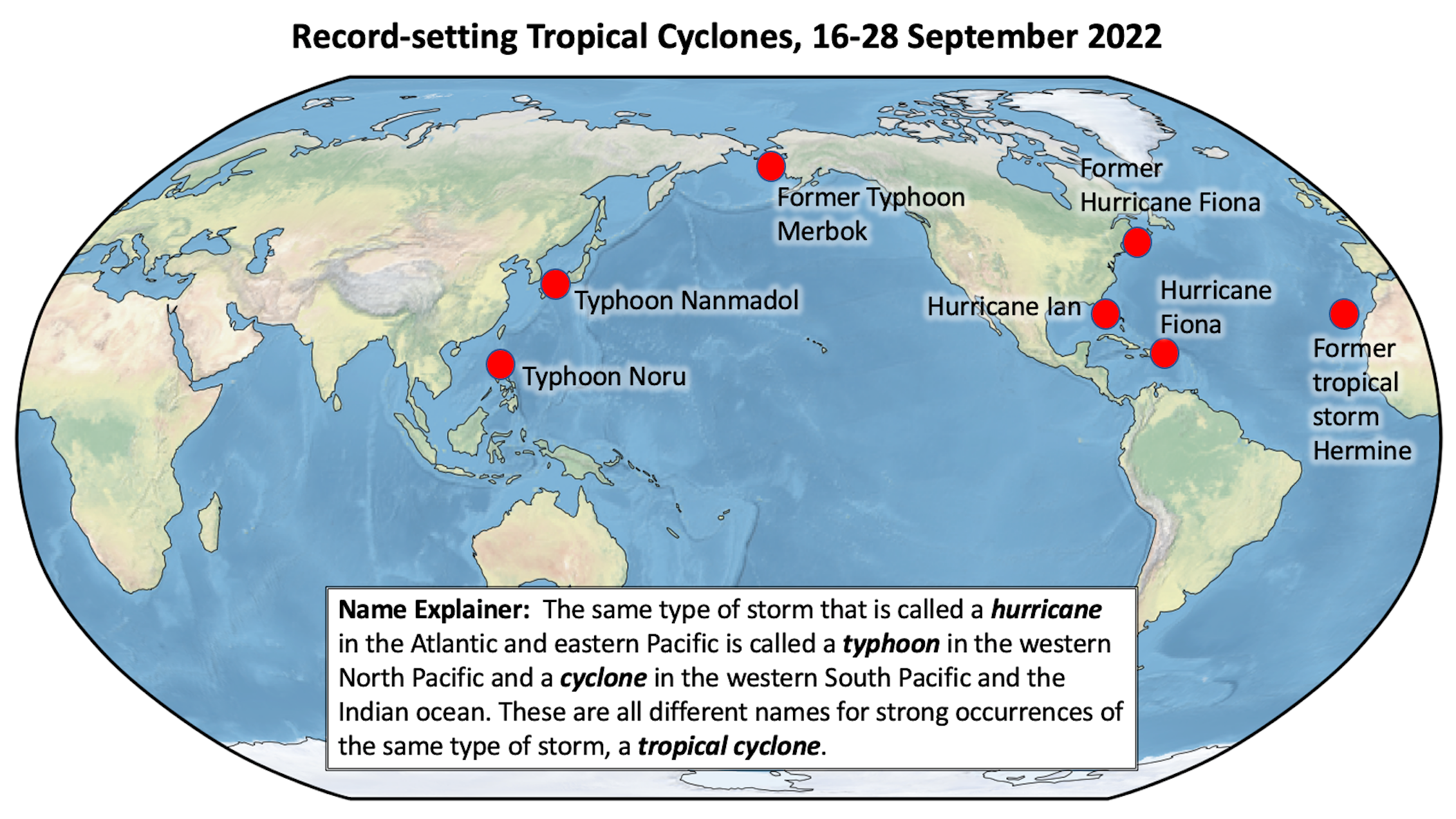 It is clear that climate change increases the upper limit on hurricane strength and rain rate and that it also raises the average sea level and therefore storm surge. The influence on the total number of hurricanes is currently uncertain, as are other aspects. But, as hurricanes occur, we expect more of them to be major storms. Hurricane Ian and other recent storms, including the 2020 Atlantic season, provide a picture of what that can look like.

Our research has focused on hurricanes, climate change and the water cycle for years. Here’s what scientists know so far.

Rainfall: Temperature has a clear influence

The temperature of both the ocean and atmosphere are critical to hurricane development.

Hurricanes are powered by the release of heat when water that evaporates from the ocean’s surface condenses into the storm’s rain.

These are basic physical properties of the climate system, and this simplicity lends a great deal of confidence to scientists’ expectations for storm conditions as the planet warms. The potential for greater evaporation and higher rain rates is true in general for all types of storms, on land or sea.

That basic physical understanding, confirmed in computer simulations of these storms in current and future climates, as well as recent events, leads to high confidence that rainfall rates in hurricanes increase by at least seven percent per degree of warming.

Scientists also have high confidence that wind speeds will increase in a warming climate and that the proportion of storms that intensify into powerful Category 4 or 5 storms will increase. Similar to rainfall rates, increases in intensity are based on the physics of extreme rainfall events.

Damage is exponentially related to wind speed, so more intense storms can have a bigger impact on lives and economies. The damage potential from a Category 4 storm with 150 mph winds, like Ian at landfall, is roughly 256 times that of a category 1 storm with 75 mph winds.

Whether warming causes storms to intensify more rapidly is an active area of research, with some models offering evidence that this will probably happen. One of the challenges is that the world has limited reliable historical data for detecting long-term trends. Atlantic hurricane observations go back to the 1800s, but they’re only considered reliable globally since the 1980s, with satellite coverage.

That said, there is already some evidence that an increase in rapid intensification is distinguishable in the Atlantic.

Within the last two weeks of September 2022, both Noru and Ian exhibited rapid intensification. In the case of Ian, successful forecasts of rapid intensification were issued several days in advance, when the storm was still a tropical depression. They exemplify the significant progress in intensity forecasts in the past few years, although improvements are not uniform.

There is some indication that, on average, the location where storms reach their maximum intensity is moving poleward. This would have important implications for the location of the storms’ main impacts. However, it is still not clear that this trend will continue in the future.

Storm surge – the rise in water at a coast caused by a storm – is related to a number of factors including storm speed, storm size, wind direction and coastal sea bottom topography. Climate change could have at least two important influences.

Speed of movement and potential for stalling

The speed of the storm can be an important factor in total rainfall amounts at a given location: A slower-moving storm, like Hurricane Harvey in 2017, provides a longer period of time for rain to accumulate.

There are indications of a global slowdown in hurricane speed, but the quality of historical data limits understanding at this point, and the possible mechanisms are not yet understood.

Frequency of storms in the future is less clear

How the number of hurricanes that form each year may change is another major question that is not well understood. There is no definitive theory explaining the number of storms in the current climate, or how it will change in the future.

Besides having the right environmental conditions to fuel a storm, the storm has to form from a disturbance in the atmosphere. There is currently a debate in the scientific community about the role of these pre-storm disturbances in determining the number of storms in the current and future climates.

Natural climate variations, such as El Niño and La Niña, also have a substantial impact on whether and where hurricanes develop. How they and other natural variations will change in the future and influence future hurricane activity is a topic of active research.

How much did climate change influence Ian?

Scientists conduct attribution studies on individual storms to gauge how much global warming likely affected them, and those studies are currently underway for Ian.

However, individual attribution studies are not needed to be certain that the storm occurred in an environment that human-caused climate change made more favorable for a stronger, rainier and higher-surge disaster. Human activities will continue to increase the odds for even worse storms, year over year, unless rapid and dramatic reductions in greenhouse gas emissions are undertaken.

Mathew Barlow is a Professor of Climate Science at UMass Lowell.