Fire Breaks Out on Polar Star

The 150-member crew of the U.S. Coast Guard Cutter Polar Star fought a fire on February 10 that broke out in the ship's incinerator room about 650 miles north of McMurdo Sound, Antarctica. 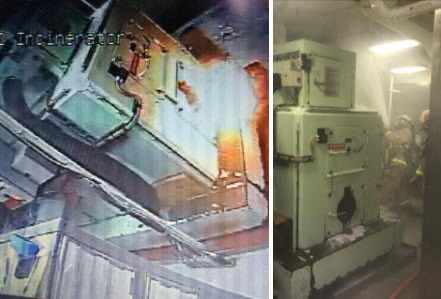 No injuries were reported, and the cause of the fire is under investigation.

Repairs are already being planned for the Polar Star’s upcoming maintenance period. The incinerator will need to be full functional before next year’s mission.

Commissioned in 1976, the 43-year old ship is operating beyond its expected 30-year service life. The Polar Star crew recently completed Operation Deep Freeze, an annual joint military service mission in support of the National Science Foundation. The Polar Star crew departed their homeport of Seattle on November 27 and traveled more than 11,200 miles to Antarctica.

Upon arrival, the Polar Star broke nearly 17 miles of ice, six to 10 feet thick, in order to open a channel through McMurdo Sound. On January 30, the Polar Star escorted the container ship Ocean Giant through the channel, enabling a 10-day offload of nearly 500 containers with 10 million pounds of goods that will resupply McMurdo Station, Amundsen-Scott South Pole Station and other U.S. field camps.

The February 10 fire was not the first engineering casualty faced by the Polar Star crew this deployment. While en route to Antarctica, one of the ship’s electrical systems began to smoke, causing damage to wiring in an electrical switchboard, and one of the ship’s two evaporators used to make drinkable water failed. The electrical switchboard was repaired by the crew, and the ship’s evaporator was repaired after parts were received during a port call in Wellington, New Zealand.

The ship also experienced a leak from the shaft that drives the ship’s propeller, which halted icebreaking operations to send scuba divers into the water to repair the seal around the shaft. A hyperbaric chamber on loan from the U.S. Navy on board the ship allows Coast Guard divers to make external emergency repairs and inspections of the ship’s hull at sea.

Reserved for Operation Deep Freeze each year, the Polar Star spends the Southern Hemisphere summer breaking ice near Antarctica, and when the mission is complete, the Polar Star returns annually to dry dock in order to complete critical maintenance and repairs in preparation for the next Operation Deep Freeze mission. Once out of dry dock, the ship returns to Antarctica, and the cycle repeats.

The Coast Guard has been the sole provider of the nation’s polar icebreaking capability since 1965, and is seeking to increase its icebreaking fleet with six new polar security cutters in order to ensure continued national presence and access to the polar regions.

“While we focus our efforts on creating a peaceful and collaborative environment in the Arctic, we’re also responding to the impacts of increased competition in this strategically important region,” said Adm. Karl Schultz, commandant of the U.S. Coast Guard. “Our continued presence will enable us to reinforce positive opportunities and mitigate negative consequences today and tomorrow.”

After leaving Antarctica, the Polar Star crew arrived in New Zealand for a port call, and they are presently en route to their homeport of Seattle.