The Oregon State Parks authority is responding to reports of debris from a cargo container washing up on the coastline. Beachgoers said they had seen large bags believed to be the contents of a container as well as portions of a container on the beach.

Oregon rangers sent out to investigate confirmed the reports and realized they had a sticky situation on their beaches. “These swollen, gelatinous bags are filled with chia seeds,” they reported leading to numerous jokes on social media.

“Watchia-out for beach debris!,” Oregon Parks posted on their social media accounts. They reported to beachgoers that debris has “sprouted up along the central coast.” One person responded asking if the beach was growing while another said it was a “Chia Beach pet.”

Being serious for a moment, the park rangers said that the chia seeds are not toxic and that they were working hard to clean them up. They also cautioned that the seeds had been soaked in seawater, which unfortunately meant that they had also swelled up.

"The bags were too heavy to move by hand. We had to cut them up to remove them, or use equipment to haul them out," ranger Jason Hennessey told the Statesman Journal newspaper. 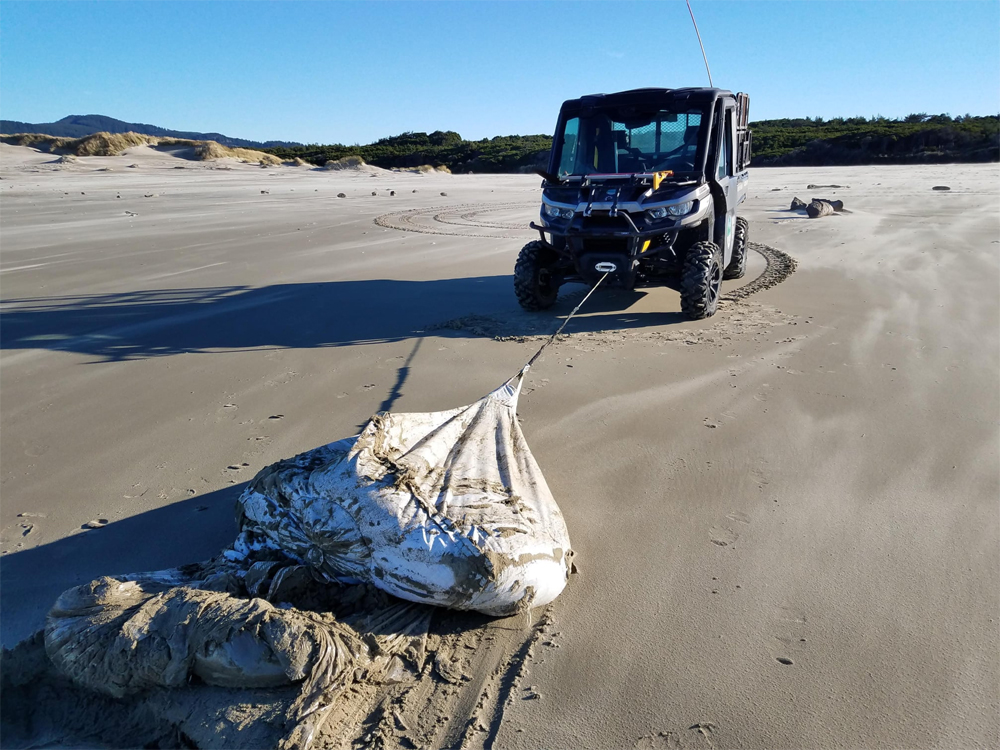 At least four large commercial bags of the seeds have made their way onto the beaches along with portions of the container. Beachgoers were asked if they saw additional debris to report it to the rangers via email.

No determination was made of which ship might have lost the container or how long it has been in the ocean. While the incidents of container losses have been on the decline, according to the World Shipping Council, containers still fall overboard often during storms or high seas.

In recent weeks there have been two high profile incidents both involving containerships operating in the ONE Network. At the end of October, the ONE Aquila lost an unspecified number of containers in the Pacific and diverted to Tacoma, Washington to remove its damaged load before continuing on its voyage to California. A month later, the ONE Apus suffered a loss in the central Pacific of just over 1,800 containers that appears to be a record for the largest number of containers falling overboard from a vessel that was not lost. The ONE Apus returned to Japan.

On December 23, ONE issued a customer advisory on the status of the Apus. After nearly two weeks, ONE reported that only “50 units have been safely discharged,” with the operation proceeding slowly because of the dangers of removing the displaced containers. The company continues to say it anticipates “that it will take some time before the completion of cargo discharge.”