The Lost Boys of Montauk: The True Story of the Wind Blown

In March of 1984, the commercial fishing boat Wind Blown left Montauk Harbor on what should have been a routine offshore voyage. Its captain, a married father of three young boys, was the boat’s owner and leader of the four-man crew, which included two locals and the blue-blooded son of a well-to-do summer family. After a week at sea, the weather suddenly turned, and the foursome collided with a nor’easter. They soon found themselves in the fight of their lives. Tragically, it was a fight they lost. Neither the boat nor the bodies of the men were ever recovered.

The fate of the Wind Blown—the second-worst nautical disaster suffered by a Montauk-based fishing vessel in over a hundred years—has become interwoven with the local folklore of the East End’s year-round population. In "The Lost Boys of Montauk: The True Story of the Wind Blown, Four Men Who Vanished at Sea, and the Survivors They Left Behind," Amanda M. Fairbanks examines the profound shift of Montauk from a working-class village—“a drinking town with a fishing problem”—to a playground for the ultra-wealthy, seeking out the reasons why an event more than three decades old remains so startlingly vivid in people’s minds. 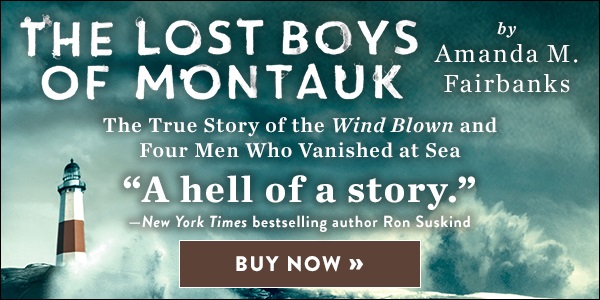 The following is an excerpt from "The Lost Boys of Montauk," available now in hardcover, e-book and audiobook formats.

On March 22, 1984, the Wind Blown, a commercial fishing boat, departed from Montauk Harbor on eastern Long Island around dusk to begin its first trip of the early-spring season. The four-man crew planned a weeklong trip to catch tilefish about 120 miles offshore. It was a gray, frigid, forty-degree afternoon. A light easterly wind indicated the possibility of a brewing storm, but it was nothing that Captain Michael Stedman thought his sixty-five-foot, steel-hulled boat couldn’t handle. Back then, even vaguely reliable long-term weather forecasting didn’t exist. Offshore fishermen received twice-daily weather updates on single side-band radios. And if you weren’t standing in your wheelhouse at five o’clock in the morning and eleven o’clock at night, your radio tuned to channel 2670, you missed it. For commercial fishermen, as Mike knew firsthand, a little weather was nothing to fear—an occupational hazard if ever there was one. Besides, if things got really bad, he could always run back to the harbor and ride out the storm. It was Mike’s fourth or fifth offshore trip aboard the Wind Blown, and the young, relatively inexperienced crew hadn’t yet jelled. The foursome was still figuring out how best to work together. Mike had purchased the Wind Blown only months prior, after years spent working on other men’s boats. At long last, he was the captain of his own vessel and in control of his own destiny—financial and otherwise. Captain Mike answered to no one but himself.

The year 1984 was the height of the commercial tile fishing boom— right in the sweet spot of a decade-long East Coast–fishing gold rush that spanned from the late 1970s to the late 1980s. Historic numbers of golden tilefish flooded the North Atlantic. It was pretty much a guaranteed bonanza for anyone who geared up, went out, and did it. Back in those days, baited circle hooks pulled in thirty- to forty-pound tilefish. It was like plucking money from the sea: soaking-wet dollar bills that reeked of rotten fish guts. Depending on the going price and grade of tilefish, a successful offshore trip promised a longlining crew anywhere from $15,000 to $30,000. Once they pulled back into the docks, the crew filled cardboard cartons like bakers frosting a layer cake: ice, tilefish, ice, tilefish. Whatever landed in Montauk traveled the length of fish-shaped Long Island by truck to the Fulton Fish Market in Lower Manhattan, where it was sold through brokers, mostly to Chinese and Korean buyers. What the commercial fisherman gained in freedom, he lost in transparency, since the pricing structure, like the catch, fluctuated according to supply and quality and freshness—to say nothing of the weather and proximity to holidays and school vacations.

Though the Fulton Fish Market has since moved to the Bronx, nearly all of Long Island’s annual catch still ends up there. Haggling was the name of the game; the difference of thirty cents a pound could make or break a twenty-thousand-pound haul. Decades prior, the Mafia had taken control of the Fulton Fish Market, seeing it as an ideal, all-cash business for laundering money. The truck driver eventually returned to Montauk carrying thick wads of cash. Receipts in hand, each boat owner first subtracted the cost of the trip. In 1984, a typical week offshore ran about $5,000 for food, fuel, and ice. No one got paid until the crew had hosed their vessel clean of blood, dirt, and rusted fishhooks. Cash was king. Some years, owners pulled in upwards of a quarter of a million dollars. Then as now, commercial fishermen weren’t salaried employees. Deckhands worked for a share of the catch—less the owner’s and captain’s slices of the pie (typically an equal split). Any fish that wasn’t the target species  (in this case, golden tilefish) went into a separate cardboard box the crew labeled shack money. The deckhands kept the profits from whatever they caught that wasn’t the target species. (A seventy-five-pound swordfish, at five dollars a pound, netted a sizable chunk of change.)

Two of the four men on the Wind Blown—Michael Stedman and David Connick—were an improbable pair to have joined forces on an offshore commercial fishing boat. Most Montauk fishermen come from working- class families. Few attend private schools. Blue-blooded pedigrees are rarer still. Mike was the thirty-two-year-old son of a Harvard-educated United Nations civil servant. Dave, his twenty-two-year-old mate, was the son of an affluent New York family who belonged to the Maidstone Club and owned a weekend house, south of the highway, in East Hampton. Though separated by nearly a decade, Mike and Dave were like brothers, the privileged sons of powerful, domineering fathers. It was a different era, and their fathers had a lot in common. Both were white-collar men who liked to drink and had wandering eyes. For Mike and Dave, nothing was less appealing than the dry-cleaned suits and suspenders their fathers wore to the office every morning. Social climbing and cocktail- party banter made their skin crawl. The decision to become commercial fishermen was an act of defiance, a discarding of their inheritance. Mike and Dave showed their rebellion by growing chin-length hair, streaked by the sun. Unlike their fathers’, their athletic, sinewy bodies were the result not of playing regular games of tennis or golf, but years of riding waves.

Most Montauk fishermen don’t surf. Some don’t even know how to swim. In that regard, Mike and Dave were outliers too. If they weren’t offshore fishing and the surf was breaking, they could be found at Georgica Beach in East Hampton or Ditch Plains in Montauk—out in the water, straddling their surfboards, their torsos facing the horizon, waiting for another set to roll in—part of a small, insular tribe of eastern Long Island surfers. The two other men on the Wind Blown’s final voyage, Michael Vigilant and Scott Clarke, were young, enthusiastic deckhands from scrappy, hardscrabble families. They were busy sharpening their skills and putting in their time, eager to someday become captains of their own vessels.

Michael Vigilant, the nineteen-year-old son of a commercial fisherman, was a familiar face around the docks but new to the Wind Blown crew. He was filling in until Tom McGivern, one of the original Wind Blown crew members, returned from a surfing trip to the Canary Islands. At eighteen, Scott Clarke was the fourth and youngest crew member. A relative newcomer to Montauk, Scott was already well on his way to cementing his reputation as a young man with an ironclad work ethic who wasn’t afraid to get his hands dirty.

As lowly deckhands, Michael and Scott were enticed by the cash they might make. Every offshore trip was a bit like gambling, albeit with the advantage of a stacked deck. Each crew member stood to make between $2,500 and $5,000 for a week of work. With three to four trips each month, the money added up. Even so, the three youngest members of the Wind Blown crew (lacking mortgages and young mouths to feed) could easily drink through it in a week’s time. Already the father of three sons, Captain Mike didn’t have the luxury of pissing away a week’s worth of wages. He occupied a separate tier of the hierarchy altogether. As owner and boss, his rank entitled him to an additional percentage of whatever he and his crew hauled back to shore.

But the pull wasn’t only about the money. It was about the spirit of the thing. Hundreds of miles offshore, different rules applied. Aboard the Wind Blown, no matter the foursome’s divergent social classes, a brotherhood had started to form. And not by accident, but on purpose: their very lives depended on it.

This excerpt is sponsored by Gallery Books, an imprint of Simon & Schuster. If you would like to continue reading "The Lost Boys of Montauk," please click here.