The Danny F II sank in December 2009, but Panama’s investigation report was not sent to the IMO until July 2013, and as yet Panama has not agreed for it to be made public on the internet.

The vessel capsized in adverse weather about 15 miles off the coast of Lebanon. When rescue operations ceased some 72 hours later, 40 men had been rescued, 11 had been found dead and 32 remained missing.

The vessel had sailed from the Port of Montevideo, Uruguay, and was destined to discharge livestock at the Port of Tartous, Syria. It was carrying 10,274 sheep and 17,932 cattle, all of which perished at sea.

Sheep and cattle need to continually burp and fart in order to maintain digestive functioning. They can’t do this while swimming, and, along with the weather conditions, their gas-filled bodies are said to have hampered rescue efforts. One reason for this was that the men’s heads would have been hard to spot amidst the bloated bellies of the livestock drowning alongside them in the water.

The crewmen, including 56 livestock attendants, were from the U.K., Russia, Lebanon, Syria, the Philippines, Pakistan, Uruguay, Brazil and Australia. Mostly it was the non-marine crew who were lost, and one unofficial report indicates that their bodies were never expatriated back to their homelands.

One exception was the Australian on board – a famous stockman renowned throughout the industry as the gentle giant who cared about animals deeply. His family allegedly searched morgues in the region. No Caucasian was listed in their records, but his body was eventually found with a covering of oil making his skin appear darker than it was.

The presence of oil in the water was not mentioned in Panama’s investigation report, but it was rumored that the vessel’s shell broke during the capsize, releasing oil and trapped livestock into the water.

Piecing the Story Together

By the time Panama’s designated accident investigators arrived, most of the survivors had gone home. Only a few were interviewed, and the investigators pieced events together from a variety of sources.

The vessel was at anchorage waiting for a berth when the weather worsened. The master decided to leave anchorage, and he gave the order to clean decks six to one, presumably as a result of the growing amount of animal feces on board after the delay in getting the livestock discharged in port.

Approximately 10 hoses were being used to clean the decks, and small openings were reported to be open so that the sewage could be washed straight into the sea. The vessel already had a list of three to five degrees, but as the list increased the master ordered cleaning operations to cease.

Prior to the capsize, a lot of water was reported on deck six. The master attempted to turn the ship to correct the list without success. There were five cattle pumps on the ship, the most powerful was out of service at the time, and another two were being used to supply water to the livestock which had to be fed and watered manually, as the vessel lacked the automated systems found on some modern vessels.

When the list exceeded 20 degrees, the master apparently ordered the engines to be stopped (presumably in anticipation of the vessel’s imminent capsize). He gave the order to abandon ship and sent a distress signal.

The vessel capsized within 20 minutes of the main engines being stopped and took approximately three minutes to disappear below the waves.

The investigation report states that not all crew heard the abandon ship alarm. There seemed to be a lack coordination and chaos. The crew were not mustered, and one crew member was described as remaining on a cargo deck smoking a cigarette waving good-bye to the remaining crew running to the weather deck. Some started throwing life rafts, and some jumped into the water. 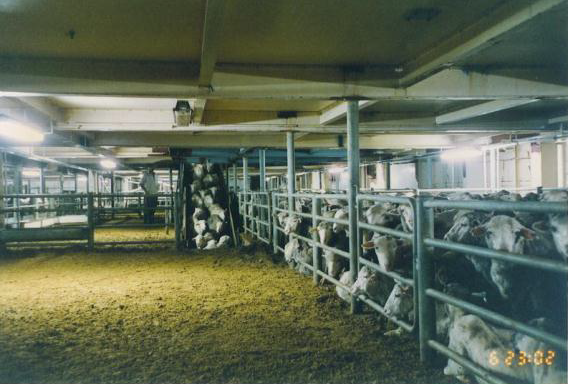 Panama says that the key events in the sinking were:

1. Water ingress through hull openings when cleaning of decks

2. Possible breaking of movable fenders in animal pens, since fenders were in fair condition and easy to break.

3. Cargo shifting as vessel listed to starboard side.

5. The ship continues to heel until she capsized.

The investigation report notes that the ship lost stability gradually during the voyage as fuel, water and animal food pellets were consumed. At the time of departure, as well as during the course of the voyage, the stability of the ship should have been monitored. Calculations of stability were apparently the responsibility of the master, although these responsibilities were not clearly specified in the vessel’s manuals.

It is believed that one or more hull openings were open or broken during the heavy weather experienced by the vessel, but the investigation notes that the Danny F II had a history of deficiencies related to hull openings. Prior to the capsize, water was reported to have entered deck six, and the report notes that livestock waste could have blocked the scuppers on that deck.

Water was entering the vessel on every roll, increasing the free surface effect of the water on board and further reducing the ship’s stability. Under these conditions, some of the livestock could have broken out of their pens – which were closed by “small” chains.

Simulations conducted as part of the investigation suggest that if approximately 30 cattle moved 10 meters either port or starboard from their pen, the vessel would list by about half a degree from upright. If 300 cattle moved just five meters, the list would be over three degrees. 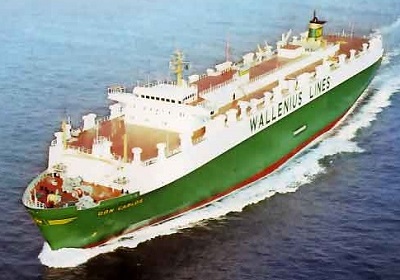 The Danny F II had 12 cargo decks. It was delivered as the car carrier Don Carlos in 1976. In 1994, she was renamed Danny F II and converted to be a livestock carrier. The investigation report states that the conversion was designed by Estudio R. Fonquerny of Argentina and carried out by Pan United Shipyards in Singapore under the supervision of class society RINA.

In 1995, she was sold to Rachid Fares Enterprises of Australia and registered with Monrovia. In 2000, she was reflagged to St. Vincent and the Grenadines, and then in 2005 she was transferred to Panama with a new owning entity, Falcon Point International Corp. of Panama. At the time of her loss, she was managed by Rabunion Maritime Agency of Lebanon and classed by Isthmus Bureau of Shipping of Panama. The investigation report notes that during 2009, the year of her sinking, she changed class three times.

The Danny F II was detained by the Australian Maritime Safety Authority in 1997 for deficiencies including bulkhead corrosion, defective radio equipment and a defective watertight door.

In 2003, Australia again found deficiencies including hull damage affecting the vessel’s seaworthiness and several relating to life-saving equipment. In 2004, deficiencies found in Australia included deck and bulkhead corrosion and the fact that lifeboat drills had not been carried out for more than three months.

The last time the Danny F II was subject to a livestock preloading inspection in Australia was in December 2004. Areas of non-compliance with Australia’s Marine Order 43 relating to livestock carriers needed to be addressed if the vessel was to operate in Australian waters beyond January 2005. She was not brought into compliance and was subsequently sold and did not return to Australia.

An inspection by Jordan in 2006 noted hull corrosion, and later that year China noted deficiencies, amongst other things, in the conducting of life boat drills. The following year three other flag states found deficiencies.

In January 2009, the year she sank, the Danny F II was detained in Portugal. The deficiencies included corrosion, problems with water-tight doors and problems with lifesaving equipment. Deficiencies were also reported by Lebanon later that year.

Panama says the lessons to be learned for livestock carriers from the sinking are:

1. The need to review class requirements for livestock fleet which does not exist nowadays.

2. The need for consideration of manning and training requirements of marine and non-marine crew on board livestock carriers.

3. The correct implementation of a Safety Management System should be guaranteed by the crew on board in order to assure that the person responsible for the stability calculation complies with his duty for navigation safety purposes.

Charles Boyle, Director of Legal Services for the U.K. professional trade organization Nautilus International, says: “The Danny F II had trouble in Australia. It had a history of detentions for safety issues. These foreshadow the event, and one wonders whether proper heed was taken of any previous detentions by port state control and whether any of this would have helped in the end.”

Allan Graveson, Senior National Secretary at Nautilus International, describes Panama’s investigation report as mere verbiage and the Danny F II as scrap tonnage that shouldn’t have been at sea. Such vessels continue to sail, and it’s disgusting, says Graveson. Nautilus International joined crew families in pressuring Panama to publish the report, which many claim should have been submitted to IMO much sooner.

The loss of the Danny F II was considered by the IMO at the first session of the Subcommittee on Implementation of IMO Instruments (III-1) in 2014. Australia did not make formal written submissions to III-1 recommending that Australian standards for livestock ships be adopted internationally. However, the working group on Casualty Analysis (which was part of the III-1 meeting) noted in their report that only Australia had developed rules to address the carriage and handling of livestock.

As part of the consideration of the report of the working group, Australia intervened to support the working group recommendation that III-1 bring the fact that there were no internationally accepted standards for livestock carriers to the attention of the Maritime Safety Committee. This was agreed by III-1.

III-3, this year, looked again into the issue of making accident investigation reports public. The Subcommittee reviewed access rights to casualty-related information for seafarers’ training and education, in particular, reports of investigations into serious casualties, which are available on the publicly accessible casualty module of IMO’s Global Integrated Shipping Information System (GISIS). It was agreed that, in future, reports of investigations into casualties required under the Casualty Investigation Code would be made public, by default, while allowing reporting States to amend the release status of their own reports.

Meanwhile, today’s livestock carrier fleet consists of around 120 vessels, many of them converted ro-ros, container ships or tankers. The fleet is the oldest saltwater segment in the industry.

Of those, 30, including 28 conversions, are flagged by Panama. The average age of Panama’s livestock carrier fleet is 34 years. Panama says that its oldest vessel, Kalymnian Express, is a 52-year-old conversion. She was detained in Australia in 1998. She was also subject to an Australian investigation for a high livestock mortality event that occurred in December 1999. The required rectification work was not carried out, and the vessel was not able to operate as a livestock carrier in Australia again.