After working at Royal Caribbean Line (RCL) for 24 years, Anders Aasen made a decision to join Triton Emission Solutions as its CEO. This well-respected industry veteran left the rest of the industry wondering why. Why would he decide to take such a risk, leaving the security of the one of the world’s most preeminent cruise lines to head a small technology startup?

When asked, Aasen cited the founder of Triton Emission Solutions, Rasmus Norling, saying: “Rasmus and I had worked together for over 10 years at RCL. He was always very innovative and an outside-of-the-box thinker. When he approached me with this opportunity, I was not looking to make a move and was skeptical as well. After so many years with an owner, for me it was “show me the numbers.” When you look at the early test results, it is obvious that this technology will be a game-changer in emissions reductions. So the decision to join was clear for me and I am excited about what is to come.”

As the newly appointed CEO of Triton Emission Solutions, he is bringing to market what he believes is the best option for meeting SOx emissions requirements. The DSOX-20 is a scrubber, but not the conventional exhaust gas scrubber. It is a fuel scrubber. The Triton fuel scrubber removes the sulfur prior to its entry into a ship’s engines and is truly revolutionary, says Aasen. 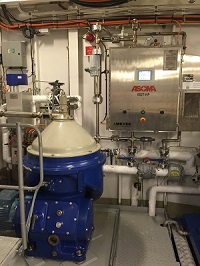 “At RCL my efforts were focused on onboard operation, newbuilds and technical service.  Over those 24 years the industry’s focus on emission control and abatement technologies grew exponentially. My team was pivotal in RCL’s research and development, selection and adoption of emission technologies, so having that hands-on, real-world experience exposed me to the universe of technology offerings and provided first-hand knowledge of what works and, more importantly, what doesn’t.”

Aasen was and still is a true pioneer in this field because of his passion and devotion to finding a true solution for the environmental challenges the industry is faced with today. Back in 2009 his research and development team embarked on a scrubber project, and by 2010 RCL became one of the first cruise lines to install a scrubber. He has been closely involved with all the advancements with this technology over the years, making him a true subject matter expert.

Aasen’s experience is not limited to scrubbers although it was his focus, during his time at RCL. He led a team of 32 industry specialists in electrical systems, HVAC, power plant, azipods, piping and water production systems, galley systems and recreational water facilities. Additionally, he was responsible for the company’s ship maintenance team consisting of 430 global personnel.

Now that pioneering spirit is being applied to Triton’s DSOX-20 system and the company’s first shipboard installation.

“We are very pleased with the global interest in our technology. We have completed our first shipboard installation and are currently commissioning the system as we speak. It is a bit premature to discuss results from that installation, but I can share with you a test that we conducted in our lab, which was witnessed by the classification society DNV GL. The test demonstrated that our technology was able to take fuel with 2.7 percent sulfur down to 0.27 percent sulfur. So we are very excited and confident in our technology, I am really looking forward to updating the public with new data points in the near future.”

Triton’s DSOX-20 system is a patent-pending, pre-combustion de-sulfurization technology designed to remove alkali metals such as sulfur and sodium from heavy marine fuel. It is suitable for a wide range of vessels including cruise, cargo and tanker ships. 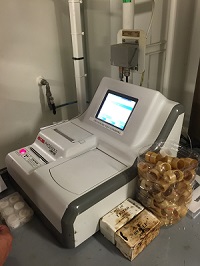 DSOX-20 can be installed on a ship without disruption to its operations as a completely independent fuel treatment system with its own fuel oil separators and fuel quality-monitoring system.

The system does not reduce CO2 or NOx. “For that we have a small scrubber, NJORD. The difference between traditional fuel emulsion technologies and DSOX-20 is that we use the emulsion as one of our processes to break up the sulfur. The water is then separated out from the fuel before it goes back into a storage tank.” That means the emulsion does not reach the engine.

As Aasen sees it, there are three strategies for meeting the emission requirements within ECAs:

1)    Do nothing and resign yourself to utilizing expensive distillate fuel, which historically costs 25-50 percent more than traditional heavy fuel oil.
2)    Install an exhaust gas scrubber to capture the sulfur in the exhaust stack, an effective but costly alternative that requires lots of valuable real estate on board.
3)    Shore power (cold ironing), which is limited to port operations and only available in a small number of ports globally.

Triton is now offering a new strategy, claimed to be a much more cost-effective solution, which requires a small amount of space and can work with their scrubber, NJORD, or with any pre-installed scrubber. Triton’s goal is to completely eliminate the need for the exhaust scrubber. Based on the latest results, Triton is confident that this is an attainable goal. 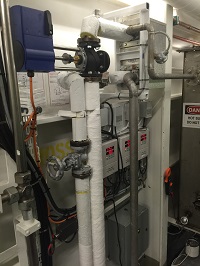 “We are optimistic that our pre-combustion DSOX-20 fuel scrubber, on its own, can remove the sulfur to the current and future levels required by the IMO,” he says. “However, if we find that we are not able to remove all of the sulfur pre-combustion, our exhaust gas scrubber NJORD is available. NJORD is much smaller than competitor scrubbers and can be installed in-service due to the fact that we have removed most of the sulfur prior to combustion.

“Addressing the financial challenges that shipowners are faced with for selecting and fitting an emission abatement technology was my focus over the last six years at RCL, so I am knowledgeable in regards to the questions and concerns of our customers as I have asked them all myself. I was part of growing the RCL fleet from six ships to 43.

“So you can say I grew with the fleet as well, personally and professionally. I cared for those ships like they were my own. When I was weighing this opportunity with Triton, it came down to one question: Would I put this system on my fleet? Based on my new position, I imagine you can guess the answer to that question,” he said.

Aasen started in his new position in March, and his main focus for this year is to continue to perfect the DSOX-20 and NJORD systems.

The founder of Triton Emission Solutions, Rasmus Norling, is considered one of, if not the brightest mind in the exhaust gas scrubber sector, says Aasen. Norling spent 11 years at Royal Caribbean and worked closely with Aasen for the last two years he was there. 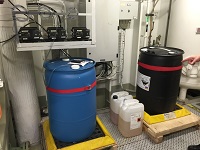 “I was actually Rasmus’ boss. His strengths are in technology development, and he is brilliant in this area. However, after he started Triton he found himself spending far too much of his time on organizational, administrative and regulatory tasks rather than doing what he loves, which is developing technology and problem-solving.”

Interacting with customers, classification societies, the EPA, the U.S. Coast Guard, plus as a publicly traded company, there were tremendous amounts of additional requirements for filings and reporting that was taking up far too much of Rasmus’ time. “Rasmus recognized that, to get this company to the next level, he had to have someone come in and take over this part of the business. That’s when he invited me to join as the CEO, and he became the Chief Technology Officer.

“In the short time since I have been CEO we have made huge progress, not just because of me but because we now have a tremendous global team assembled. It’s amazing what can be accomplished when you have the right people in the right positions.”

Aasen continues, “The respect and collaboration Rasmus and I have today is the same we had just a few years ago. We both know each other very well and the trust was built in, so the transition into the company has been flawless. I couldn’t be happier.”