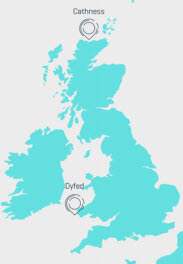 The company has established a joint venture with DP Energy to evaluate the potential of two sites, one in Scotland, the other in Wales, and if successful, they could be up and running by 2020.

MarEx spoke to Chris McConville, General Manager of FPP, to find out more:

What is unique about the technology?

It is the only offshore hybrid system, combining two different generating technologies on a single platform, to have been built and deployed in an operational environment.

The system also has a key feature of improving accessibility thanks to the breakwater or harbor effect of the wave energy absorbers. This creates an area of calm water at the tail of the platform compared to the open sea, which allows for a very safe personnel transfer when conducting routine maintenance and repairs offshore, and for a greater number of hours per year than is seen in conventional offshore wind.

How does it work?

FPP’s system is based around a semi-submersible structure which provides a stable platform on which to mount a standard offshore wind turbine generator (WTG) between five and eight MW in capacity.

In addition, the platform provides a base for four of FPP’s patented wave energy convertors (WEC) which uses a uniquely shaped absorber fixed in a channel in the platform, each producing between 500 and 900kW (depending on available resource at the project site).

This results in between two and 3.6MW of wave power, giving a total platform capacity of between seven and 11.6MW, although it is possible that the platform could support even larger WTGs.

How has it been tested?

The overall concept was tested at half scale in Danish waters over the course of four test periods totalling two years, including a fully grid connected test meaning it is the first such hybrid technology to deliver compliant power to the grid. During the test the platform experienced one of the worst storms in Danish records, helping prove the survivability of the systems.

Who developed the concept?

The original concept was conceived by Hans Marius Pedersen in the mid 1990’s and was gradually developed until the formation of FPP A/S in 2004, which took over activities and in 2007 was transferred the IP rights. Hans Marius Pedersen remains involved in FPP as a significant shareholder.

How cost effective is it to make and then to operate?

Considering comparable technologies the power efficiency of the system is very high, thanks to the ability to exploit high energy deep water sites where the wind turbine ca operate more effectively.

The wave energy convertor is also very efficient compared with other wave devices, thanks to the simple but effective design of the wave absorber.

Cost effectiveness in energy is measure as the Levelised Cost of Energy (LCOE) which indicates a cost per unit of electricity (€/MWh). This actual value is highly dependent on the project site and the available resource. However in sites with a medium to high level of wave energy FPP’s system can compete with fixed offshore wind, as demonstrated by cost modelling which has been independently quality assured.

What potential do you see for the future?

FPP’s primary focus is on the utility scale power generation market, more specifically on offshore sites which have a medium to high level of wave energy where fixed offshore and traditional floating offshore wind have operational constraints due to the impact of the wave regime. The growth that the offshore wind market has experienced in the last decade is forecast, and politically desired, to continue. However, to achieve this a shift to floating wind foundations is required as suitable traditional, shallow water sites are fully utilized.

What is the status of the project now?

Both of these projects are currently undergoing a screening exercise after which they will be developed consecutively with the first going straight onto scoping. The project will be developed in stages, starting with the deployment of a single “demonstrator” unit, before deploying a further three to four units to form a small array. Following this process of risk mitigation and technology proving the project will then seek to expand to a commercial scale of >200MW.