Live Export: Only Telling Part of the Story

Unlike other shipping segments, the live export industry doesn’t consider their equivalent of the Costa Concordia, Deepwater Horizon or MOL Comfort when evaluating their performance.

A scientific paper published in the Australian Veterinary Journal in 2015 graphed average annual voyage mortality rates but excluded voyages that had animal mortality rates of 26-77 percent. These were:

* Charolais Express 1998 (346 cattle died at sea due to inadequate ventilation and heavy weather; another 50 cattle died in a Jordanian port and a further 174 were rejected by Jordan and disposed of at sea.)

* Temburong 1999 (a power loss and ventilation failure saw the death of 829 cattle out of approximately 1,100)

Veterinarian Dr Sue Foster from the animal welfare group Vets Against Live Export (VALE) says that removing these voyages from data analysis might be acceptable from a statistical perspective, but failure to consider these voyages as a special data set in a study on risk factors for cattle mortality at sea is a huge oversight.

“Of the eight high mortality voyages investigated after the study period, seven were due to the factors involved in these outliers and not due to risk factors identified by examining ‘average’ data,” she said. 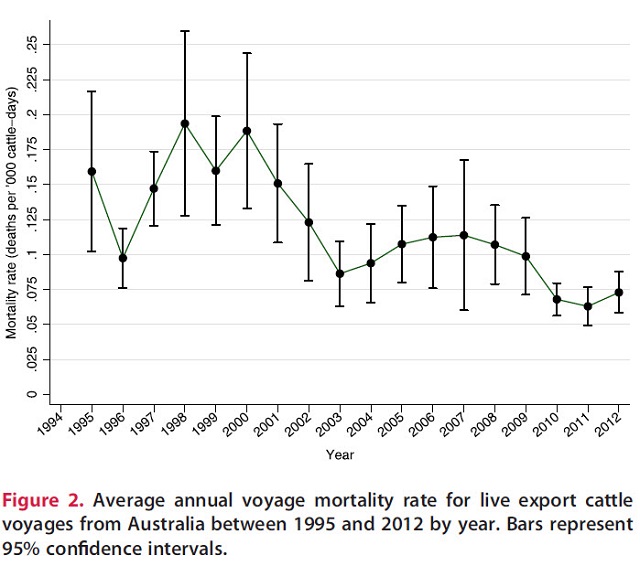 Source: Risk factors for mortality in cattle during live export from Australia by sea, 2015

Perhaps one of the most famous international incidents with live export cattle, not covered in the 2015 study as it was not carrying Australian animals, was the sinking of the Danny FII, a converted ro-ro, in Force 9 winds a week before Christmas in 2009. The captain went down with the ship, 12 crew members (including a popular Australian stockman) were later confirmed drowned, and 32 are still missing. There were 17,932 cattle and 10,274 sheep from South America on board that also died.

A short-haul voyage, less than 11 days in duration, is considered high mortality if more than 0.5 percent of the cattle on board die. The figure is one percent for cattle on long-haul voyages.

“Most routine voyage mortality in cattle is due to bovine respiratory disease and lameness, but heat stress has historically been and still appears to be a major cause of high mortality incidents as are supposedly special events such as mechanical failures or weather extremes,” says Foster.

Heat stress was found to not be a major cause of cattle mortality in a post-mortem study published in the Journal of Veterinary Diagnostic Investigation in 2014. However, says Foster, the study’s data was skewed and this conclusion unsound. There was no discussion of the one high mortality voyage that occurred, despite heat stress being identified as a major contributing factor by the onboard veterinarian. There were only a small number of samples (a 3.8 percent sampling rate) provided from that voyage despite having the highest mortality rate of all voyages included in the study.

“Regardless, the study’s authors highlighted the lack of data made available by government and industry on temperature, humidity and other risk factors during voyages. By excluding outliers, analysing skewed/biased data and not having adequate data available, the industry is missing an opportunity to improve its understanding of the issues,” says Foster.

Based on the graph it appears that the average voyage mortality has improved by about one percent. Much of this improvement has been due to changes in the type of cattle sent for live export with older heavier slaughter cattle replaced with younger, lighter feeeder cattle. Some improvement was also seen when conditions were placed on cattle exports from southern hemisphere winters to northern hemisphere summers. However, these voyages still occur, and VALE has shipping data that show routine carriage of animals from Portland and Adelaide, Australia, in winter to the Middle East, she says. 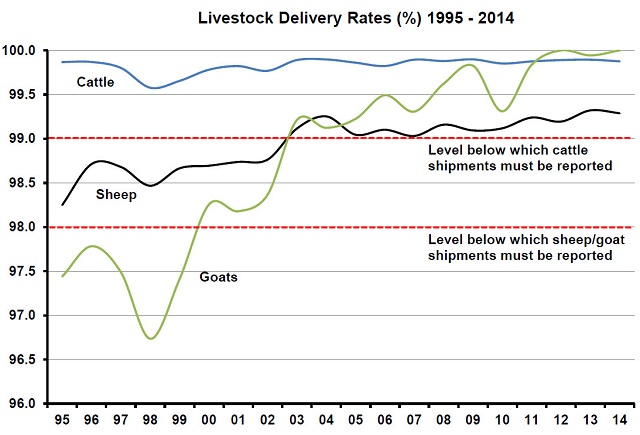 High mortality incidents continue to occur, indicating there is still room for improvement, conclude the authors of the 2015 Meat & Livestock Australia and LiveCorp-funded study, who indicate the potential for more modern livestock carriers to have a positive effect.

Exporters comply with the statutory reporting requirements set out in Australian Standards for the Export of Livestock, both during export and after livestock have reached their destination. If an exporter reports a voyage mortality rate greater than the legislated levels, the Department of Agriculture undertakes an investigation which can result in regulatory action.

For the most recently published reporting period, the second half of 2015, no reportable mortalities occurred. This is information tabled in the Australian Parliament every six months and available online.

Therefore, says the  Australian Livestock Exporters' Council, any claim that only “half the story” is being told regarding mortalities is false. CEO Simon Westaway says the investment being made in modernizing the Australian livestock export fleet isn’t just limited to the significant number of new vessels now operating in the trade. “It includes the ongoing upgrade and refurbishment of existing vessels to embrace modern feeding, watering and ventilation systems,” he says.

“Over and above the obvious imperatives of meeting the welfare benchmarks set out in Australian Standards for the Export of Livestock, exporters are governed by another inescapable rule – the sustainability and profitability of any export business is entirely dependent on the health of the livestock it delivers to its customers overseas.

“The Australian livestock export industry is the global leader in transport standards and welfare outcomes and, driven by the value of Australian livestock in overseas markets, fit and healthy animals are absolute non-negotiables in terms of an exporter’s operational success.”

The average age of the livestock carrier fleet puts it amongst the oldest in shipping; only Lakers are, on average, older.

“This, therefore, makes the fleet one of the oldest sectors in shipping with the average age of the fleet at around 35 years old.

“As regulations determining livestock transport have become more stringent, especially those issued by the Australian Maritime Safety Authority (AMSA), the cost benefits of converting versus newbuilding has become less of an attraction with nine new vessels hitting the water in the last five years.

“Wellard Ships and Vroon are the two owners which dominate in the modern tonnage sector ordering new, rather than relying on conversions. Middle Eastern owners are dominating the ageing tonnage (50+ years) category.”

New purpose-built vessels have been designed to maximise animal welfare along with crew safety. A number of the Wellard vessels have two independent propulsion systems, which means that even if one engine fails the vessels can still operate. 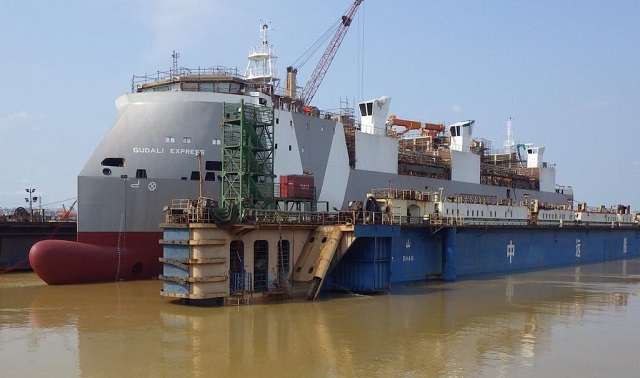 The Gudali Express, delivered in April this year, is the seventh newbuilding livestock carrier to be built for Vroon in China.

“There has been an increasing preference towards closed rather than open livestock carriers, where animals are contained in pens on an open deck,” says Kent. “Although this means that the animals are not exposed directly to the elements, being in pens within the ships hold, ventilation and temperature control become a crucial issue.”

The safe carriage of livestock aboard vessels is a matter that AMSA takes very seriously. Marine Order 43 (Cargo and cargo handling – livestock) has been progressive updated since it was first adopted in 1982 to ensure the regulations remain effective.

The requirements for ventilation systems include minimum times for air replacement in different configurations of livestock compartments, minimum air velocity, adequate separation measures to ensure minimal recirculation of intake and exhaust air, the provision of spare parts and redundancy of ventilation control systems.

In general, livestock ships have a lower deficiency per inspection rate of 2.33 compared to a rate of 2.46 for other vessel types when non-livestock specific data is considered.

No livestock carriers fly the Australian flag, and AMSA’s power to police the industry came under fire in 2008 when it was unsuccessful in a legal case against a Kuwaiti shipping company accused of running livestock ships without adequate sewage provision. The Livestock Transport and Trade company took AMSA to court after it refused to issue the Fremantle-docked ship Al Messilah with a certificate allowing it to load 72,000 live sheep in Victoria before travelling back to the Middle East.

AMSA lost the case in the Federal Court in Western Australia because of differences in regulations applying to Australian and foreign flagged vessels. The sheep were eventually loaded and shipped.

However, AMSA successfully appealed the initial judgement to the full bench of the Federal Court. This decision was handed down in February 2009, and  the original decision was overturned. AMSA was awarded costs for both actions. Since that decision all Kuwait Livestock Transport & Trading ships have been required to comply with Marine Order 43.

Despite a number of newer vessels entering the fleet, engine breakdowns continue. Wellard’s Ocean Swagman and Ocean Outback, both launched in 2010, suffered engine breakdowns within days of each other in January this year. Over 7,400 sheep and over 5,600 cattle were stuck on the Ocean Outback for 11 days after it was due to leave Fremantle for Israel. Over 30 animals were reported to have died during the wait in port.

However, the Australian Livestock Exporters' Council says that information about the livestock mortalities recorded on the Ocean Outback (three cattle, 30 sheep) over the period were released publicly, and there was no suggestion from the veterinarians who inspected the stock that the mortality risk was exacerbated by the delay. The 7,400 sheep and 5,600 cattle’s supply of food, clean water and fresh air wasn’t compromised during the delay.

The animals on board were found to be in good health by the Australian Government-accredited veterinarian and fully qualified stockmen on board, as well as the Western Australia Government veterinary officer and local RSPCA representative who also conducted inspections, says the Council.

More recently, in August this year, VALE was again concerned about the Al Messilah that AMSA was unsuccessful in stopping back in 2008. The vessel, built in 1980, was converted from a car carrier in 1995. Foster says the vessel may have sailed from Fremantle with a trim that would have been inconsistent with Marine Orders 43. “Based on the Plimsoll line, this ship appeared lower at the bow but would likely drain from the stern,” says Foster, who reported the incident to AMSA. The vessel sailed from Fremantle, during the southern hemisphere winter heading into the height of a Middle Eastern summer… 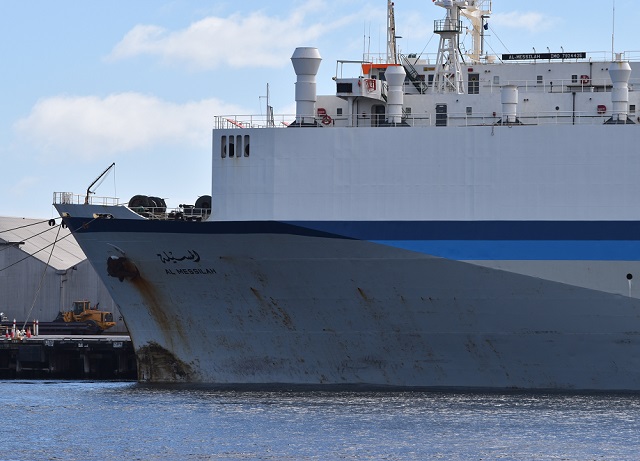