Currently, only Seaway-max size ships (2,500 TEU) can sail between the Port of Montreal and the Port of Toronto on Lake Ontario, the biggest container port on the Great Lakes. However, research is underway in the U.S. and elsewhere that offers the promise of oceanic tug-barge combinations that could be suited to this shipping route.

The Seaway-max ship is the maximum size of ship that can sail along the St. Lawrence Seaway between North America’s Upper Great Lakes and the Atlantic Ocean. While larger ships do sail on the Upper Great Lakes as well as downstream of the Port of Montreal, a variety of economic and environmental factors prevent deepening the navigation passage between Montreal and Lake Ontario. The present expansion of terminals at the Port of Montreal will berth larger container ships of up to 12,000 TEU, up from 8,000 TEU, and enhance container transportation economics to/from major European ports.

A ship designed to carry 8,000 to 12,000 TEU could likely be modified with a larger engine and propeller to tow a Seaway-max barge carrying up to 2,500 TEU. During the Seaway shipping season, it could tow the barge across the North Atlantic from a European or British container trans-shipment port to the mouth of the St. Lawrence River, from where a tug could push the barge along the St. Lawrence Seaway to Toronto. 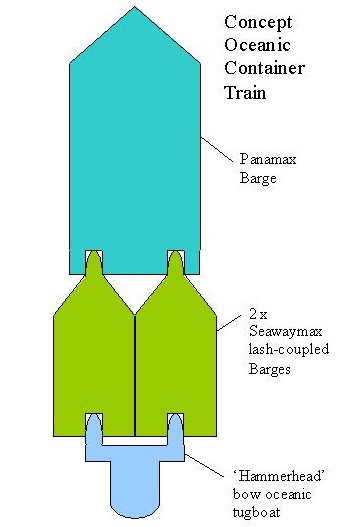 One concept being examined by three different maritime research groups involves a tug pushing and navigating a train of two barges coupled lengthwise, with U-shaped indentations at each stern. There may be scope for a tug to tow such a coupled train, offering the possibility of a container ship of 8,000 to 12,000 TEU towing a lengthwise-coupled train of two Seaway-max barges across the North Atlantic. Upon arrival at the mouth of the St. Lawrence River, a tug would push the coupled train carrying over 5,000 TEU to Toronto. There has previously been discussion about lengthening lock basins at Seaway navigation locks accordingly.

Alternatively, there may be scope to modify earlier Panamax size ships of 8,000 TEU into barges. Extended length oceanic tugs, with engines of 30,000kW and built with a twin-hull hammerhead bows that match twin U-shaped indentations at the stern, could push the large barges across the North Atlantic. The twin U-shaped indentations would increase mechanical strength between the tug and barge during navigation.

A variation of the concept based on recent research could place two Seaway-max size ship-to-barge conversions coupled side-to-side, between the Panamax barge and the tug on the trans-North Atlantic voyage. Upon arrival at the mouth of the St. Lawrence River, the assembly would be uncoupled and the tug would push the Panamax barge to Montreal, while the Seaway-max barges would be coupled lengthwise that a tug would push and navigate to Toronto.

On arrival at a European port, the ocean train would be uncoupled and berthed to take on containers. Modern cranes at European ports would be able to extend across the width of two Seaway-max barges coupled side-by-side.