At their best, Arctic shipping routes connect the world’s largest economies in the Atlantic and Pacific via more profitable, shorter, faster and thus more environmentally friendly trade routes than conventional shipping lanes. Arctic shipping can cut distance between Shanghai and Europe by up to 40 percent, and in this decade vessels transiting through the Northern Sea Route (NSR), by the shores of Russia, have gone from four in 2010, peaking at 71 in 2013 and down to 31 in 2014.

Heavy ice conditions, skeptical insurance companies and a sluggish global economy are the most common explanations given for last year’s slump. What is apparent is that shipping companies and other stakeholders will have to show more commitment for any significant developments to take place in Arctic shipping, and Asia can play a key role.

There is no established transcontinental container network through the Arctic Ocean. In 2013, China’s largest shipping company, COSCO, became the first to pilot a container-transporting vessel through NSR when its multipurpose vessel M/V Yong Sheng carried 16,740 tons of general cargo (steel and heavy equipment) from Dalian to Rotterdam. China has shown an increasing interest in Arctic shipping as it could prove transformative for the world’s most important trade routes between Asia and North America and Asia and Northern Europe, which account for around 60 percent of transcontinental TEU cargo volumes in 2013.

Iceland and China have developed firm bilateral cooperation on Arctic issues under the Framework Agreement on Arctic Cooperation signed by the two governments in April 2012 during an official visit by the former Premier of China, Wen Jiabao, to Iceland. A memorandum of understanding in the field of marine and polar science and technology signed on the same occasion led to China’s sole icebreaker, R/V Xuelong (aka Snow Dragon), visiting Iceland in August 2012 at the invitation of the President and Government of Iceland.

This was Xuelong’s first official visit to an Arctic state and the first time a Chinese-flagged vessel crossed the Arctic Ocean, first via the NSR and returning via the Central Arctic Route (CAR). Xuelong’s fifth Chinese National Arctic Research Expedition showcased the CAR’s future viability as the shortest shipping route between East Asia and North Europe. 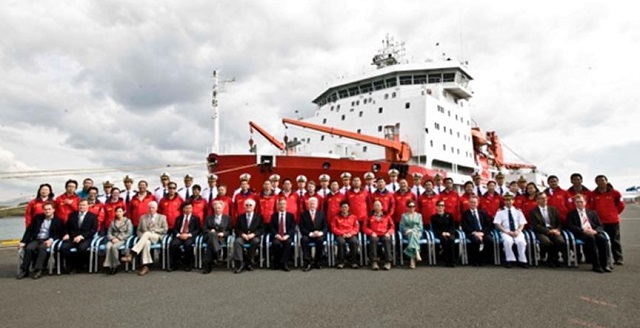 In September 2012, Captain Wei Jiafu, then Chairman of COSCO, visited Iceland with a delegation to analyze the potential of Arctic shipping, and in October 2013 Li Yunpeng, President of COSCO, presented the company’s Arctic vision at the inaugural Arctic Circle Assembly in Reykjavik. In January 2014, COSCO and Eimskip (an Icelandic transportation company) reached an agreement on future cooperation relating to potential Arctic sailings; however a cooperation agreement signed in parallel on transportation in the North Atlantic and international reefer forwarding carries more weight for now.

In July 2014, Iceland became the first European country to ratify a Free Trade Agreement with China and in 2013 People's Bank of China and Central Bank of Iceland renewed a bilateral currency swap agreement, worth $570 million with a three-year maturity, which further promotes bilateral trade and direct investment.

Iceland as a Northern entry

Iceland’s central Atlantic location in the northern hemisphere makes it an ideal northern entry to Europe from East Asia. In a similar fashion as the Port of Piraeus in Greece has become, and thrived as, it could be COSCO’s southern gateway to Europe. Since COSCO’s first involvement at the end of 2008, the port has become Mediterranean’s third largest in terms of container traffic, handling a total of almost 3.7 million containers in 2014 up from 450,000 TEU in 2009. The total worth of COSCO’s investments will soon reach €500 million ($530 million) and the port should, in a few years’ time, handle up to 6.2 million TEU per year, which would make it one of Europe’s five largest ports.

It is highly unlikely that there would be one single Atlantic Arctic transshipment port servicing everything. A case in point can be found in how ports have developed in both Asia and Europe, where there is not a sole service hub in each continent. In 2013, nine of the world’s 10 busiest ports were in Asia, with multiple hubs growing rapidly and sometimes in close proximity to each other, while Europe’s leading ports in Hamburg, Rotterdam and Antwerp (almost in each other’s backyard) furthermore underpin the probability of there being several Arctic ports in future.

Iceland could be developed over time as a transshipment hub in the Atlantic Arctic, expanding infrastructure according to needs as the international shipping network expands through the NSR, then the North West Passage (NWP) and finally the CAR. Iceland is not the prime Atlantic destination for the NSR, where Murmansk, Kirkenes or perhaps Rotterdam could make more feasible transshipment hubs, or for the NWP, where St. John's, Maine or Nuuk are likelier candidates. However, Iceland’s ice-free ports would be the best destination for the CAR and could link NSR cargoes bound for Europe and North America as well as NWP cargoes bound for Europe. 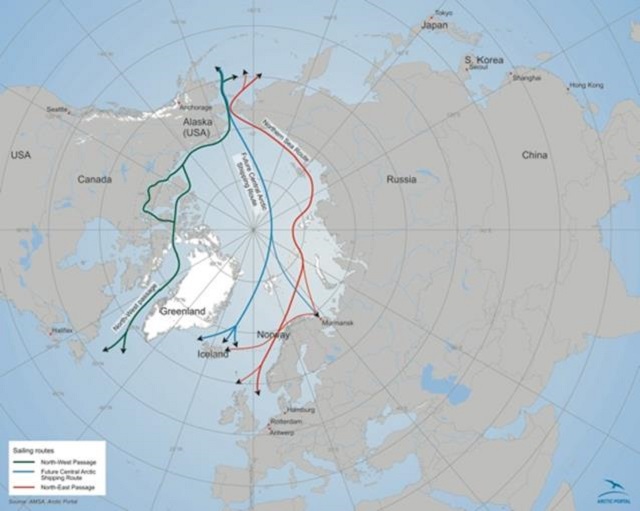 Transportation is the foundation of international business, and it would be of great benefit if shipping, the most economical form of transport, would once more find a way to reduce the costs of moving goods between continents. This has been the case in the past, for example, following technological advances from the industrial revolution starting in the 18th century, with the building of the Suez Canal in the 19th century and the invention of the container in the 1950s.

However, the international shipping network is very rigid. As with many other networks, it is difficult to disrupt, and the question is rather how to link efficiently into it rather than to try to build a competing one. Traffic in the Arctic will grow on its own, but it will also provide new links to the existing transcontinental network.

Transcontinental shipping through the Arctic Ocean has started on a very small scale, but judging by current indicators it may still be a few decades before it will be commercially viable. Many uncertainties of a legal, environmental, economic, social, political and technological nature remain regarding the future feasibility of Arctic shipping. Further infrastructure development in the area is needed, not only for intercontinental transits but also to meet the needs of increased coastal traffic. However, the current situation is not set in stone, and with coherent international initiatives Arctic shipping can become a lucrative business quickly.

Asian shipping companies are likeliest to be the catalysts for change. It makes sense for them to expand their networks to new hubs in North America and Europe, the Port of Piraeus being a case in point. But the question remains, who is willing to allocate the necessary time and resources needed in order to reap the benefits of connecting the Arctic shipping routes to the international shipping network? - MarEx

Heidar Gudjonsson is Chairman of Eykon Energy and Vodafone Iceland. Egill Thor Nielsson is Executive Secretary of the China-Nordic Arctic Research Center and Visiting Scholar at the Polar Research Institute of China.

Note: The original title of the article by the authors is: "Can Arctic shipping break into the international shipping network: The case of China-Iceland cooperation".