The Suez Canal Puzzle – Pulling the Pieces Together

On March 23, 2021, the container ship Ever Given went off course and blocked the Suez Canal for six days. Various estimates of losses ranging into the dozens of billions of dollars have been floated into the market. Those numbers are likely inflated compared to the real damage. What is objective fact is that more than 350 vessels got stuck in the canal and that had real implications. But not all cargo is the same – some is more time sensitive than other. Data can tell us what cargo is affected by a disruption. But more importantly, data can help us to deal with the ripple effects of incidents to avoid an aggregation of waiting time at the canal and the destination ports. We therefore need to secure that enough data are shared providing everyone situational awareness and enabling informed and intelligent decisions. In this article we elaborate on queue numbers and how such information may support deriving enhanced predictability for reduced waiting time in destination ports in Europe, in Asia and at the East Coast of the United States. Incidents such as the blocking of the Suez Canal should provide us with the necessary incentives to share data and act collaboratively upon the situational awareness.

The pieces of the puzzle

It all starts with the choices made by the shipping company

The transport ecosystem encompasses autonomous actors having pieces of a puzzle of common situational awareness that is key for everybody’s coordination of their operations. The incident in the Suez Canal reminds us how much an immobilized piece of this puzzle can affect the global supply chain. Therefore, we need to base ourselves on the actual ship movements to assess progress, make plans and address disruptions.

The captain may not be operating the ship in isolation. The shipping company is mainly concerned with securing that ships are moved cost-efficiently and timely over the oceans with high fulfillment of the ship’s carrying capacity. Some argue that the growing sizes of container ships has made it difficult and risky to maneuver in narrow passages. For sure, the impact of something going wrong is growing with ship size (see figure 1 and 2).

Figure 1: Snapshot of the congestion at 1200 UTC 23rd to 29th of March north of the Suez due to the blockage

Figure 2: Snapshot of the congestion at 1200 UTC 23rd to 29th of March south of the Suez due to the blockage

We have observed that shipping companies, following the Ever Given incident, decided to re-route around Africa. This is estimated to add another 300 000 USD to the cost of fuel expanding the distance around 3 000 nm or 5 400 km for the route between Singapore and Rotterdam. If vessels speed up, fuel cost and CO2 emissions will rise rapidly. We even noticed vessels making a U-turn on the Mediterranean Sea. Such diversion delays arrivals and consumes more resources. But at least they would predict a better arrival time. This makes such incidents and subsequent decisions a trade-off between capital productivity and energy efficiency for the shipping company. 1

Ports need to complement their physical offer with digital services

When shipping companies share data on plans, progress, and possible disruptions, ports can optimize their use of the infrastructure and resources that are shared among clients. Despite promising initiatives for optimizing the ships’ arrival times to the port, the port is just a small piece of the whole transport chain. Whether such initiatives suffice to secure the optimization of the fleet and port infrastructure remains an unresolved question. 2

The Suez Canal incident is an opportunity for ports to show their potential as information hubs.3 They can assume an important role by helping to establish a new level of visibility and collaboration along the chain and among ports. Some experts expect a rush to destination ports because of limited discharging equipment. Reducing potential waiting times in the ports requires organizing the arrivals of ships, through pro-actively arranging for some vessels to slow down to avoid congestion, which at the same time conserves fuel. This also allows for better planning the handling equipment in the port and capacity in the hinterland. This requires a higher level of situational awareness through data sharing.

The debates on optimizing port operations should be expanded to how the lack of data sharing and collaboration impacts the multimodal transport coordinator and the cargo owner and at the end, the ones that buy the cargo, the end-consumer.

Beneficial cargo owners can benefit from end-to-end visibility to take risk mitigating actions. Importing companies need to manage their supply chains and their inventories in such a way that can satisfy the time requirements for the end-consumers. They know that disruption can occur at any time and work with the reality of months-long timescales of ocean shipping. While time sensitive cargo is shipped by airfreight or supplied out of well provisioned nearby distribution centers.

Reengineering practices and securing shared data are prerequisites to optimize maritime flows. A holistic approach, such as the one that is addressed within Maritime Informatics5 would bring more value to buffer zones and better predictability.

Driven by the Suez Canal blockage, there is a line of ships that passes through the canal based on its arrival time. About 350 ships have been queuing, waiting for the green light for the passage (figure 3). Under normal conditions the canal manages 55 southbound and northbound passages on a daily basis which in due time decreases the number of ships waiting in line. 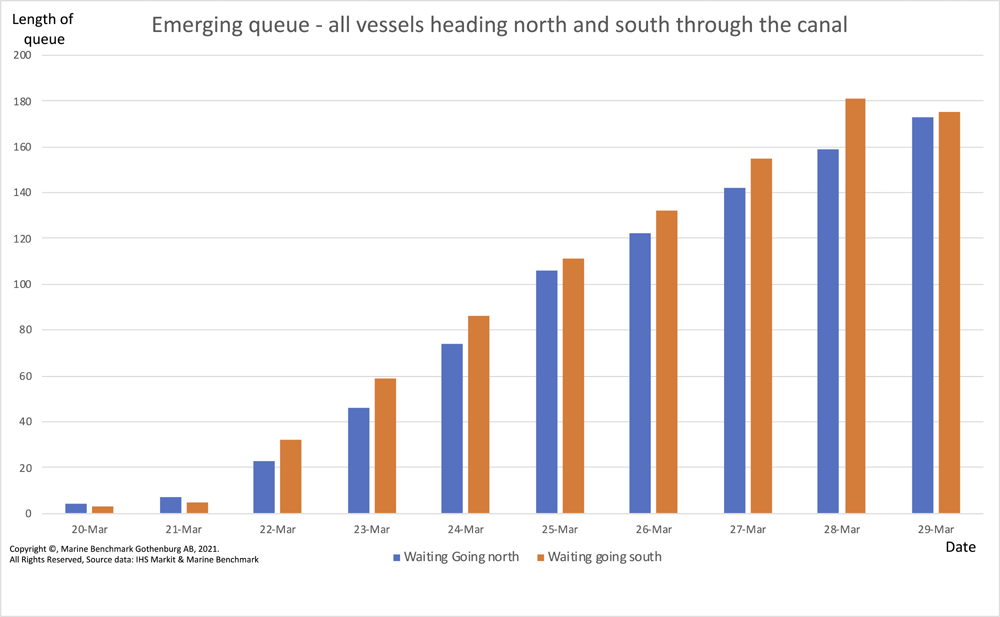 Figure 3: Emerging queue due to the Suez blockage for all vessels heading north and south

Based on the first come first principle it is reasonable to assume that each ship receives a queue number based on when it arrived at the entry point. That would guide our understanding of when a specific ship passes through the canal. A question that remains is whether some ships should be prioritized over other ships, dependent on the type of goods they carry. A marketplace for queue numbers may also be an option to optimize the flow of ships, which may also be a tool to help to reduce port congestion.

The order in line is dependent on how many other ships are waiting to pass. Each of the post blockage 49 southbound heading container vessels stuck in the Mediterranean, and each of the 40 container vessels that were blocked in the Gulf of Suez and that are heading north would have a queue number. The aggregate is reflecting all ships that are aimed to pass through the canal (figure 4). The place in the queue gives the single operator a foundation for predicting when a specific ship passes the canal, providing grounds for forecasting when it is to arrive at the next port. 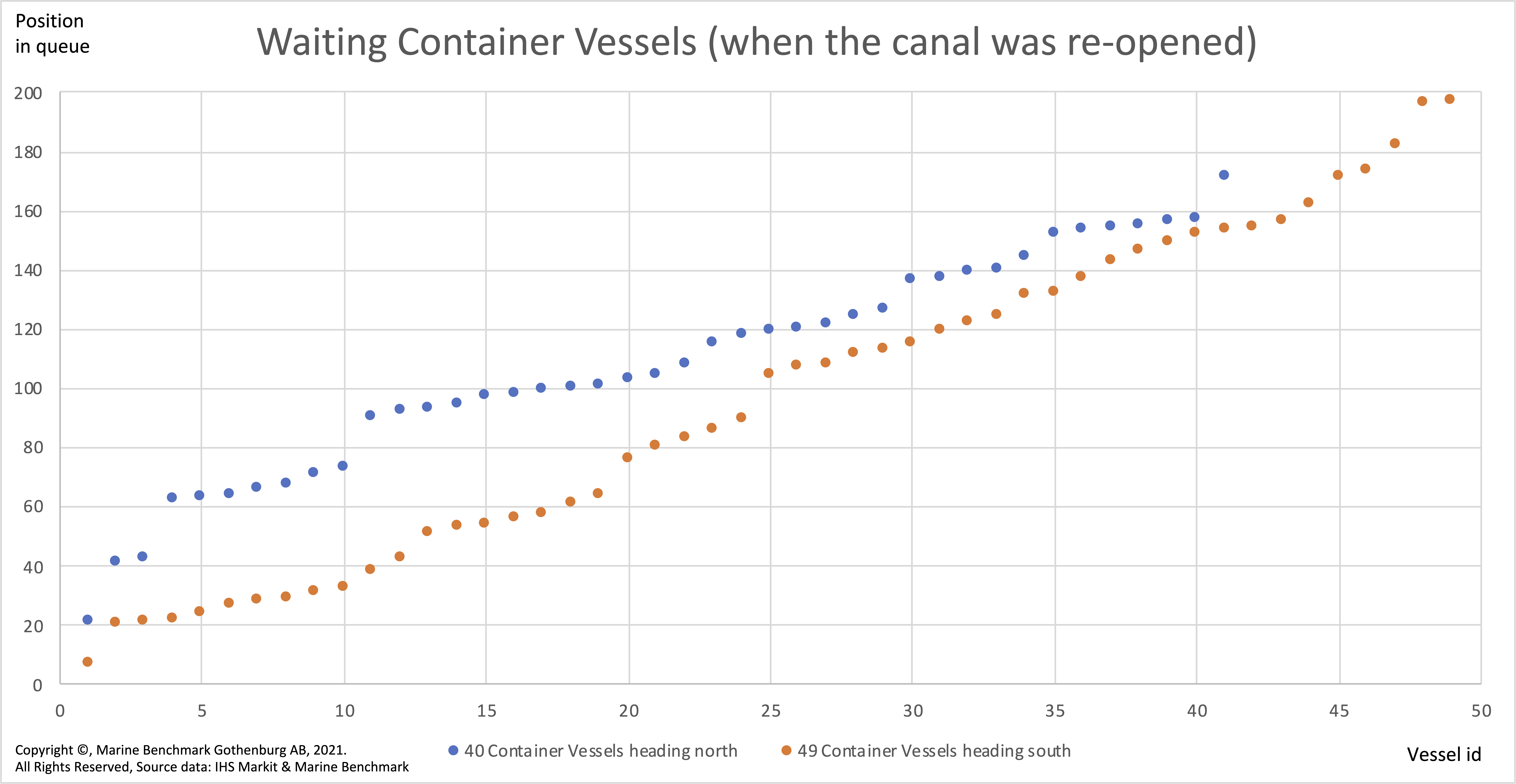 Figure 4: Position in the queue for waiting container vessels heading south and northbound

By using the real throughput time for the canal combined with data on queue replenishment this would also mean that we would be able to approximately predict which ship would be passing through the canal at what time. This is of substantial value for the actors that would like to predict when the goods will appear at the port and point of destination and consequently being able to plan for the use of buffers and possibly accelerated handling at the port and hinterland transportation or even emergency supply through, for example airfreight transport.

This analysis also provides us with the capability to follow whether any ships are deviating from the queue system. 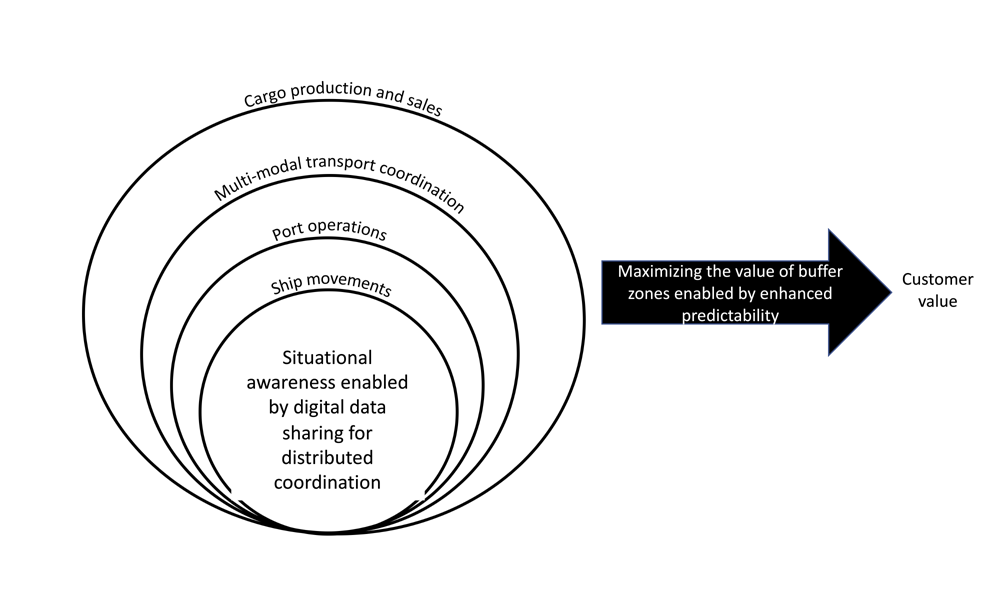 Global supply chains will remain vulnerable, exposed to disrupting events. We cannot avoid situations like the Suez Canal blockage. But we can improve our ability to manage their consequences. Situational awareness spanning from the factories to end-consumer can help extracting more value from buffer zones. Depending on the risk level and the risk appetite there will always be an optimum for the size of the buffer zone, and small buffers may not always be the optimal solution given the inherent risks in supply chain networks. Situational awareness helps also to increase customer and consumer satisfaction by a higher level of visibility and predictability, while laying the ground for optimizing the chain end-to-end. This requires incentives to share data along the chain, standardized data protocols and the willingness to collaborate as the basis for better alignment, decision-making and integration across different modes.

This is a call to review incentives for data sharing along the global supply chain to achieve higher levels of capital productivity and to better prepare for incidents like the Suez Canal blockage. Only data allows us to pull the puzzle together to manage such situations. This article is even more a call for port collaboration than for data sharing. Data sharing will come over time, but collaboration is needed now. The level of data sharing and collaboration required to smoothen the ripple effects resulting from the canal incident, reflects the cultural change that needs to occur as well. If we arrive at predicting when a ship is passing the Suez Canal and arrives at the destination port, we can probably also adapt the same standards, tools and practices to predict congestion at any chokepoint at any port in the world. Which would be a major step towards avoiding or at least significantly reducing waiting time in the maritime industry of tomorrow.

Mikael Lind is the world’s first Professor of Maritime Informatics and is engaged at Chalmers, Sweden, and is also Senior Strategic Research Advisor at Research Institutes of Sweden (RISE). He serves as an expert for World Economic Forum, Europe’s Digital Transport Logistic Forum (DTLF), and UN/CEFACT. He is the co-editor of the first book of maritime informatics recently published by Springer.

Wolfgang Lehmacher is operating partner at Anchor Group. He is chairman of the board of directors of Logen, member of the board of directors of Roambee, strategist Thematiks Supply Chain Innovation Network, advisory board member of The Logistics and Supply Chain Management Society, ambassador of The European Freight and Logistics Leaders' Forum, and founding member of the think tanks Logistikweisen and NEXST.

Lars Jensen is a leading analyst in the container shipping sector, having worked spent 20 years in the field predicting short and long-term trends, initially as Chief Analyst for Maersk and the past decade as an independent advisor and consultant in SeaIntelligence Consulting.

Torbjörn Rydbergh is founder and Managing Director of Marine Benchmark, and has a M.Sc in Naval Architecture from Chalmers and has been in the shipping and car industry for the last 25 years. He has worked for IHS Markit, Lloyd’s Register, and Volvo Cars among others.

Dr. Hanane Becha, Senior Innovation and Standards Advisor, is the UN/CEFACT Vice Chair, Transport & Logistics and the Lead of the UN/CEFACT Cross Industry Supply Chain Track and Trace Project. She initiated and led the first Global Smart Container standards at the UN/CEFACT, and she is actively involved in many standards organisations including DCSA, SMDG, and IATA.

Luisa Rodriguez is Economic Affairs Officer at UNCTAD. She is a member of the team drafting UNCTAD’s annual review of maritime transport Within this team, her area of focus is mapping and analysing trends related to the supply of maritime transport services and infrastructure. She is also the editor of the UNCTAD Transport and Trade Facilitation Newsletter.