The Golden Thirteen: How Black Men Won the Right to Wear Navy Gold 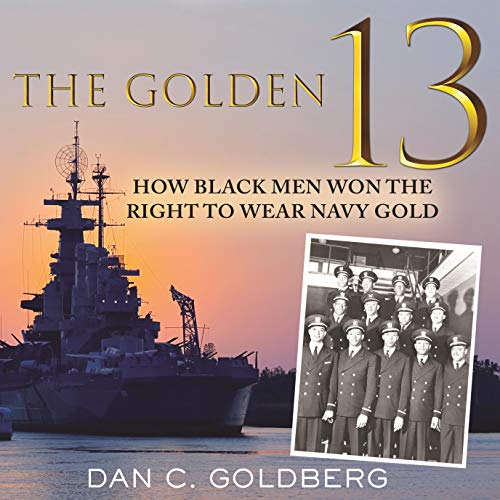 This Memorial Day will be particularly poignant given the year’s ongoing events and remembrances marking the 75th anniversary of the end of World War II. As Americans honor those who fought for freedom and democracy in Europe and the Pacific, they would do well to also commemorate the bravery of the thirteen African American men who integrated the U.S. Navy’s officer corps during the war.

Politico reporter Dan Goldberg spent eight years researching the story of these forgotten heroes, intent on bringing them the attention they deserve. In The Golden Thirteen: How Black Men Won the Right to Wear Navy Gold he draws on that research, as well as interviews with the men’s family members, to create a detailed picture of their lives and the opposition they faced, from the pseudoscience that propped up racist policies to the everyday degradation and brutality of America’s Jim Crow era.

At the beginning of World War II, writes Goldberg, black men in the Navy were only permitted to hold jobs as cleaners and cooks—and Navy Secretary Frank Knox was determined to keep it that way, insisting that whites would not tolerate mixing equally with black men, especially given the close living dsquarters aboard Navy ships. The Navy was, in part, following military policy that was set by a 1925 Army War College report that asserted that black men, based on their alleged performance in World War I, could hold no position that required leadership, courage, or intelligence. "In the process of evolution,” wrote one of the report's authors, Major General Hanson Edward Ely, “the American Negro has not progressed as far as other subspecies of the human family."

In January 1944, when sixteen black men arrived for the officer training program at the Naval Training Station in Great Lakes, Illinois, it was the culmination of a four-year campaign by ordinary citizens and the black press, who called for black men in the Navy to be treated according to the democratic ideals that the U.S. was preaching and defending across the globe. Goldberg takes readers inside those efforts, led particularly by Robert Lee Vann, the powerful publisher of the Pittsburgh Courier, the most influential black newspaper in the country. Among other initiatives, the Courier, quickly followed by the other major black papers, launched the "Double V" campaign, which called for winning the fight for democracy abroad, as well as at home. Hollywood celebrities lent their support, recounts Goldberg, and prominent black Americans, including Marian Anderson and Roy Wilkins, were photographed flashing the Double V sign.

The backlash was inevitable.

“While many black men wondered whether the war was worth fighting if nothing changed at home,’ explains Goldberg, “many southern whites wondered whether the war was worth winning if anything changed at home.” Underscoring the degree to which President Roosevelt was caught between black demands and the southern voting bloc, Goldberg recounts how FDR and other major figures of the time, from the NAACP’s Walter White to First Lady Eleanor Roosevelt, slowly pressed desegregation on the Navy’s General Board—which insisted that too much integration would dampen morale among whites and damage battle efficiency.

Finally yielding to the relentless pressure, the Navy informed sixteen enlistees that they would be the first to integrate the office corps. The officer candidates, ranging in age from 23 to 36 years old, were not military men; they were metalsmiths, teachers, lawyers, and college students. All had experienced race-based terror and humiliation; one of them, James Hair, had seen his brother-in-law lynched. Together they set their sights on giving meaning to those who had fought for this moment and for the opportunities of black Americans everywhere.

Taking readers inside the sparsely appointed Great Lakes barrack where the men lived and studied, segregated from whites and other black enlistees, Goldberg details their determination to triumph in their exams, studying seamanship, navigation, gunnery, naval regulation and law well into the night. “We decided that this was an experiment which could not fail because it meant too much to too many people,” remembered enlistee George Cooper. “We would either excel as a group or fail as a group.” In March of 1944, even after disbelief in Washington forced them to take some exams a second time, the men posted the highest average of any class in Navy history.

Although all sixteen had succeeded in the classroom, the Navy decided, offering no explanation, that only twelve men would be commissioned, and a thirteenth would be made a warrant officer. The decision meant, notes Goldberg, “that the first black class, a group that posted the highest marks ever, would have the same pass rate as a class of average white office candidates.”

That indignity would be followed by many others, from the Navy doing nothing to promote the men’s achievements and denying them housing, as well as access the officers’ club, to the white sailors who crossed the street to avoid having to salute a black man. By the 1970s, writes Goldberg, a decade after the rise of the civil rights movement, the Navy began drawing the officers together for reunions, promoting them as symbols of racial progress. During the first of these reunions, the legacy of the Golden Thirteen became clear to the men as younger black Navy officers came over to pay their respects. “We owe it all to you,” Goldberg reports one after the other saying. “If it hadn’t been for you guys, we wouldn’t be here."

Pamela MacColl is the director of communications at Beacon Press, the publisher of The Golden Thirteen.