The Concept of the Floating Shipyard

Shipyards are known as a land-based facility that ships steer to for docking and repair. This study represents a basic conceptual study for a new principal of developing a floating shipyard - changing the phenomena of a fixed site shipyard into a self-propelled mobile platform.

This floating shipyard is capable of traveling and conducting drydock activities at the client's location, or even can lift the client's vessel and travel to its next designated location, taking advantage of completing the dry dock and repair during the voyage.

The challenges to this floating shipyard, such as lay-offs, restructuring, and environmental legislation, requires a balanced solution. This solution relies on the adaptation of talent management and competitive production tools. The floating shipyard, here named "F-Yard,” changes the mindset of dry-dock. This is because F-Yard travels to the client's location or can carry the client's ship towards the cargo destination, where it can complete the required drydock or repair. It targets customers that lack a qualified shipyard in their working area/route, or customers who find that their shipyard is not matching their needs for quality, safety, time frame.

The cutthroat advantage of the F-Yard comes from having its own propulsion, where the other approaches depend on others for mobilizing and anchoring. F-Yard could also serve other industries with its fully equipped workshops, such as oil and gas and renewable energy.

The modular workshops on the F-Yard would be based on ISO containers, each with a fully equipped shop for the different trades. This principal gives F-Yard the ability to have different arrangements/layouts based on upcoming drydock requirements and optimizing the limited space of the yard.

The general design outcome is about 240 meters in length by 40 meters in breadth to be able to accommodate an offshore unit (alongside) and to dock a drillship. Also, it will be capable of serving a ship inside the dock of up to 60,000 DWT, plus other two units (ships/offshore vessels) alongside at the same time.

The floating shipyard idea presents a self-propelled heavy lift ship that has the capability to perform all the docking activities of routine or emergency docking, in a stationary location or while in transit from one location to another.

Beyond ship repair, the main revenue is expected to come from offshore units like jack ups and drill ships. Serving these high-value assets in place saves a huge amount of time and money to and from the nearest shipyard with a limited speed. The total cost of hiring this floating shipyard could be much less comparing to land-based drydock.

Finally, F-Yard could also be chartered to another shipyard during periods of peak market demand to provide extra capacity.

A detailed study has been done as a first stage to determine the feasibility of the project and its profitability. Further study and partnership would be required for implementation. 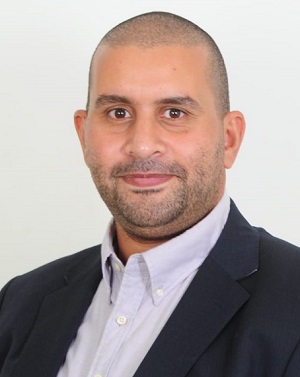 Ahmed Samir Ghowel is a senior project manager and researcher. He has worked in dry-docks, conversion and repair projects for almost thirteen years in different shipyards. He received his BSc from Alexandria University in naval architecture and marine engineering. Thereafter, he received his MSc from Liverpool University in construction project management. He has been registered as an Incorporated Engineer by Engineering Council-UK. He may be reached at aghowel@gmail.com,