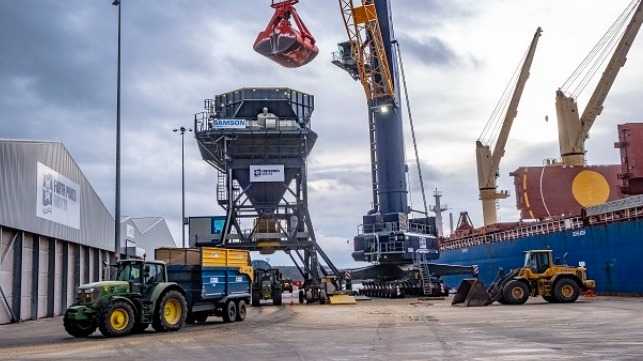 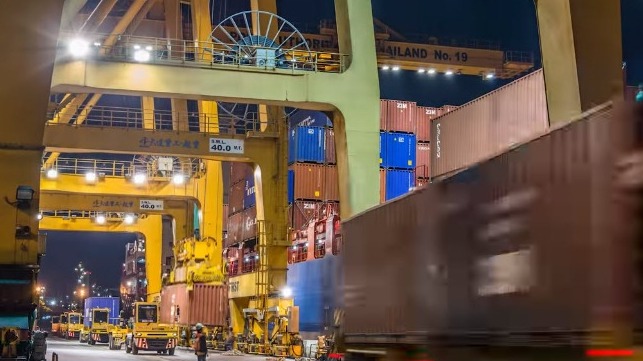 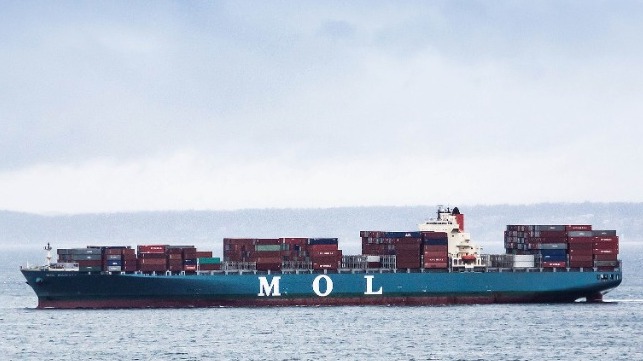 Boxship Held Over Suspected Cocaine Smuggling at Port of Ensenada

Last Friday, Russian President Vladimir Putin descended on the frigid Yamal Peninsula to participate in the opening ceremony for a major Arctic liquefied natural gas (LNG) project at the booming port town of Sabetta. Just a few years ago, hardly anybody lived at this remote outpost on the peninsula, a thumb of land sticking out from Siberia criss-crossed by reindeer herders and pipelines. Now, 30,000 employees, mostly shift workers imported from southern and central Russia, have helped to construct the biggest LNG project north of the Arctic Circle.

At Putin’s command, gas began pumping into an LNG carrier sitting offshore. While his push of a button sought to symbolize his clear and effortless control over Yamal, the Russian Arctic, and the country at large, the network of actors involved in making the project a success runs far and wide. Even the icebreaking LNG carrier, Christophe de Margerie, was built in Korea. The vessel draws its name from the late CEO of France’s Total, one of the world’s largest oil and gas companies and a key investor in the long-awaited $27 billion Arctic gas project, despite US and EU sanctions on Russia’s energy sector. Yamal LNG has a production capacity of 16.5 million tons per year and a total of 208 production wells are slated.

In Sabetta, Putin gave a speech in which he declared about LNG, “This is an extremely important sector for Russia. This is not just an important event in our country’s energy sector, or gas production and liquefaction. This is a more ambitious project. What I mean is that we are faced with the enormous task of developing the Arctic and the Northern Sea Route.”

This past June, during the annual “Direct Line with Putin” broadcast that gives Russian citizens a chance to speak with the president by phone, a woman by the name of Tatyana Remezova asked, “Why are we so focused on the Arctic? For the past 20 years, no one spoke about it, and today we see Arctic troops even at the Victory Day parade. A lot of money is spent on the Arctic. Why is this being done?”

Putin responded curtly, “While we are on this subject, what else can I say? I have already started talking about this. The Arctic is an extremely important region, which will ensure the future of our country. Mikhail Lomonosov once famously said that Russia would expand through Siberia. I can say with confidence that Russia’s power and capabilities will expand as we develop the Arctic region.”

Yamal LNG is thus intended to jump start development of the Northern Sea Route. Despite Putin’s Russia-centric frame of reference, however, Yamal LNG would likely not have been a success without crucial French and, notably, Chinese assistance.

U.S. and European Union sanctions on Russia have made it difficult for energy projects to get the capital they need from the West. Companies like Novatek, the independent company operating Yamal LNG, have instead looked to China, which sees in Russia opportunities for geopolitical and economic gains.

Gas-strapped and cash-rich, China has poured money into resource projects and companies in far-flung locations. Yamal LNG was one of the first three projects financed by the Silk Road Fund. Beijing established this state-owned investment fund to support its ambitious aims with the Belt and Road Initiative, a $1 trillion plan to build infrastructure across Eurasia. The Silk Road Fund loaned Yamal LNG $1 billion in exchange for a nearly 10 percent stake. Chinese banks loaned Yamal an additional $12 billion, the third biggest corporate deal of its kind in Russian history, according to Reuters. In turn, China National Petroleum Company received a 20 percent stake in the project.

China therefore sees the Yamal LNG project as much a project of its own making as Russia’s. A story from Taiwan’s official outlet, Central News Agency, opened with these two noteworthy sentences: “The Yamal LNG project, jointly developed by China and Russia in the Arctic Circle, has been put into operation recently. Completion of this development in 2019 is expected to help make up for the LNG shortage in China and open up the Arctic waterway for China.” On the mainland, state-run outlet Zhejiang Press Office declared, “Throughout the project’s construction process, China’s advanced engineering capabilities showed most vividly,” while also adding, “the creative work of China’s construction team and builders is remarkable.” The article noted how of the four polar drilling rigs in one of the condensate fields, one was produced in China.

In Sabetta, Putin asserted that success in Yamal “means further development of nuclear shipbuilding.” He also recently gave responsibility for development of the Northern Sea Route to Rosatom, the Russian nuclear regulator, a move that would be somewhat akin to having the U.S. Nuclear Regulatory Commission oversee development of the Alaskan coastline. Finally, and perhaps most worrisomely for China, Putin recently outlined his desire to nationalize oil and gas shipping along the Northern Sea Route, for which the State Duma is currently considering a draft Law. That would mean even Christophe de Margerie would be ineligible to load LNG at Yamal, as it is a Cyprus- and not Russia-flagged ship.

For the moment, Chinese media seems to be ignoring Russia’s nationalist dreams of transforming the Northern Sea Route. Instead, state-run outlets like Xinhua are trying to bring the Russian Arctic into China’s sphere of maritime influence. Rather than referring to the Northern Sea Route as such, Xinhua said, “this passage through the Arctic Circle is called the ‘Silk Road on Ice.'” When not using this new moniker that points to China’s plans to revive the ancient Silk Road, Chinese officials call the shipping lane the “North-East Passage” rather than the Northern Sea Route, a term which emerged under Soviet rule following the government’s closure of the lane to international shipping.

Further underscoring the Arctic shipping lane’s eastern orientation, Xinhua drew attention to the fact that more than 60 percent of the modules and components for the Yamal project were transported through the Bering Strait – meaning that most of them likely came from Asia. Another Chinese outlet reported that “Chinese enterprises have contracted 85 percent of all modules [and] construction of 7 transport vessels.” (Chinese discourse also never lacks for colorful metaphors, with another Xinhua article referring to Yamal LNG as “an energy pearl inlaid in the Arctic Circle.”)

In return for its money and equipment, Asia will buy up a lot of Yamal LNG’s output. Initial reports stated that Russia would send the first gas from Yamal to China as a symbolic gesture, but it actually appears that the first sale has been made to a UK-based subsidiary of Malaysia’s Petronas. Marine Traffic also shows the vessel sailing not towards Asia, but rather to Denmark’s Port of Skagen. Saudi Arabia, too, will buy gas from Yamal, and the country’s energy minister reportedly spoke with Novatek’s owner about the possibility of investing in an additional nearby LNG project while attending the opening ceremony in Sabetta.

Still, China will be filling its pipes with gas from the Russian Arctic in due time. Once Yamal is fully operating in 2019, 4 million tons of LNG from Yamal are planned to be exported to China each year. The country’s government sees Yamal as its own success story, a view that clashes with the picture painted by Putin. Both Moscow and Beijing are eager to continue cooperation, though. Already, Honghua, a major global supplier of oil and gas rigs, accounts for 60 percent of Russia’s oil drilling equipment imports. Whether Russia’s domestic policies in the Northern Sea Route will be beneficial for China, though, has yet to be seen.

With Yamal’s launch, overnight, Russia has doubled the number of Arctic LNG projects worldwide. Prior to Friday, only Norway’s Snøhvit field off Hammerfest was exporting LNG from north of the Arctic Circle. More gradually, Russia has become a serious exporter of Arctic oil. Bloomberg’s Julian Lee did the math to show that crude exports from Russia’s three Arctic terminals – Varandey, Prirazlomnoye, and Arctic Gate – reached nearly 400,000 barrels a day in November. Yet even as Russia inches closer to becoming the world leader in Arctic oil and gas, it’s worth remembering who is behind this evolution: not just Moscow, but also, among others, Beijing.

This article appears courtesy of Cryopolitics and may be found in its original form here.

Scotland’s largest agricultural products hub is now fully operational at the Port of Rosyth. The milestone was highlighted by the arrival of the Baltic Mantis bulk carrier and her load of over 30,000 tonnes of animal feed from Argentina. As part of a long-term partnership with Forth Ports and Cefetra Ltd, the Fife port now handles an extensive range of agricultural products for the Scottish animal feed, food and drink and farming industries. The Port of Rosyth has been deepened...

Infrastructure Australia has announced its Priority List for 2020 which includes the development of deepwater container port facilities. Australia’s independent infrastructure adviser noted the need for “a network of deep water ports” along the East Coast to accommodate large ships that are currently unable to visit due to port constraints, as a “priority initiative.” Infrastructure Australia is set to examine the issue, including understanding the challenge of channel deepening at existing ports, development of new port locations and enhanced landside...

Boxship Held Over Suspected Cocaine Smuggling at Port of Ensenada

On Tuesday, the Mexican Navy recovered three kilos of cocaine that were allegedly thrown from the deck of the container ship MOL Majesty at the port of Ensenada, Mexico. In a statement, the Mexican Navy's Second Naval Region said that naval personnel spotted a person on the container ship's deck throwing an object into the sea at the port of Ensenada. A "suspicious boat" was nearby. Two naval patrol boats were launched to search the area, and personnel recovered three packages...