Renewed Potential for Container Shipping on the St. Lawrence Seaway

The long-term forecast for increased international trade - combined with logistical issues related to railway and truck transportation - offers the possibility of increased container traffic along the St. Lawrence Seaway. Before the pandemic lockdown, a small container ship feasibly carried containers between the Port of Antwerp and the Port of Cleveland on Lake Erie. That service suggests the future potential for container shipping on the Seaway, despite earlier market failures many years ago.

Beginning long prior to the pandemic lockdown, the steady increase in international container-based trade required the introduction of progressively larger container ships. The early years of container shipping saw the operation of ships of under 1,000 TEU. Continued growth of international container-based trade resulted in the development of progressively larger ships, which eventually reached the maximum allowable vessel dimensions of the original Panama Canal, the early Panamax ships. Container shipping occurred along the St. Lawrence Seaway during the era of small container ships. However, these services eventually faltered, for multiple reasons.

International container-based trade is forecast to increase over the years following the end of the present pandemic period, and ship size continues to grow. Several years ago, North American Pacific Coast ports were modified to berth and service container ships of 18,000 TEU. More recently, several Atlantic Coast ports underwent required upgrades to berth these ultra-large ships. In Eastern Canada, plans are underway to eventually serve much larger container ships at the Port of Quebec City.

Prior to the pandemic lockdown, Canada invested heavily into upgrading the Port of Montreal and expanded the port to process increased numbers of containers. Two railway companies connect to the container terminals at Montreal and operate frequent extended length trains that carry containers to the Greater Toronto Area, Canada’s most populous region. The road network around Montreal has been expanded to divert traffic around the island of Montreal, where traffic congestion has become problematic. Some of the new container terminals are located southeast of Montreal along the St. Lawrence River.

Over many years, road traffic volume in the Greater Toronto Area has steadily increased to the point where slowdowns and delays due to road traffic congestion are frequent. Traffic volumes and related congestion along roadways that connect to the Port of Toronto have reached the point where future ship-to-truck transfer operations may become problematic, leaving intermodal railway-to-truck terminals (“inland ports”) as the default alternative. Increased container-based trade will increase the volume of traffic that passes through the area’s intermodal terminals, which were already approaching peak operational capacity prior to the pandemic lockdown.

There has been growing public opposition to expanding capacity at existing intermodal terminals or building new ones near residential areas in the Greater Toronto Area. Smaller towns located west of Montreal and to the south and southeast of Canada’s Capital of Ottawa have allowed development of small railway-truck intermodal terminals. This development is occurring within close proximity to distribution warehouses and logistics areas intended for additional such warehouses.

The combination of increased future container trade going into the Greater Toronto Area provides an opportunity to explore moving containers along the St. Lawrence Seaway to Canadian ports on Lake Ontario. Road traffic conditions near the Port of Toronto would require the transfer of some intermodal waterway-truck transfer operations be moved to the nearby Port of Hamilton to the west and Port of Oshawa to the east. Both ports would require further development to include ship-to-truck transfer of containers. 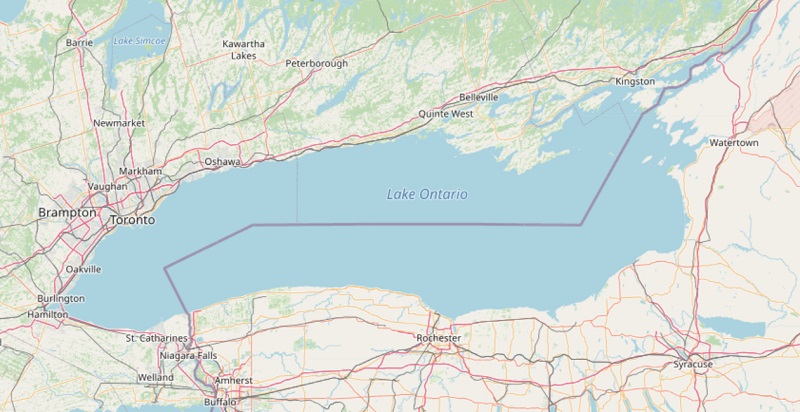 The Port of Hamilton, one of Canada's busiest seaports, is located to the southwest of Toronto, lower left. Oshawa is located to Toronto's northeast (Copyright OpenStreetMap contributors)

The Port of Hamilton is located next to a main highway, allowing extended length trucks to travel between main highway and future container terminal along roads that are far less congested than near Port of Toronto. At Port of Oshawa, trucks would have to travel along city streets between the main highway and the maritime terminal, leaving Hamilton as the default choice for future container traffic going to destinations located west of Toronto. To the east of Oshawa, the privately-owned Port of Picton and Port of Johnstown have both expressed interest in handling containerized freight.

Future development at the Port of Quebec City will allow larger container ships to deliver containers to their expanded terminal. While the port is focused on intermodal railway to carry containers to inland markets, there is also potential to transfer containers to inland vessels that sail to the St. Lawrence Seaway and Great Lakes ports. The annual pre-Christmas seasonal peak for container volume occurs when the St. Lawrence Seaway is still open to navigation, allowing waterway transport to offer customers reduced container shipping rates while greatly reducing the pressure on intermodal rail-to-truck terminals.

The precedent of a small container ship sailing directly between European container ports and the Port of Cleveland provides a basis to develop direct sailing to Port of Hamilton, Ontario. While trans-Atlantic sailing aboard a large ship incurs competitive per container transportation rates, the high cost of railway transportation between Port of Newark and Port of Cleveland enhances the cost-competitiveness of direct trans-Atlantic sailing involving a small container ship. The railway distance between Halifax and Hamilton as well as between Quebec City and Hamilton are both longer than the distance between Newark and Cleveland.

The population of the Greater Toronto area is twice that of Montreal and of Cleveland, suggesting potentially viable seasonal trans-Atlantic container ship sailing between a European container transshipment terminal and Port of Hamilton. Future constraints on intermodal rail-to-truck transfer capacity in the Greater Toronto area further enhances future prospects for a container terminal at Hamilton. However, there may be little enthusiasm amongst Canadian federal transportation bureaucrats for a container terminal at the port.