Twenty years ago this month, on February 8, 1997 the master of the Leros Strength contacted the rescue co-ordination center in Stavanger, Norway, requesting immediate assistance. After approximately three minutes the radio contact was abruptly cut off. It was subsequently determined that the ship had foundered and her crew of 20 was lost.

The Leros Strength was a 20 year old medium sized bulk carrier. She had loaded about 18,000 tons of apatite (a phosphate mineral commonly used in the production of fertilizer) in Murmansk. Sailing with a crew of 20 she was bound for Poland. During the days before her loss, she ran into worsening (but not unexpected) weather - wind speed 35 knots, with four meter wave height. At the time of her loss, off south western Norway, no other ships were reported to be in difficulties due to the weather.

It seems probable that water had ingressed progressively into the forward compartments during the night and that the master first became aware of the gravity of the situation when the daylight broke (sunrise occurred at 07.36 a.m., and the radio conversation started at 07.50 a.m.).

The master noted that the bow was submerged up to number one hold that the ship was difficult to handle and started pumping operations from the forward compartments. It is highly probable that when the master was in contact with the rescue co-ordination center in Stavanger, the vessel's forepeak no.1 and no.2 cargo holds were flooded, with additional flooding progressing.

While reporting this, communication suddenly ceased - presumably a catastrophic event resulted in the rapid sinking of the ship which also eliminated the possibility of any planned abandonment by the crew.

Both the Cypriot (flag state) and Norwegian (coastal state) authorities investigated the sinking of the Leros Strength. If the causes could be established, this could possibly be a basis for proposing new/revised regulations or procedures related to bulk carriers, thereby - in the longer term hopefully contributing to preventing similar casualties in the future.

The investigations included an underwater investigation of the wreck and a review of the class survey records. They were not able to identify with certainty the specific direct cause of this accident.

However, from other available information it is possible to identify the direct cause in general terms, which was clearly "ingress of water into the fore part of the ship". Both the Cypriot and Norwegian reports focused to large extent of the class survey records, and in particular the fourth special survey. Around the time of this survey due date, the ship transferred class to another society.

INTERTANKO (the voice of independent tanker owners) commented on the Norwegian Report with the following:

The report questions once again important classification issues such as surveys and the transfer of class procedures and provides the following recommendations:

•    Survey reporting needs to be significantly improved
•    The principle of “negative reporting only” should be generally banned from survey reporting
•    Standard terminology for reporting should be agreed and made mandatory
•    The possibilities for splitting up a given survey between different survey stations should be restricted
•    Repairs of items relevant for structural integrity should always be planned beforehand in co-operation with the classification society
•    No deferral of repairs previously required by a surveyor should be allowed, unless so decided by the head office
•    Three months extension of the five-year period for continuous trading is not permitted according to the SOLAS Convention, and must be banned in practice
•    Renewed consideration should be given to the length limit for SOLAS Ch. XII (presently 150m) so as to make these requirements applicable also for bulk carriers similar to Leros Strength
•    Consideration should be given to requiring more than one surveyor to carry out Special Survey for ships above a certain age; alternatively requiring supervision of parts of this survey by a surveyor from the Flag State itself
•    No transfer of class should be allowed until the losing society has confirmed that all outstanding recommendations have been rectified
•    When a periodical survey is due, no transfer of class should be allowed until the complete survey has been carried out by the losing society with satisfactory results.

During the 1990's bulk carrier safety was noted by the IMO and International Association of Classification Societies (IACS) as an important safety concern - during the years 1990 - 1997 ninety-nine bulk carriers and over 650 lives were lost.

John Dalziel is a marine consultant and Adjunct Professor in the Department of Industrial Engineering at Dalhousie University, Canada. 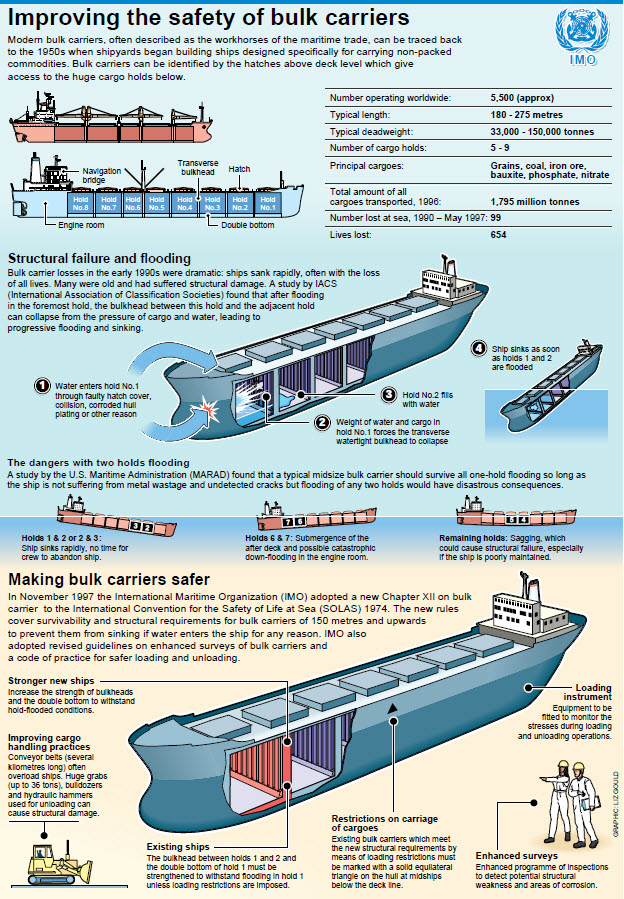