Powering a Low-Carbon Future With Methanol as a Marine Fuel

Panos Koutsourakis, ABS Director of Sustainability Strategy, Singapore, explains why methanol is one of the near-term solutions for decarbonizing shipping.

Methanol as a marine fuel is increasingly becoming a viable contributor in shipping’s drive for a clean, sustainable fuel mix, and is providing the experience necessary for the development of stronger marine fuel standards on the seaward journey to decarbonization.

Methanol as a marine fuel has potential thanks to its simpler handling and lower investment infrastructure costs. Using methanol produced from natural gas offers a proven reduction of NOx and SOx emissions, and by producing methanol from renewable sources, shipping can substantially reduce its GHG emissions.

As with other new fuels entering the market, the concerns of shipowners and other stakeholders are focused on safety, fuel availability and meeting future GHG requirements. One of the main challenges to owners during this fuel transition is to decide on an alternative fuel or fuels to prepare for 2050.

In November 2020, the Maritime Safety Committee of the International Maritime Organization (IMO) adopted interim guidelines on the use of methanol as a marine fuel, making ethyl and methyl alcohols options for shipowners and operators. 12 methanol powered ships are already in operation, with another 10 on order.

Early adoption of any new fuel depends on the demand and the supply landscape. In the case of methanol, even though its trade is well-established globally with more than 70 million tons produced annually, its use across many applications and industry sectors may restrict the actual volume available for the shipping industry unless incentives are introduced. This could mean methanol being produced synthetically, which could incur extra costs.

Methanol has the advantage of a liquid state and the ability to re-purpose existing infrastructure, to include engines and vessels with efficient retrofits. Onboard containment of methanol is easier than LNG, though the liquid fuel has a lower volumetric density than LNG, necessitating comparatively larger containment tanks.

Methanol is just one of the two principal options currently available today to shipowners, with methanol-powered vessels already in service, further ships under construction and many development projects underway.

Either production pathway, blended into conventional methanol in increasing volumes, could considerably reduce the carbon dioxide (CO2) footprint of its use as a marine fuel. This potential to reduce CO2 output – as well as its ability to provide compliance with IMO2020 regulations – means that the use of methanol is drawing wider interest from owners of oceangoing vessels, short sea vessels, ferries, cruise ships and inland waterway vessels.

Methanol is a colorless liquid at ambient temperature and pressure with a characteristic pungent odour. It is easier to store and handle than liquefied natural gas (LNG), ammonia and hydrogen fuels. Its properties are shown in Figure 1 (below). 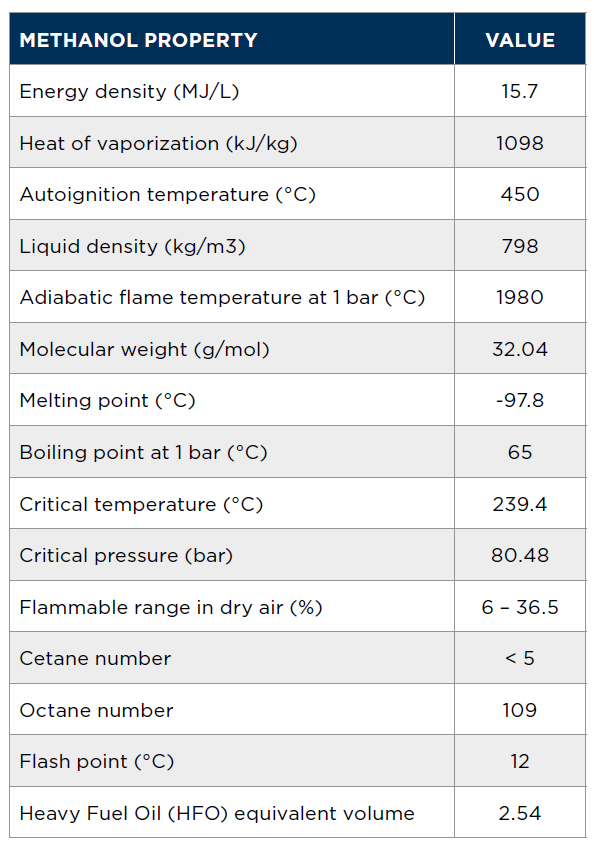 Methanol has the highest hydrogen-to-carbon ratio of any liquid fuel, a relationship that potentially lowers the CO2 emissions from combustion when compared to conventional fuel oils. When used as the primary fuel, methanol can reduce CO2 emissions by around 10 percent. However, methanol has the potential to be a carbon-neutral fuel in the future if it is produced renewably through biomass/biogas or renewable electricity.

Methanol’s specific energy of 19,700 kJ/kg is much lower than that of LNG and conventional liquid fuels. For the same energy content, methanol requires about 2.54 times more storage volume than conventional fuels. When comparing methanol to LNG, an overall decrease in the effective volumetric density of LNG is to be accounted for due to packaging factors for cylindrical tanks, insulation and filling factors, boil-off gas, and custody transfer losses.

If spilled or leaked into the environment, methanol has significantly less impact than conventional hydrocarbon fuels. It dissolves readily in water, and only very high concentrations in the environment create lethal conditions or any changing effect on the local marine life. This means that a methanol spill would result in limited damage to the environment except for the release of carbon into the marine ecosystem. Methanol in the ocean is common, produced naturally by phytoplankton, and is readily consumed by bacteria microbes, thus entering and supporting the food chain.

The general safety principles of the IMO’s IGF and IGC Codes provide the framework for the use of low-flashpoint marine fuels such as methanol. Common safety principles such as fuel tank protective location, double barriers on fuel supply lines, ventilation and gas detection, hazardous area classification, explosion mitigation, etc. are equally applicable to all low-flashpoint fuels. However, the specific fuel characteristics may require specific safety features. For methanol, any fuel leaks produce heavier-than-air vapors requiring additional detectors that are necessary as the fuel is toxic if ingested or inhaled – fuel characteristics which would be considered during the risk assessment analyses.

The fuel itself does not have cryogenic complexity and it is a liquid at ambient conditions, making it simpler to handle and closer in operation to conventional bunker vessels. In addition to methanol being traded and transported in chemical carriers for many years, there is also the experience of the Offshore Support Vessel (OSV) and Platform Supply Vessel (PSV) fleets handling methanol for the offshore industry, which can also be reference points for the wider adoption of methanol as a bunker fuel. Methanol is a widely traded commodity with an existing global distribution network that could be easily leveraged to support marine fuel bunkering.

The adoption of low carbon and net carbon-neutral fuels for large vessels is more challenging than for smaller ones. Using fuels with low energy content, such as methanol, would require a significant redesign, not least because their fuel tanks would need to be expanded to store enough energy for longer deep-sea travel. 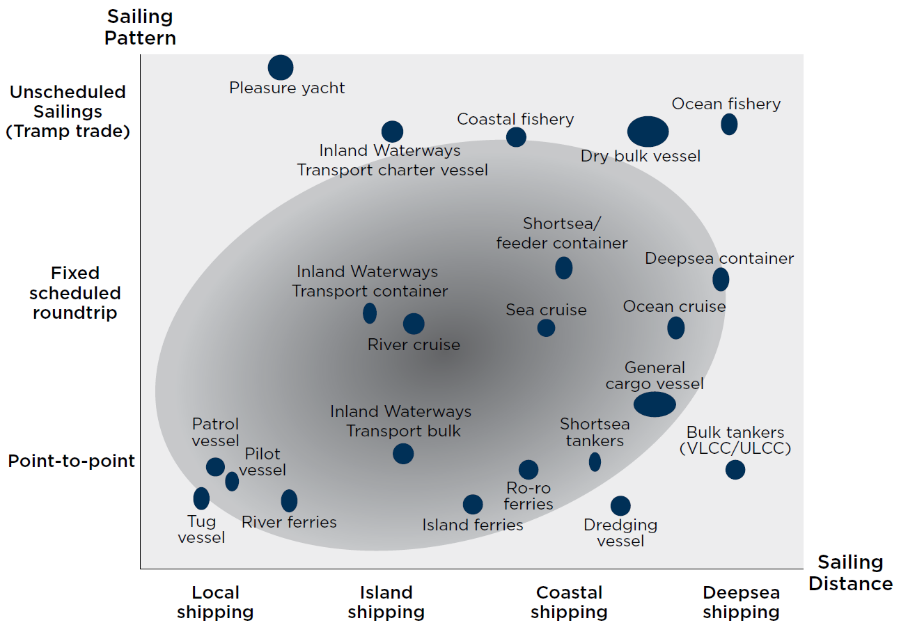 However, methanol is more suited to storage in near-conventional fuel tanks which can be easier to accommodate in ship designs than other low-flashpoint fuels, and under MSC.1/Circ.1621 5.2.1 can also be bound by a vessel’s shell plating when stored below the lowest possible waterline.

The trade and regulatory landscape of short-sea vessels make them ideal candidates for early adoption of new technologies such as methanol. Short-sea shipping can accommodate the use of fuels with low energy content — such as methanol — that require more frequent bunkering.

For use in marine applications, infrastructure such as methanol bunkering facilities and fuel supply systems are to be developed. A partnership between Copenhagen Airports, A.P. Moller-Maersk, DSV Panalpina, DFDS, SAS, and Ørsted has formed to scale up the production of industrial hydrogen in Denmark, with a vision of producing sustainable fuel for the road, air, and marine transportation networks by 2030.

The benefits of reduced emissions from burning methanol could be a significant contributor to reducing greenhouse gas emissions from the maritime industry. Existing methanol trade infrastructure can also be an important factor for the cost and availability of methanol over other alternative fueling options.

Using methanol as a fuel in methanol carriers for propulsion and power generation, along with the development of efficient and feasible dedicated propulsion systems, has already created an increase in newbuild cargo vessels powered by methanol. If methanol is produced renewably, these tankers could have an even greater potential to reduce life-cycle emissions while concurrently improving the renewable methanol fuel supply chain for other applications.

In dual-fuel marine engines, methanol may allow for efficient operations with various types of alternative fuels in the future. These applications may use methanol when it is available, with the option to burn other fuels at the convenience of availability, budget and supply.

The advantage of methanol over other gas fuels is its liquid state and ability to re-purpose existing infrastructure to include engines and vessels with efficient retrofits. Retrofitting a vessel’s tanks from conventional fuel oil, ballast, or slop to hold liquid methanol fuel is easier than installing LNG tanks. 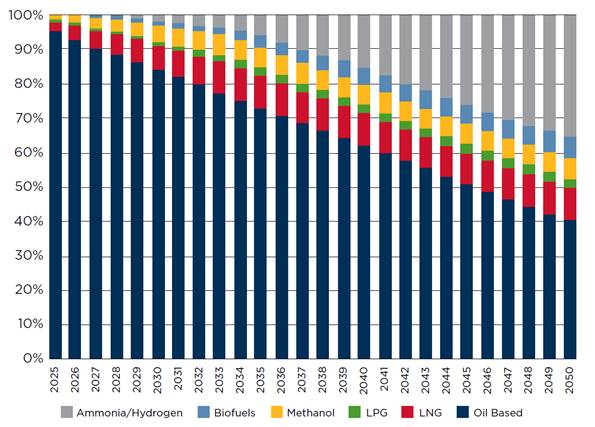 Research is striving to rapidly scale up methanol availability in terms of infrastructure as well as onboard applications and installations. Figure 3 shows the projected marine fuel use to 2050 as the industry strives to meet the GHG emissions-reduction targets mandated by the IMO.

While methanol’s uptake and application as a marine fuel is only just beginning, ABS is committed to ensuring owners, operators, shipbuilders and original equipment manufacturers are fully informed about its potential as they develop their decarbonization strategies.