Major seaports and inland ports have set goals to be zero-emission ports by 2040. Seaports have undergone substantial changes, moving from being a simple gateway to seaborne transport and inland waterways, supporting local industries for goods import and export, to becoming empowered as business ecosystems allowing for a multitude of actors to pursue a variety of operations. Municipalities have played an important role in this evolution. Thus, ports are becoming a gathering force for government and private actors to engage in joint efforts to provide best-in-class services.

This article looks at how digitalization can enable sustainable ports by enhancing their performance in a network as a transport node, as an energy node and as an information/digital node and suggests a model to assess digital maturity and performance in ports.

The port as a sustainable transport node, energy node and information node

Multi-modal supply chains engage different means of transport and transport nodes like seaports, inland ports or combi terminals. In supply chain networks, digital technologies can support the synchronization of actions pursued by various actors. Digitalization enables involved parties to stay up-to-date and to take corrective and mitigating actions based on the progress of the transport in its preceding stages and the availability of capacities in the succeeding stages. By gathering and providing information about the respective state of inbound and outbound consignments moved by different means of transport, transport nodes play an essential role in forecasting and prescribing actions on use of capabilities and providing services to episodic visitors. Ports as transport nodes could thus lead the way into a more synchronized future of maritime supply chains. This however requires that the ports develop their digital maturity, both for performing efficiently and sustainably as well as for providing data streams for more reliable planning to their clients, allowing for such things as elastic time slot management.

Ports also have a great possibility to act as energy nodes supplying sustainable energy to the various transport systems being used. In light of the increasing pressure for the sector to become more sustainable, both seaborne and inland waterways transport can contribute to introducing sustainable energy. The port as a sustainable transport node generates additional value-creating services for its customers, owners, and the outside world.

Digitalization allows a seaport to become a transport and an information node, providing an important means to be better integrated in the supply chain. The port as a digital node focuses on the total digital capability required to operate as a sustainable port, i.e. as a sustainable transport and logistic node, energy node, and information node). In contrast, the port as an energy node focuses on the sustainable energy supply capacity needed for the port to act sustainable, both for its own operations and to provide visitors with sustainable energy. A key question then becomes how the ports arrange their digital infrastructures to provide desired beneficial outcomes.

The port as a digital node means that a port acts both as a consumer and a provider of digital information / services, to be efficient, sustainable, and resilient in its complementary roles as a transport, energy and information node. The digitalization “trend” is encouraging solutions that are characterized by:

The port as a digital node directs attention to the efficient generation and sharing of data from connected infrastructure, resources, and actors being used for enhanced business intelligence, synchronization of activities, and new business opportunities. In this way the port becomes an enabler for exchanges for well-founded decisions on planning and coordination based on information about transport and infrastructure utilization and based on the transport object's status and the transport buyer's needs. The port as a digital node allows for enhancing its capabilities as transport (logistic), energy, but also as an information node providing vital information to the outside world. The digital concept addresses the following needs:

Importantly, an information-node port can also fulfil a key role in the context of the introduction of the maritime single window, which requires much more information to be shared digitally, providing cargo owners, and transport buyers with a basis to report to authorities.

Ports are at different starting positions and will adopt different degrees of digitalization. Some ports have taken pioneering steps to become first-movers in the adoption of advanced technologies for collaboration, synchronization, automation, and analytics. But, at many smaller ports, much of the information is not managed by digital means.

For most ports digitalization skills are only a small part of their capability set. Few smaller and medium-sized ports can run larger digitalization projects themselves. However, there is movement towards simplifying technological solutions, less complex and for specific use cases. Ports can also pool together and share development costs.

Based on the experiences from Swedish ports, a digital three-step maturity model has been developed, that accommodates the different situations for individual ports. The maturity model takes a formal digitalization strategy / plan as the basis for informing actions on subsequent steps. The first step is achieved with a digitally connected infrastructure, the second is the achievement of digital collaboration (both between the port actors as well as becoming established as a communication party to the outside world) and the final step is to have in place defined services and business models for digital business activity. The proposed three step model is therefore in line with several models emphasizing the collaborative capabilities within and outside the port. 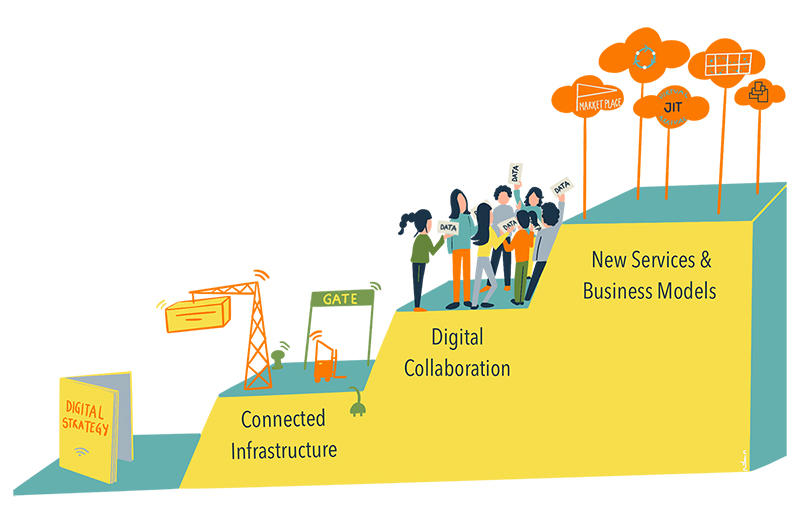 This model allows a port to adopt a gradual approach to developing its digital maturity. The model takes the port’s digital strategy as the point of departure and then pinpoints different use cases and digital services on the three levels of maturity. In the case that the port has not established a digital strategy, the model encourages its establishment as the framework for the port to support its digital maturity development. A digital strategy includes the goals and the action plans required to achieve those goals. It is based on an inventory of which parts of the infrastructure can be connected and reviews what the needs are.

The first step in the model is connected infrastructure, which means that the infrastructure and resources available in the port can be monitored and controlled in the original sense of the internet of things. These can be, for example, connected physical objects (quays, bridges, storage areas, etc.), work vehicles and load carriers. A connected infrastructure is a basic digital capability that can streamline port operations and reduce costs. It can also give port players the opportunity to increase control over their infrastructure and resources regarding its status and current utilization to improve efficiency and future capacity needs as an input to planning.

When connected infrastructure is in place, it is possible to share data within an organization, but also between port actors, and between different transport nodes (regardless of mode of transport). Such ability is called Digital Collaboration in the maturity model. This means that port actors, based on data sharing, can create better planning conditions throughout an overall situation, enable improved supply chain visibility, and communicate information regarding the status of goods and transport. For an effective digital collaboration, standards are required for compatibility between current systems both technically and semantically.

Once the infrastructure is connected and digital collaboration is established between relevant actors, new services and business models can be designed. These can be offered by the port itself, by other actors on behalf of the port or by third-party providers. Examples of such services could be to establish / be part of (digital) marketplaces for empty load carriers, energy supply, storage areas, and slot times for episodic visits.

This maturity model is now being validated and implemented for use by the Swedish ports that intend to raise their digital maturity and establish capabilities to become an information node. Guided by the digital maturity model, the aim is to assure that the ports become digitally integrated to support Sweden’s national aims of efficient and sustainable transport services.

Only 20 percent of the 4,900 ports in the world have established, or plan to establish, digital capabilities to assure transport chain connectivity. It is assumed that the situation is the same for other transport nodes, such as dry ports, combi terminals, and logistic centers. This is a major digital divide in the way of efficient, environmentally friendly, and resilient transport chains.

A digital performance index for ports (DPI-Ports) could be defined and implemented as a driver for upgrading the digital capabilities of ports across the globe. The DPI-Ports could be built upon existing accepted and appreciated indexes and should capture generic properties as well as specific characteristics for different types of ports. One aim is that the state-of-the-art ports inspire other ports to follow. The DPI-Ports could be published annually. Of course, such an index must maintain the highest levels of neutrality, methodology and robustness to be credible and respected.

This article appears courtesy of UNCTAD and may be found in its original form here.