NATO’s Autonomous UUVs are Working Together to Find Mines

Building underwater vehicles to operate autonomously is a good idea. Making them capable of looking for dangerous objects like submerged mines is clever. And when they can talk to each other and determine the best course of action to work collaboratively is not just smart, its brilliant.

Looking for underwater mines is an essential naval mission, but it’s a difficult, dangerous and time-consuming process.  Unmanned underwater vehicles (UUVs) and advances in autonomy have changed the paradigm.

“We’re trying to figure out where the unmanned systems best fit into mine countermeasures (MCM) operations,” said Dr. Catherine Warner, director of the NATO Centre for Maritime Research and Experimentation in La Spezia, Italy.  “We’re doing the science to make them better, smarter, interoperable, autonomous, and more effective.”

CMRE has steadily advanced the technology of UUVs for military applications like MCM and antisubmarine warfare (ASW). Now CMRE is helping warfighters get a clearer picture of what lies in the murky depths below, thanks to a fleet of unmanned vehicles that can communicate and cooperate with each other.

While CMRE procures commercially available UUVs and unmanned surface vehicles (USVs), the Centre’s engineers and technicians fabricate much of the hardware used for experimentation including the sensors and underwater communications systems used on the their autonomous systems.

CMRE uses a number of different UUV platforms in its MCM program, including a pair of specially configured General Dynamics Mission Systems Bluefin-21 UUVs.  One has been adapted as the Minehunting UUV for Shallow Water Covert Littoral Expeditions (MUSCLE) experimentation platform, and the other is the Black CAT (Collaborative Autonomy Testbed).  MUSCLE is equipped with a synthetic aperture sonar (SAS) to cover large areas quickly with high resolution and a digital library of objects to help it conduct automatic target recognition (ATR).

Black CAT has a forward-looking sonar (FLS), optical camera, multi-beam 3D sonar, a camera, and hosts a version of D2CAF (Distributed and Decoupled Collaborative Autonomy Framework).  The two vehicles work together.  MUSCLE processes data  in real time on board the vehicle to provide information such as data quality and the complexity of the seabed to aid planning and execution of missions, and then works with Black CAT to determine the best way to search for and  identify targets.

The CMRE MCM program also employs the Centre’s other vehicles, such as a SPARUS II UAV called BIONDo, equipped with an ARIS acoustic camera for close re-inspection of mine-like objects.

“We create our own systems, test them at sea, and get our own data,” said Dr Angeliki Xenaki, a physicist with a background in acoustics, and part of the collaborative autonomous MCM (CAMCM) team.  “After we conduct trials, we process that data and create new methods to improve the imaging.”

Xenaki said that synthetic aperture sonar (SAS) mounted on UUVs combines the signals along the line movement and can see objects from different angles.  “We program the vehicles with libraries of known mines and mine-like shapes. We use purpose-built targets so we know what we’re looking at so we can improve our algorithms.”

CMRE developed a high-resolution low-frequency SAS with automatic target recognition for mine-hunting applications; led the creation and adoption of JANUS, a NATO-standard protocol for communicating between underwater acoustic modems; and created D2CAF, so a network of UUVs can work together without a central brain, by distributing the processing between the different UUVs or “gateway” USVs.

“Our plan is to be able to send a fleet – or a squad – of autonomous, intelligent vehicles, over the horizon, where they can understand the environment on their own, and how best to plan and execute missions as a team,” said Dugelay.  “There are two main reasons for this. One is because we believe that these vehicles can actually accelerate the MCM timeline, but the other one is that we want to take the human completely out of the minefield. We’ve been working a lot on trying to make these vehicles more aware of what the environment is, and more aware in terms of where they are exactly, so we try to tighten underwater navigation because we don’t have GPS underwater and that is a huge difference with unmanned systems on the surface or in the air, for example.”

“We want to show where we are very confident there are no mines, or where there may be some risk to a ship in an area,” said Dugelay.  “We’re making the vehicles much more aware of how they ‘think’ they’re doing. Where we are less confident, we want our systems to go take another look, maybe from a different direction, or with another vehicle with a different sensor."

With D2CAF, the vehicles can communicate using CMRE’s JANUS underwater communications protocol, so they can talk to each other and work together. D2CAF allows the team of vehicles to share the processing among them and with the accompanying “gateway” USV if present, all connected by JANUS. 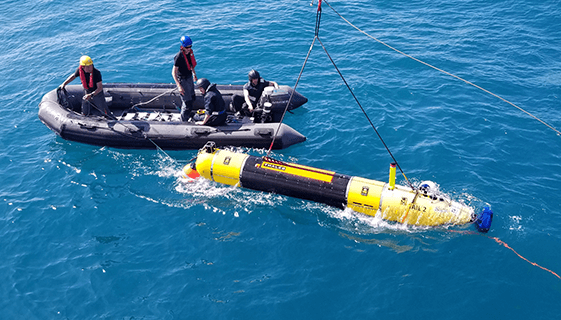 “They all can perform different tasks,” Dugelay said. “For example, MUSCLE goes out, conducts the wide area survey, and finds the detections. Black CAT uses its optical camera and a forward-looking multi-beam echosounder to conduct reacquisition of the target. They are two similar Bluefin vehicles that have been adapted to do different things.”

If MUSCLE cannot communicate directly with one of its collaborating vehicles, it can use the gateway buoy on a USV such as CMRE’s LiquidRobotics Wave Glider, to relay messages from one submerged vehicle to another, or back to the host platform.

“We’ve proven the deep learning; have put the automatic target recognition onboard the vehicles; and have the vehicles talking to each other,” Warner said. “We’ve participated in naval mine warfare exercises such as the Italian Minex, and when the  Italian Navy put their eFolaga unmanned vehicles in the water, our MUSCLE vehicle could talk to them. We didn’t do anything to their vehicles – but our MUSCLE vehicle could determine what kind of vehicles they were, and what kind of communications was needed, and MUSCLE was able to say, ‘Hey, eFolaga! I’m MUSCLE. Can you go take a look at this picture?’ And it worked."

Edward Lundquist is a retired U.S. Navy captain who writes on naval, maritime and defense issues.