An 81-year-old man has had his actions variously described as exemplary, disobedient and now, most recently, as reckless. Captain Apostolos Mangouras was master of the 81,000dwt tanker Prestige, and last week, in an unorthodox revision of the factual findings of a Spanish lower court, the Supreme Court ruled that Mangouras and the owner of the Prestige acted recklessly.

The Prestige had been refused permission to dock by Spanish, Portuguese and French authorities after a storm had damaged one of its fuel tanks. It eventually split in two and sank some 250 miles off the Spanish coast in 2002.

A 2013 judgement found Mangouras criminally responsible solely for serious disobedience to the Spanish authorities during the incident for his initial refusal to allow the Prestige to be taken under tow, but judged that this offence had not contributed to environmental damage. Mangouras was sentenced to nine months in prison. As this alleged disobedience was not causative of the damage, the court was not able to award compensation to the Spanish authorities.

The Supreme Court judges now find Mangouras guilty of gross negligence for his decisions during the voyage and his actions as events unfolded. His conduct is now said to have caused catastrophic environmental damage. The Supreme Court’s deviation from the findings of the La Coruna court is not only radical but also flies in the face of the courageous example Mangouras set in responding to the emergency, says industry body Intertanko. 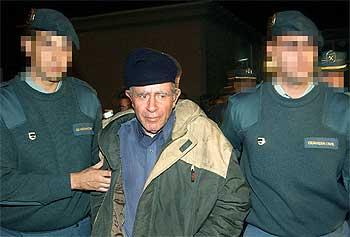 Mangouras’ actions were described as exemplary by the vessel’s flag state. Confronted with a refusal by the Spanish authorities to give the damaged ship refuge, Mangouras bravely did all he possibly could to protect crew, ship and cargo and to protect the environment. He remained on board with the chief engineer after the rest of the crew had been evacuated, in order to try and save the ship. Finally, against his judgement, he was obliged by the Spanish authorities to take a series of actions that resulted in the damaged tanker being forced to remain out at sea in appalling conditions, where she eventually broke up.

The Supreme Court notably reinforced the lower court’s acquittal of José Luis López Sors, the former head of Spain’s merchant marine department, who ordered the Prestige to be towed out to sea instead of to a place of refuge where an oil spill could have been contained. In refusing appeals against his acquittal the Spanish state absolves itself from any responsibility for the disaster.

The 2016 decision hands a civil liability victory to Spain’s government. The judges, headed by Magistrate Ana Ferrer, dismissed liability limitations because they found that the vessel’s master and owner had both acted recklessly. This leaves the P & I insurers potentially facing a claim of up to $1 billion. It is not clear whether the Spanish authorities will seek to recover from other parts of the industry, including the International Oil Pollution Compensation (IOPC) funds.

Ironically, last week also saw the launch of Europe’s new guidelines on places of refuge, developed jointly with the shipping industry and with the specific aim of resolving the issues surrounding the granting of a place of refuge. The proper implementation of these guidelines is intended to avoid repeating mistakes made during the Prestige and MSC Flaminia incidents.

Mangouras would be living a very different life had such guidelines been followed in 2002, says Intertanko. The organization considers the findings of Spain’s Supreme Court, the new conviction and harsh sentencing of Mangouras to be unjustifiable and fundamentally wrong. “This sets a deplorable precedent,” says Intertanko’s Managing Director Katharina Stanzel. “Are ships’ masters who exercise best professional judgement in impossible circumstances to be shamefully treated as criminals?”

Klaus Luhta, Chief of Staff, International Organization of Masters, Mates & Pilots, adds his voice to the industry concern the case has caused. “We support any system of penalty that does not involve mariner criminalization for these types of accidents except in cases of willful neglect. The case of the Prestige is more of a systemic maritime industry failure than that of any one person, and so the master shouldn’t be jailed.

“But politicians representing angry citizens with oil on their beaches need to show blood. Hopefully Mare Shipping pledges to compensate Captain Mangouras and his family very well for this inconvenience of a two-year prison term.”

The Company of Master Mariners of Canada has issued a statement saying: “The deplorable injustice of the Spanish courts in sentencing 81 year old Captain Apostolos Mangouras to two years in jail for negligence in the 14 year old case where the Spanish government refused a request for “Place of Refuge” that precipitated  the break-up of the tanker Prestige is worrisome to Canadian mariners because the same thing could happen in Canada.

“Just what the Court expects to punish by this ruling is a mystery.  If someone should be in jail, it should be the Spanish who turned a crisis into a disaster by their idiotic decision to order the ship away from the coast into the teeth of a gathering storm, when they were downwind of the storm! A classic example of the dangers of allowing non-mariners to make such decisions.

“Canada’s expert panel on Tanker Safety has recommended the formation of “a centralized marine casualty decision-making authority acting in the public interest, similar to those authorities established in the United Kingdom and Australia.”

InterManager has described the decision as abhorrent and has called on the shipping industry to support him after what have been 14 highly stressful years.

The sentencing of Mangouras was high on the agenda of the InterManager executive board meeting in London last week. The executive committee agreed to throw its full weight towards getting the shipping industry to act together in protesting what it described as a totally unfair court decision.