Barracudina: Lost But Not Forgotten

40 years ago, on November 26, 1978, the fishing vessel Barracudina disappeared in the Cabot Strait, about 20 miles south-west of Port aux Basques, Newfoundland, Canada. She carried with her to their watery graves her crew of five.

The Barracudina was returning from fishing off Cape North on Cape Breton Island, Nova Scotia. The weather was bad (forecasts gave gale/storm warnings, winds up to 40 to 50 knots), but was not beyond the experience of her seasoned crew. Radio communication was poor, the Master, Jim Chaulk, communicated by Citizens Band with a person onshore about 0030 hours Newfoundland Stand Time (Zulu (UTC) minus 3.5 hours) Sunday November 26 advising he was about 20 miles out and would be in port in about two hours.

That short communication was the last ever heard from the Barracudina and her crew. It is believed she capsized shortly after that time.

The official search effort did not start until much later. Although the last radio contact was just after mid-night (local time), and the cargo ship Chimo had subsequently reported an upturned hull around noon, and despite that a formal search and rescue had not yet been initiated, about 8pm on Sunday November 26 a Coast Guard buoy tender was tasked to investigated the upturned hull. The ship declined to sail due to the weather conditions prohibiting an effective search. In fact it was well over a day after the last contact that the formal search began.

No sign of the Barracudina or her crew was ever seen again.

The Barracudina, and her sisterships, Sand Launce and Blue Hake were 65 foot (20 meter) steel fishing vessels, built for the Newfoundland Provincial Government, intended to modernize the fishing industry. The length of 65 feet was a long-standing Canadian Government regulation, prohibiting vessels over that length from fishing within 12 miles of the coast. It was intended to protect the livelihood of the numerous inshore fishermen. As a result of this regulation many vessels were built designed to circumvent it, rather than being designed to best suit the purpose intended.

The initial design was based on vessels already in service, however, there were several significant design changes. The size of the winches was substantially increased, which also resulted in heavier underdeck stiffening. 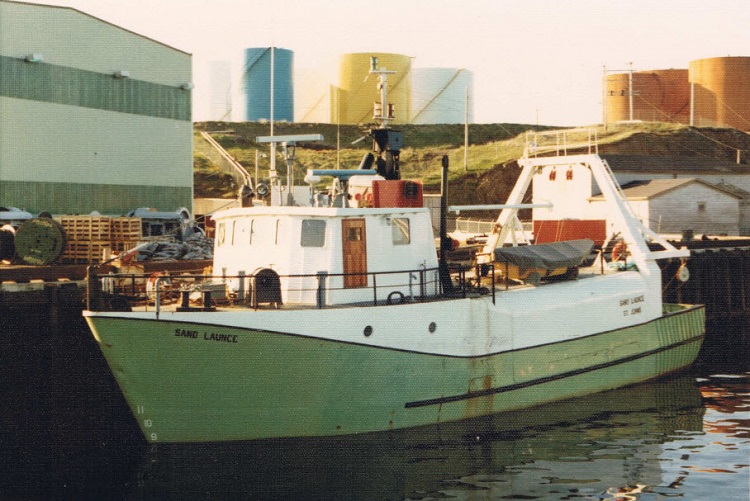 The shipyard and its staff were experienced in much larger vessels, which resulted in much of the outfit and piping, etc. being to larger vessel standards. The outcome was a significant increase in the vessel's lightship displacement, and the vertical center of gravity was much higher than designed. This resulted in the requirement for a substantial amount of ballast, which increased the lightship displacement even more. As a result, the freeboard was significantly reduced.

In addition, the fishing deck layout necessitated flush hatches, which if not properly secured could be subject to leaking. Several flush deck scuttles, each half a meter in diameter, were fitted to allow various fish species to be put down directly into the fish hold, if not secured they could leak or be displaced allowing flooding of the fish hold. These scuttles were at times subject to damage by loose fishing gear, potentially resulting in a downflooding opening into the hold.

A flush hatch was also fitted to the steering gear compartment, which was used for spare gear stowage. The stern was open to allow the trawling operations, gates were fitted to close the aft bulwarks port and starboard, and a flush deck flap fitted to cover the stern ramp. In particular, this flap, although very heavily constructed, was subject to wave damage, and at times failed, allowing the sea to roll up the stern ramp onto the fishing deck.

Shelters had been fitted above the bulwarks port and starboard in way of the fishing deck, these sheltered the crew from some of the weather while fishing, but necessitated larger freeing ports being fitted. All this resulted in a vessel which could be very wet on deck, and with several potential sources of downflooding into the fish hold and steering gear compartment, neither of which had a high bilge level alarm. Another factor was the flush deck aft, with the limited freeboard there was little reserve buoyancy in case of flooding.

These vessels met the stability standards imposed by Transport Canada Marine Safety (the Flag Administration). Being quite beamy (22 feet on a 65 foot length), they had very good initial stability (were very stiff in seafarer's parlance). However, their stability characteristics were different from those most fishermen were used to at the time. The high initial stability may have given the impression that the vessel's stability was greater than it in fact was.

There were some mechanical issues as well. As a result of the increased main engine size, the engine room ventilation was not adequate; a larger vent was fitted just below the foc'sle deck. In addition, often the engine room door was secured open. The steering system had several failures, it was more complex than that of the traditional vessels of the same size, its operation and maintenance was not fully understood by the crew.

When the steering failed at sea, rather than opening the bypass valve, which was somewhat concealed below a workbench, the engineer would often hacksaw through the steering gear pump's drive coupling, a process lasting about 10 minutes, during which time the vessel was at the mercy of the sea. In fact, the entire machinery installation was more like that of a large offshore fishing vessel scaled down, rather than that common to the experience of most fishermen.

I became involved with these vessels in 1974, while they were still under construction. Construction had stalled for over half a year, the Fisheries Department lacked onsite representation. I was hired to get these vessels, and two larger vessels, completed and into service. However, the key decisions had been made, and we worked our way through the hand we had been dealt. After completion, I sailed with all three vessels, working with their crews and acting, as required, as a superintendent to keep the vessels in service.

Jim Chaulk took a liking to me, I was young enough to be his son. In addition I was somewhat different than many of the crew he had sailed with. I had an international university education (in naval architecture) and had sailed with the Canadian Coast Guard and the offshore fishing industry. Many of his crew had little opportunity for much of a formal education, but had been well educated in life's experiences (experience I was yet to gain). 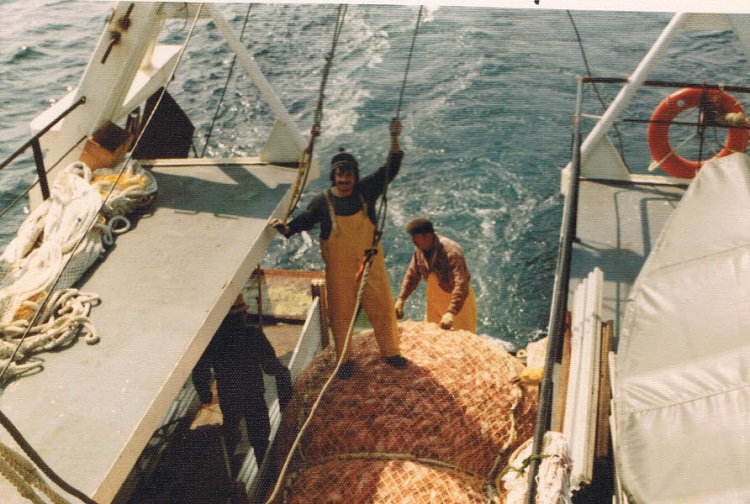 In due course, the vessels were sold to a firm in Port aux Basques, and I was tasked with other responsibilities by the Department of Fisheries. At the time of the Barracudina's loss I had returned to university overseas.

A formal investigation was held into the Barracudina's loss in April of the following year. The investigation's Commissioner, Judge Kevin Barry, in his 87 page report, thoroughly investigated many of the issues leading to, and in response to, this tragic incident. 40 witnesses were called; from the designer, the shipyard, the Canadian Federal and the Newfoundland Provincial Departments of Fisheries, equipment suppliers and their technicians, flag state and search and rescue organizations, radio station operators, the owner of the vessel, past crew members and the crew of the sisterships.

Barry found that: "The loss of the Barracudina cannot be attributed to the wrongful act of any person." Although the exact cause can never be determined with certainty, the report stated that: "The most likely cause of the disappearance of the Barracudina is that at the height of the storm it encountered extraordinary wind and wave conditions of great magnitude with which it was unable to cope; in consequence of which it was overwhelmed, then capsized and sank some hours later."

Although it was determined that no wrong-doing had taken place, the Commissioner did “admonish” most of the parties involved in the vessel's design and construction, operation and the subsequent search and rescue efforts:

• The designer and builder for the design and construction issues at the early stages of building process.

• The Master's decision to cross the Cabot Strait, given the weather forecast; perhaps imprudent, but not foolhardy.

• The delay by the owner and the crew's relatives in raising the alarm when the vessel was overdue slowed the response process, but given the local water temperature and the presumed rapid capsize, it probably did not affect the probability of survivors being found.

Several of the inquiry's recommendations did improve safety:

• Liferafts be fitted with hydrostatic releases, to ensure their activation in cases of rapid loss, such as capsize.

• Radio training requirements for crew members be enacted and enforced.

• Clarification of search and rescue procedures for cases such as this.

In particular, in his report, the Commissioner emphasized that search and rescue personnel should, in cases of uncertainty, act on the basis that there is an emergency, even if there is a possibility that this will subsequently be proven unnecessary.

Several things have not improved. Length restrictions, such as 65 feet, and 45 feet, remain, even though there are now quotas a other mechanisms to constrain fishing effort. In the years since Barracudina's loss, fishing vessels have been built to even more extreme proportions of breadth and depth, they have gone even further offshore, and at times been caught in heavy weather. A number of vessels have been lost, in some instances with their crew.

The Barracudina's sisterships faired somewhat better. The Blue Hake sailed until the mid-90s until she grounded on a rock off Cape Breton Island. I visited the Sand Launce around the beginning of this century, she was still going strong.

I knew most of the crew who were lost on the Barracudina. Captain Chaulk always acted professionally and treated me with respect even though I was young enough to be his son. Emmanuel Caines, the engineer, impressed me with his ability to keep things running. I do not recall them ever having to come in early from a trip due to equipment failure. Some people may consider fishermen, such as the Barracudina's crew, “a little rough around the edges.” My experience was that they were straight forward and honest, did not complain about their lot in life and got on with the job. To me, in many ways, they were the salt of the earth.

In the years since, I have been involved in many ship construction refit and repair projects. I have spent time at sea with many of the vessels I worked with. I have also had a regulatory role. I have been invited to speak on certain aspects of maritime safety. In particular, I have always endeavored to remember how important it is that we fulfill our professional responsibilities with integrity, even though at times there may be pressure to do otherwise. 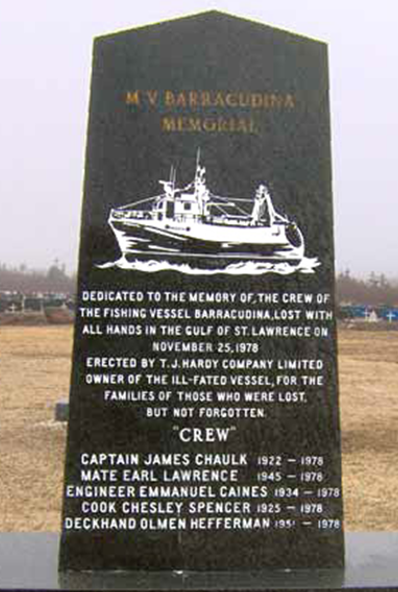 Lost but not forgotten, the fishing vessel Barracudina, November 26, 1978, and her crew:

From their Memorial Stone, St. James' Anglican Cemetery, Port aux Basques - Psalm 107: “They that go down to the sea in ships, that do business in great waters; These see the works of the Lord, and his wonders in the deep.”

John W. Dalziel, M.Sc., P.Eng., MRINA is an Adjunct Professor in the Department of Industrial Engineering, Dalhousie University, Halifax, Nova Scotia, Canada. He worked in the marine industry for half a century, largely in ship construction, refit and repair supervision, and in a regulatory role, and has sailed with the Canadian Coast Guard and the offshore fishing industry. He has spoken internationally on “Domestic Ferry Safety in the Developing World,” most recently at the World Maritime Rescue Congress, Bremerhaven, Germany.