The Royal Navy warship HMS Dragon has seized and destroyed ten tonnes of hash worth nearly $100 million in a record-breaking drug bust in the Persian Gulf.

In a productive 48-hour window, the Type 45 destroyer intercepted two dhows carrying a haul of illicit drugs on the notorious drug smuggling route known as the "Hash Highway."

It marks the biggest seizure of illegal narcotics ever recorded in the history of the Combined Maritime Forces, the multinational organization in charge of policing this stretch of sea.

These are the third and fourth smuggling-dhow busts for the futuristic $1.3 billion air defense destroyer in the space of a month, taking the total quantity of drugs seized to 13.3 tonnes during the first three months of the ship’s deployment.

“Seizing four hauls of this magnitude is a remarkable achievement and represents a significant dent in the pockets of criminals who seek to put these drugs onto our streets," said UK Defence Secretary Gavin Williamson. "The global narcotics network is a scourge that we are absolutely committed to tackling, as part of our commitment to security in the Gulf and across the world."

Dragon’s sailors and Royal Marines launched fast boats to halt the two dhows in two separate missions over a demanding two-day period. After barding and searching the boats, the servicemembers removed hundreds of sacks of narcotics worth more than $95 million. 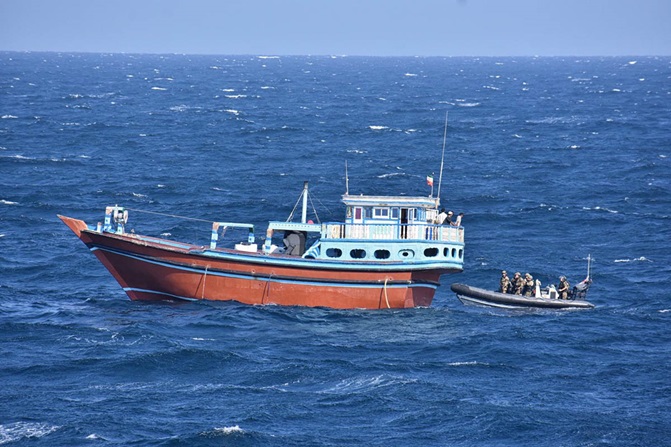 One of Dragon’s Boarding Officers, Royal Navy Lieutenant Jonathan Bennett, was among those in the heat of the action in both raids. “To achieve two major drugs busts in under 48 hours is a massive achievement for the team," said Lt. Bennett. "Our Royal Navy and Royal Marines boarding teams worked long hours in very challenging seas to remove nearly 10,000kg of narcotics.

"During the second boarding, the sea deteriorated resulting in increasingly hazardous conditions. We had to endure heavy seas, large amounts of ship movement and a dangerous working environment, all while removing over 300 heavy bags of narcotics and transporting them back to Dragon successfully," he added.

As weather conditions worsened, Dragon deployed her Wildcat helicopter to aid the boarding teams’ work. It allowed them to return the drugs back to ship quickly, with their work complete before midnight.

HMS Dragon left for this deployment in September and has been working in the Middle East as part of the Combined Task Force 150, a multi-national organization responsible for maintaining security in some of the world’s most important shipping lanes. She will be at sea through Christmas and the New Year.