On May 18, a massive tropical cyclone with sustained winds of nearly 150 miles per hour was barrelling across the Bay of Bengal towards the low-lying coasts of East India and Bangladesh. This supercyclonic storm Amphan (from the Thai word meaning “sky” and pronounced “um-pun”) was the biggest in the Bay of Bengal since the 1999 Odisha cyclone, which killed 15,000 people.

A few days earlier, when it was just a plain old storm, Amphan had swept through Sri Lanka, killing several people in heavy rain, floods and winds. It would go on to cause scores of deaths, make thousands homeless, and cause billions of dollars’ worth of damage. Yet it could have been much worse were it not for the latest computer forecasting and the right interventions by the relevant governments and international agencies.

Although the storm weakened slightly before it hit the coastline of West Bengal, it still overcame much of the network of embankments designed to prevent flooding. Coastal defences were rendered completely incapable of holding back the sea, with reports that sea levels were lifted by two meters or more on high tides and a massive storm surge. It caused flooding through coastal settlements and several miles inland, washing away bridges and roads.

Overnight #CycloneAmphan left a trail of destruction across parts of #India and #Bangladesh #RedCross and #RedCrescent teams were busy helping people evacuate & prepare, & supporting those in cyclone shelters.

Anyone who has ever been caught in such a storm will testify to this overwhelming force of nature. Winds travelling at 100mph will pick up huge objects and fling them around like toys. If you’re hit, you stand as much chance as if you were struck by a speeding train. During Amphan, buildings toppled in Kolkata, horrifically crushing people inside. Others were electrocuted, as shredded power cables turn wet surfaces into electric chairs. Even a week later in the city, water and electricity supplies were not restored, raising risks of disease at a time when pandemics are already on everyone’s minds.

This part of the world is used to heavy rain, but hit with monsoon-like rainfall in the wrong season, farmers in Bangladesh were caught unaware as floods caused by the sheer weight of rainfall rushed through their fields. The water gouged away productive soil and ruined crops. By way of comparison, had that amount of rain had fallen over the Thames basin, parts of Oxford, Reading and London would have been underwater within hours.

This was a natural disaster by any measure. Yet many people escaped the worst effects of Amphan because of some heroically accurate weather and flood forecasting.

On 12 May, before the low pressure conditions that were the germ of the cyclone had even formed, and a full eight days before landfall, global multi-model weather forecasts, run on supercomputers at weather centres across the world showed with good accuracy that something major was about to happen. Conditions were right for a cyclone to form, pick up energy from the warm ocean, and track towards India and Bangladesh. Three days before landfall, the forecasts had become so clear that the Indian and Bangladeshi state meteorological departments were able to issue clear warnings. Amphan was the first cyclone of the North Indian storm season, and was a good test of how ready we are. 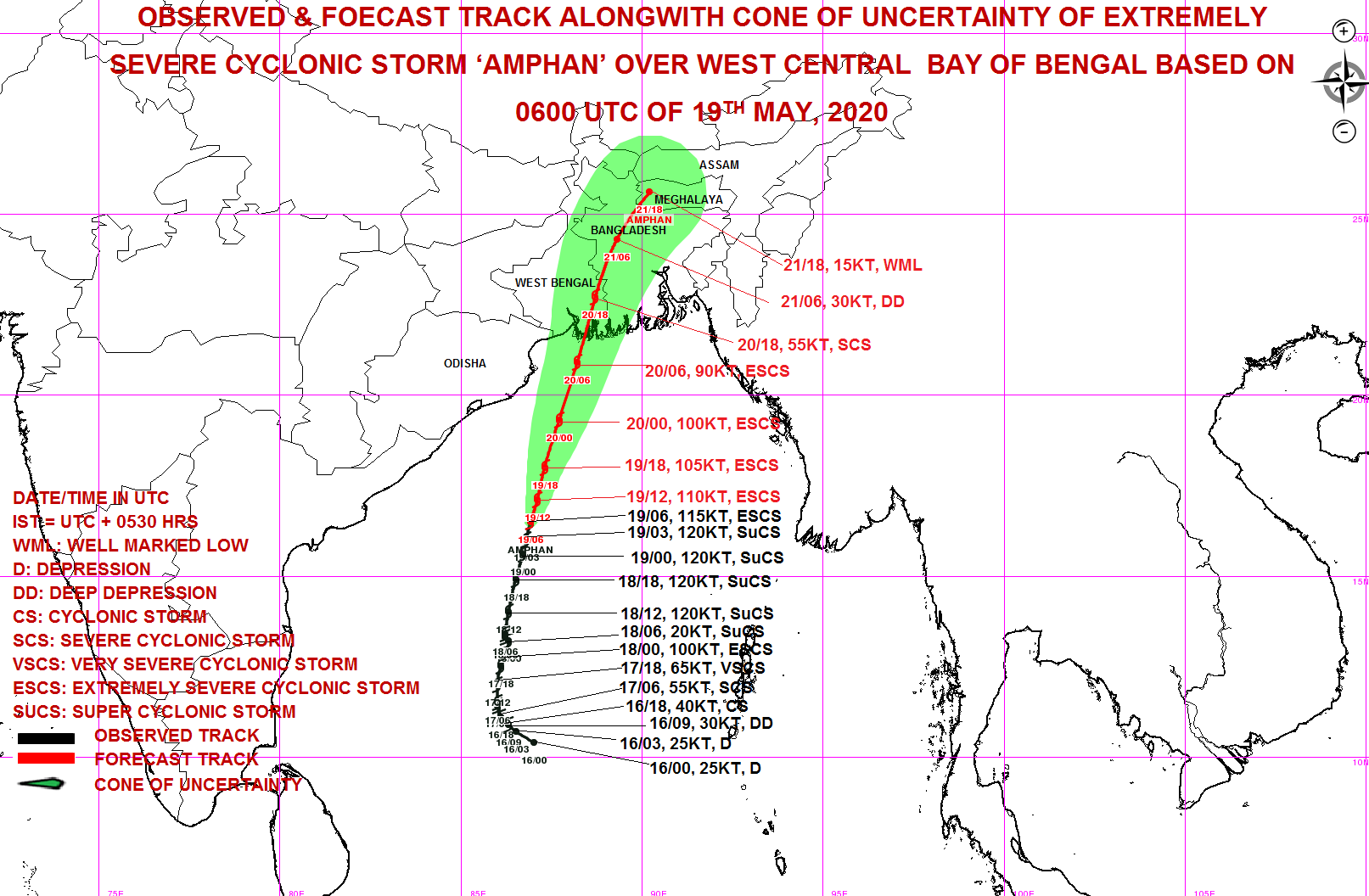 A good forecast is only the starting point, however. A well-conducted action plan is the key to saving lives. This is where the anticipatory response by national governments and humanitarian agencies has been particularly impressive. After the warning from the Indian and Bangladeshi meteorologists, more than 4 million people were evacuated from coastal areas, even as authorities also coped with the pressure of COVID-19. Evacuation centres had reduced capacity and many temporary shelters had to be put in place at short notice; yet the job was done.

There is still lots of work to be done in order to understand what will happen with tropical cyclones as the climate changes. Their formation is based on a complex series of things, including ocean temperatures and currents, and the strength and direction of winds. These are fiendishly complex physical processes, and are all influenced in different ways as the planet heats up. How all these different elements interact determines how strong the winds get, how high the storm surge is, how much rainfall they pick up, where they go, how quickly or slowly they move over land, and where and how fast rain falls out, creating intense deluges.

This is complex science. Other climate change impacts are easier to predict – for example, we know that in a warmer world, we are more likely to see dangerous heatwaves. Some studies have suggested that a warmer world will mean we see fewer tropical cyclones in total, but bigger and more damaging events when they do occur, as a warmer ocean and atmosphere can carry more energy for destructive storms to form.

Of course, climate change impacts more than just one type of weather. In this part of Asia, extreme heatwaves are perhaps a less violent, but more deadly phenomenon – and summer is on its way. The joint threats of COVID-19 and heatwaves are going to be particularly tricky. Add to that the coming monsoon season, threats of droughts and other extreme weather, and it’s clear that the earlier people can be warned and take action to protect themselves, the better.

On Saturday, one suspected case of COVID-19 was detected aboard the cruise ship Paul Gauguin. The vessel had just resumed service for regional passengers in mid-July, and she was on her first voyage with international customers since the beginning of the coronavirus shutdown.  When the suspected case was discovered, all passengers were informed and asked to stay in their cabins. The vessel suspended her itinerary and returned to her home port at Papeete, Tahiti, arriving and mooring at the main...

[By Lt. Sarah Ermoshkin] It has been nearly a month since the first incoming freshmen, or plebes, arrived at the United States Naval Academy (USNA) to check in for their immunizations, vaccinations, blood draws, eyeglasses, and coronavirus (COVID-19) test. Following months of planning and coordination with Naval Health Clinic Annapolis Brigade Medical Unit, plebes have left their restriction of movement status after a second COVID-19 test and are now engaged in summer training. In previous years, nearly 1,200 plebes would...