On a daily basis we see numerous ways that a pilot ladder is secured, and many are wrong and dangerous for the user. Insurance companies may even deny liability after an incident because you could have known or should have known the arrangement was dangerous. If you still use it, it’s on your own behalf.

In the next few chapters I will discuss the arrangements we see frequently and explain why they are non-compliant. There are 1,000 ways to rig a ladder, and only one of them is right. Names of the vessels involved will not be displayed in the article; the Facebook page “dangerousladders” often displays names and destinations of the vessels involved, mainly to warn our colleagues in the vessel's port of destination. 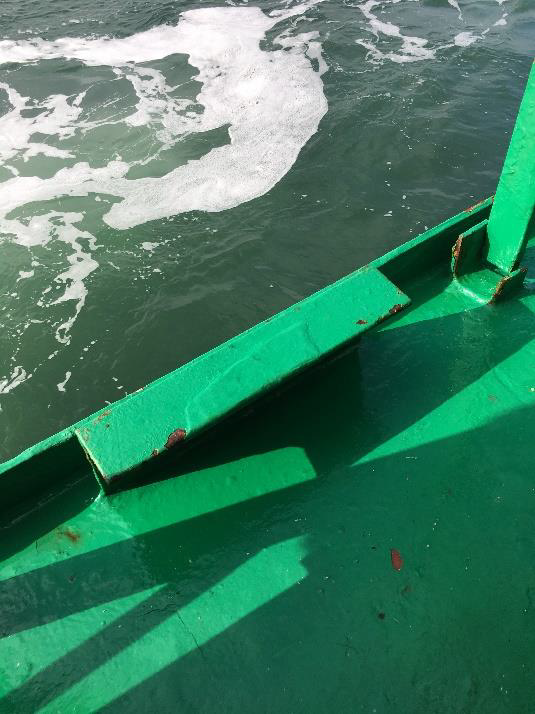 A photo explains more than 1,000 words. Above we see an example of a so-called deck tongue, installed on one of our regular visitors. Seems like a great and simple solution to install and adjust a pilot ladder - ingenious invention! Unfortunately this system is non-compliant and therefore downright dangerous for anyone who might have to use it (pilots, agents, surveyors, crew changes, etc.). 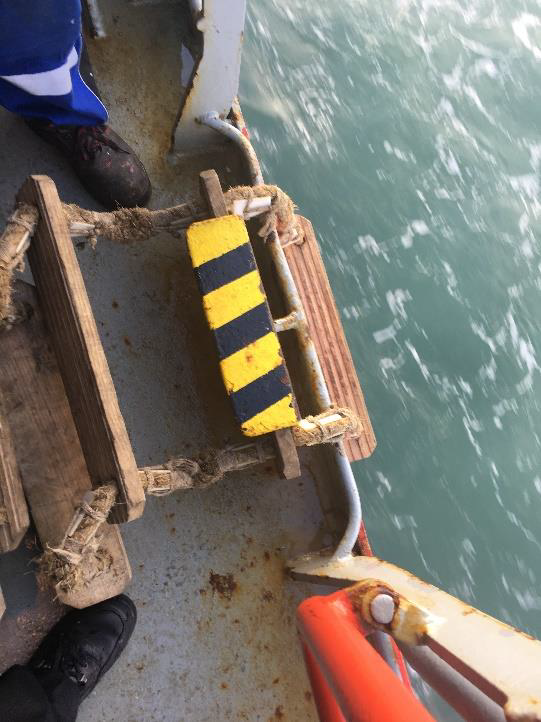 Above we see the deck tongue in use holding the ladder - or to put it better, holding one step. Besides all this, the ladder seems rather old and worn. Let’s have a look at the regulations to explain why this setup is dangerous.

After reading this, we find out that each side rope can handle 2,400 kilos (4,800 together) and that each step can handle a weight of 880 kilos. The strenght of the deck tongue? Don’t have the slightest idea. Is it tested and certified?

So the ship has a tested ladder that can handle about five tonnes on the sideropes, and then the crew sets it up by putting a step that can carry 880 kilos behind a steel plate. One touch of the pilot lauch and it’s gone - rather inconvenient for the poor guy standing on the ladder at that moment.

Swell, swinging of the ship or the launch lifting the ladder can also have the dangerous result that the ladder comes loose out of this deck tongue and goes overboard. Besides that, securing a ladder is something different than putting it behind a piece of welded steel. SOLAS and IMO provide the minumum safety rules concerning ladders, and less is absolutely not more in this case. 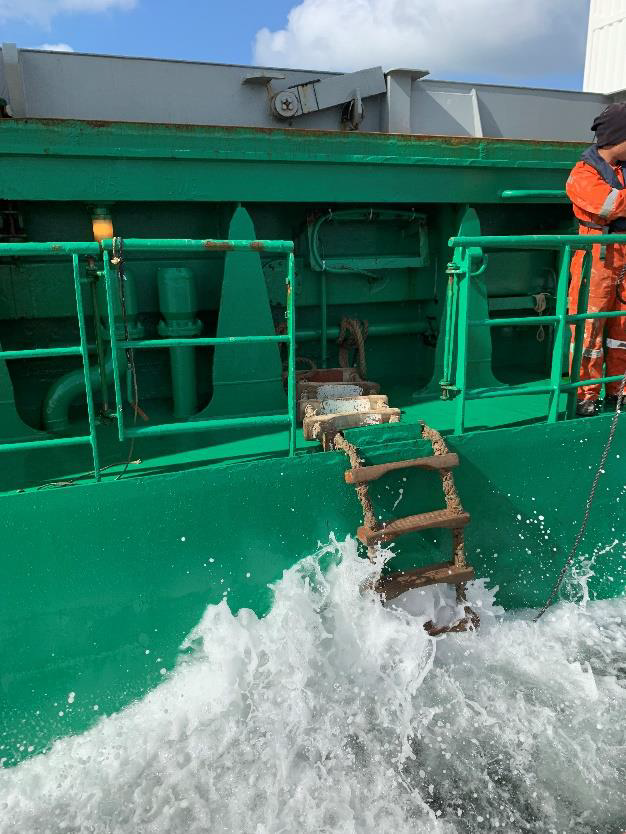 A notorious example of a ship with a deck tongue arrangement, and it's not even a pilot ladder 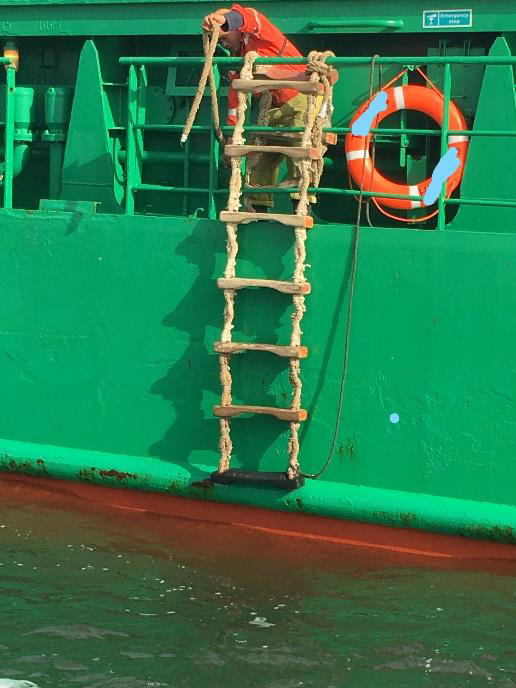 Notorious offender with a bulwark setup. It’s not even a pilot ladder and there are at least six visible non-compliances.

Another easy way to prepare a ladder: throw it over the railing, tie the sideropes together with a piece of rope you found on deck and you have the ladder ready in a jiffy! The ladder above is not actually a pilot ladder, something to get into in another article.

We have already seen that the ladder has to be secured to strongpoints on deck. A railing is not a deck, but maybe it looks easier to rig it this way.

This setup (below) forces the pilot to stumble sideways to reach the entrance. 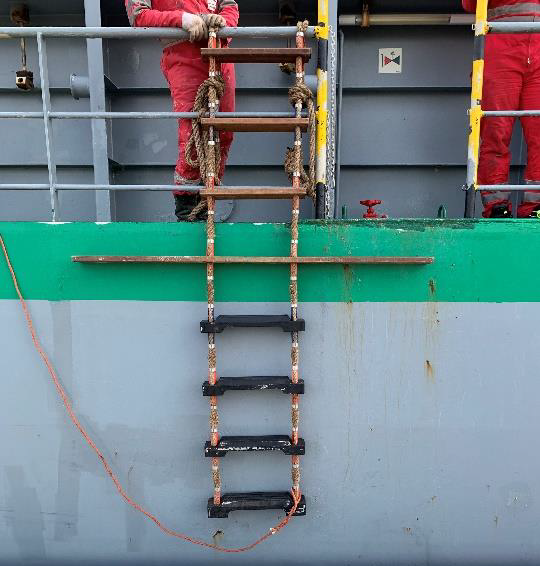 We have already seen that the ropes of the ladder can handle 2.4 tonnes on each side. Are you sure the railing can handle five tonnes? We have all seen beaten up and damaged railings in our career, and we’ll never be able to find out who spot welded the railing in a faraway shipyard many years ago

Conclusion: ‘securing’a ladder on a piece of railing is non-compliant and therefore dangerous. Have them secure the ladder to strongpoints on deck and don’t forget to report them. 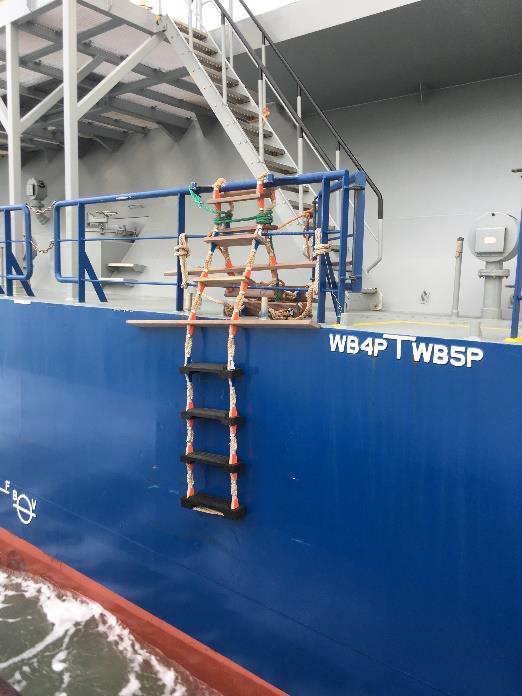 Sideways shuffle again. How strong is the railing?

3) Platform placed over the securing area of the ladder 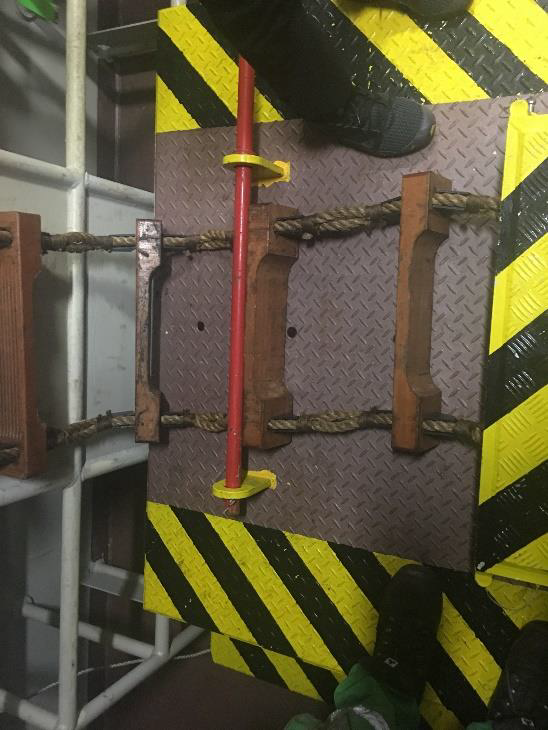 Always a surprise when you lift the lid

Having a platform built over the securing area of the pilot ladder is absolutely not illegal, and it can even improve access: no debris or other tripping hazards. But 99 times out of 100, when you lift the lid, there’s a surprise underneath: a steel bar (which we’ll discuss later), a deck tongue or just nothing to hold the arrangement in place. 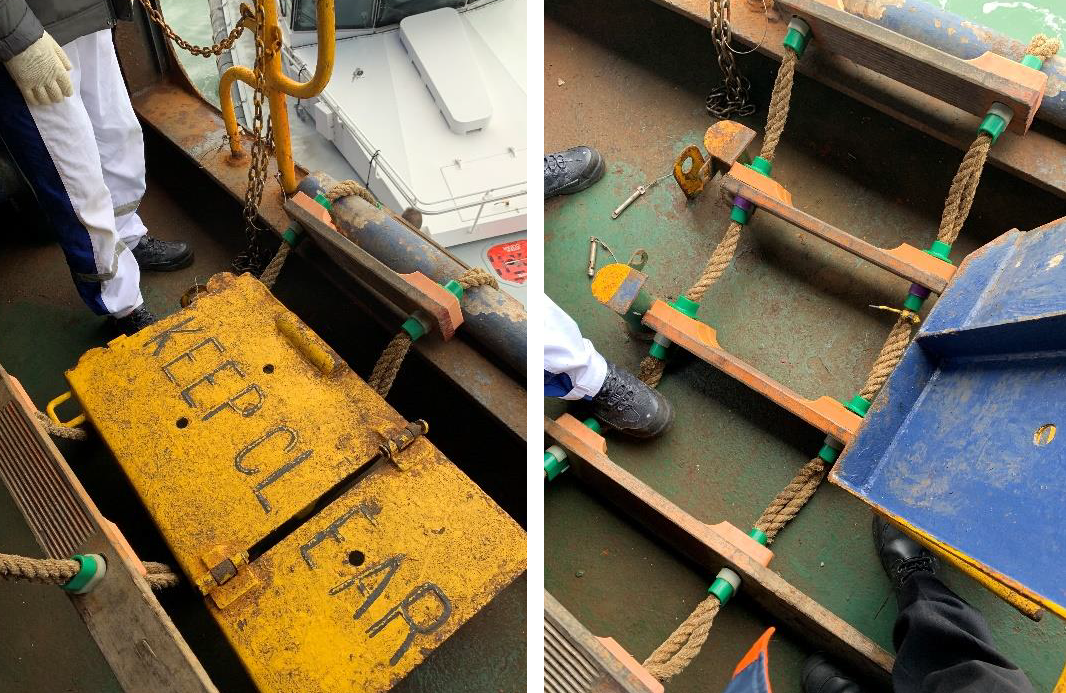 Looks like a safe access (left), but a three cm piece of steel is the only thing between life and death (right)

Basically, whenever you encounter a platform over the ladder, just ask them to lift it because you want to check the way of securing the ladder. As we see in the photo above, there was no securing at all.

A nice and swift way for the crew to install, and it can be a swift way for you to get down to the deck level of the pilot boat too.

Again it’s non-compliant and therefore dangerous, so don’t use it. Have them secure it to strongpoints on deck and don’t forget to report the vessel. 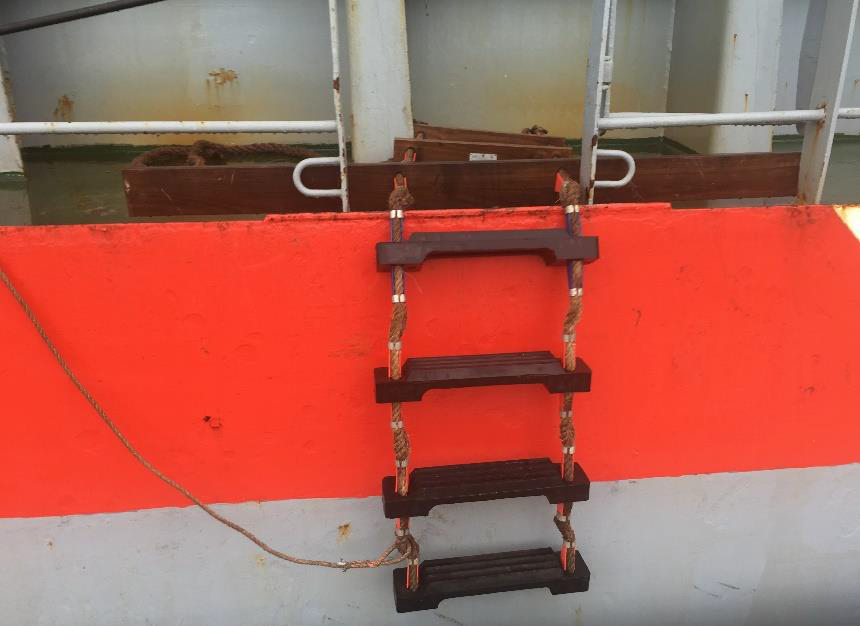 A spreader is a great invention to prevent a pilot ladder from twisting. Without a spreader you might look at the horizon instead of the ship’s side all of a sudden. How do you get back in a good position when something like that happens? Therefore every ladder with more than five steps must have a spreader (IMO A.1045(27) rule 2.1.4).

That is what a spreader is made for - not for keeping a ladder secured to strongpoints on deck.

As we know, steps can handle 880 kilos and side ropes 2,400 kilos each. That’s the main reason you cannot secure it this way. One touch of the pilot boat and the ladder will be damaged beyond repair, as will be the poor soul standing on the ladder. 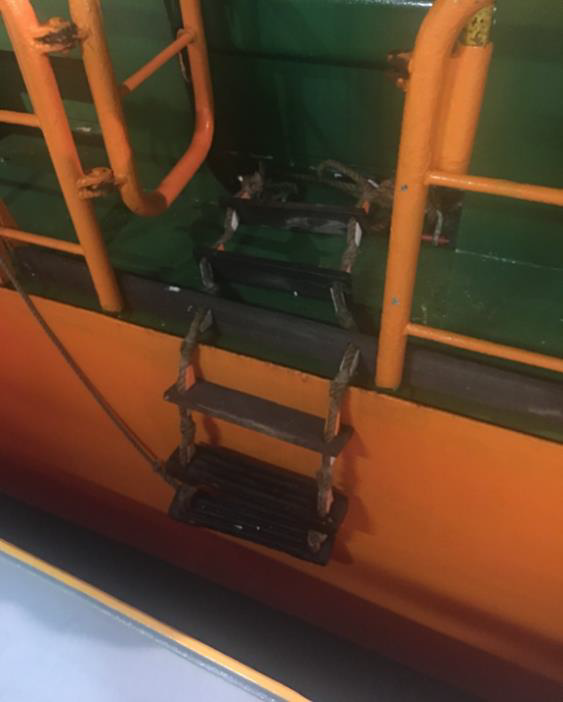 Again a spreader as a securing method

I feel very lucky I've never run into this method, but at least two of my colleagues have. Let’s just assume you have to board a vessel and the ladder has to be lowered a bit, which goes rather rapidly. Before you know it you look up, see a smiling face and get a thumbs up - “Ready Mr. Pilot!”

When you start climbing what might be a real Jacob’s ladder, you reach the top and two quite large seafarers are standing on the sideropes on deck.

They must have read the instructions wrong. The instructions clearly state: the ladder has to be secured to strongpoints on deck, not to strong men on deck. In this case, the vessel was reported and the captain was angry - not with the guys on deck, but with the pilot for reporting his vessel.

[There are more than a few wrong ways to rig a pilot ladder, and the list will be continued in Part Two.]

Arie Palmers is a registered pilot in the Scheldemonden region.