The persistent eutrophication (being too rich in nutrients) of the Baltic Sea prompted the IMO’s Baltic Member States to tackle shipping’s < 0.1% contribution by designating the Baltic Sea as the first Special Area under Annex IV of IMO’s MARPOL Convention [1]. Passenger ships must give sewage to wastewater treatment works (WWTWs) ashore via the port reception facilities (PRFs) or operate a nutrient removal sewage treatment plant (STP) on board prior to discharge. It has been perceived as a positive move. But how special is the Special Area?

Rules at sea vs. rules on land – where do they meet, and clash

The coastal waters and the PRFs are where the local rules on land and the international rules at sea meet. The IMO does not have jurisdictions over the local rules, but the IMO’s Baltic Member States can, and should, reflect and integrate their local rules when creating the Special Area. 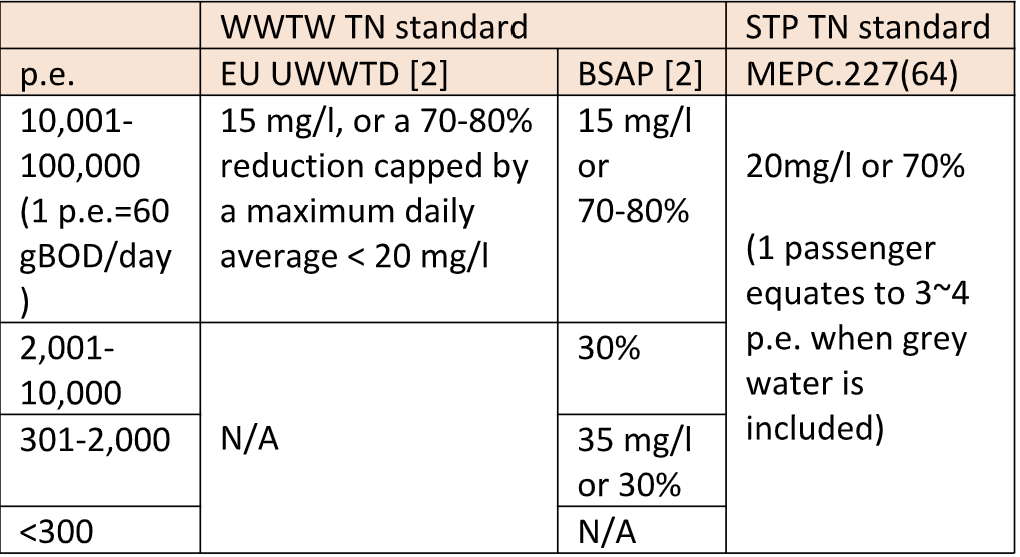 12 vs. 10,000. Total nitrogen (TN) removal is required for 12 or more passengers at sea, but 10,000 or more population equivalents (p.e.) on land (see table). On land, low capacity TN removal applications are known to have their limitations and diminishing benefits [2, 3]. The significant discrepancy in TN removal population threshold has led maritime industry into uncharted waters. Are TN removal STPs for 12 passengers available and viable?

Availability of small STPs. Nutrient removal STPs have been tested and approved [7], but unfortunately, along with certified “magic boxes” [8,9] which become nutrient leakage for the Special Area and give ‘availability’ a different meaning. The lack of enforcement under MARPOL Annex IV, which has resulted in poor STP performance status over the decades, has now eroded the Special Area too. Ship sewage can be over 10 times more concentrated than urban wastewater [4] and has 500~1,000 mg N/l of ammonia [5,6] when collected by vacuum.

Ships also have space and logistic constraints, they pitch and roll, and they lack the relevant skills and resources. These challenges are not reflected by the IMO’s approval regimes. Furthermore, an available technology may not be viable when it entails excess costs, natural resources, and adverse impacts that outweigh its benefit. However, STP availability and viability cannot be assessed without the proper enforcement as a starting point to break this vicious circle. Fundamentally, the declared availability and viability for 12 passengers is at odds with the 10,000 p.e. threshold on land [2]. They cannot both be correct when resolving the Baltic eutrophication issue.

Open-ended percentage removal targets – a disservice. The EU Urban Wastewater Treatment Directive (UWWTD) caps the percentage TN removal target of WWTWs on land with a maximum concentration ceiling [2]. But such a ceiling is absent for ships [1]. As such, the EU standard can be exceeded by 8-15 times under the Special Area rules. The ammonia limits imbedded in the national regulations to address effluent ammonia toxicity can be exceeded by 10~70 times, considering the typical Water-Quality-Standards-based ammonia permit of around 4 mg N/l [10] and some national coastal limits of 5~30 mg N/l [11,12]. Furthermore, the percentage removal targets are almost impossible to verify onboard.

Discharge bans in ports. Many ports have banned STP discharges in port waters, including the discharges from the so-called advanced wastewater treatment (AWT) systems with proven performance far more superior than that of equivalent coastal WWTWs. The ban contradicts with the intention of the IMO rules which allow STP effluent discharge without restrictions. The creation of Special Area further promotes reliance on PRFs. For major PRFs with adequate reception capacities that are served by mega-scale state-of-the-art municipal WWTWs with spare treatment capacities, it makes sense.

Adequacy of PRFs. Many major ports have invested in newer and better reception facilities. However, PRF adequacy is influenced by advanced planning of ship itineraries, PRF utilisations, connections at each relevant berth, the inclusion of grey water, and the fee systems, etc. The emerging aspirations to receive sewage from cargo ships [20] may spread the uncertainty of PRF adequacy to smaller and more remote ports that are served by smaller WWTWs. In any case, PRF adequacy is not all.

Maximum permissible sewage concentrations. Wastewater entering local sewers and WWTWs can be restricted by maximum permissible concentration limits to protect the local infrastructures from corrosion, odour, toxicity, and health and safety risks, as well as to safeguard the compliant performance of local WWTWs. Ship sewage readily exceeds these limits by a long way (see table), not to mention STP sewage sludge. The situation could be alleviated when one day the IMO regulates ship grey water together with sewage – a necessity for having an effective MARPOL Annex IV [20].

Not all WWTWs remove nutrients. Not all WWTWs have state-of-the-art nutrient removal technologies. Those WWTWs serving <10,000 p.e. are not required to remove TN. They become a nutrient leakage when receiving ship sewage. Larger WWTWs can be overloaded by ship sewage during peak loading conditions especially in the absence of storage tanks in PRFs [5]. Crucially, the timing, quantity, or quality of ship sewage are not visible to the receiving WWTWs. The disposal route of road tankers and barges may not be traceable. This lack of transparancy undermines the extended producer responsibilities (EPR) and risks potential nutrient leakages from facilities ashore.

Should a passenger ship rely on PRF or STP? Many ship owners choose to install STPs to gain flexibility and green credentials. But not many people have recognised that treating sewage on some days and giving it to PRFs on other days can risk STP performance. This is because a proven biological TN removal process relies on daily sewage influent to perform.

Animal carriers. Animal carriers are not passenger ships, but animal sewage contains nutrients. A carrier with 22,500 cattle produces the same amount of phosphorus as a ship of 375,000 passengers [22]. It can be a significant nutrient leakage for the Baltic Sea [23] as well as other waters of eutrophication concerns.

Diseases. The IMO introduced the most stringent Coliform standard for sewage discharges in order to minimise the spread of waterborne diseases by international shipping. But there is a loophole: untreated sewage received by the PRFs can carry international diseases into the local environment [24].

Comparing to Alaskan water whereby the local laws have successfully introduced grey water regulation and compliance monitoring to large passenger ships for 2 decades, the Baltic Sea Special Area has inherited the weaknesses of MARPOL Annex IV, as evident by the certified magic boxes and a lack of monitoring or visibility to STP discharge performances. On land, in addition to the uncertainty of PRF adequacy, there is a lack of transparency to sewage disposal routes and the capabilities of receiving WWTWs. Importantly, issues such as the conflicting TN removal population thresholds (12 vs. 10,000), the open-ended percentage TN target, the exceedances against the local permissible concentrations, and the nutrient contribution of animal carriers can have significant and long-lasting implications.

The IMO needs to showcase the effective implementation of its environmental rules. This well ringfenced Special Area can be a candidate. To address the <0.1% nutrient contribution, money and natural resources are being invested twice, once in the PRFs, and once in the STPs. Industry is committed. The Baltic Member States will no doubt be well equipped and committed to showcase the effectiveness and the benefits of the Special Area which they initiated. Time will tell if the Special Area is really special.