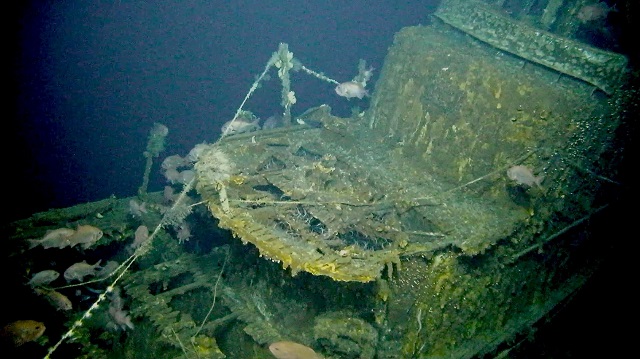 USS Grayback, one of the most successful submarines of the war, was a Tambor-class submarine launched on January 31, 1941. She was under the command of Lieutenant Commander John Anderson Moore and was a major part of the submarine offensive from the start of the war. She made 10 war patrols total and is credited with sinking 14 ships, totaling 63,835 tons, including an Imperial Japanese Navy submarine.

Post-war Japanese records indicated that on February 26, 1944, USS Grayback suffered damage when land-based Japanese naval aircraft attacked her in the East China Sea, but it was assumed she sank the naval transport Ceylon Maru the next day. That same day it was recorded that a Japanese carrier-based plane spotted a submarine on the surface in the East China Sea and attacked. According to Japanese reports the submarine "exploded and sank immediately," but antisubmarine craft were called into depth-charge the area, clearly marked by a trail of air bubbles, until a heavy oil slick swelled to the surface.

In preparation for the expedition, the team's Japanese historian and researcher, Yutaka Iwasaki, located and re-translated the original documents to discover a 1946 post-war error in the longitude. This original error remained for 75 years until discovered by the Lost 52 Team. The new data, along with newly discovered and translated Japanese mission logs, enabled the team to refocus their search on the area southwest of Okinawa. On June 5, 2019 the team discovered the USS Grayback 100 miles from an area recorded in WWII historical records.

"The discovery of the USS Grayback provides us another precious opportunity to honor the brave Sailors who sacrificed so much in combat to preserve our freedom. Those selfless and committed submarine Sailors left a legacy of courage that we strive to attain every single day as we prepare the next generation of U.S. Navy Submariners," said Rear Adm. Blake Converse, Commander, Submarine Force, U.S. Pacific Fleet.

The confirmation of the site as a U.S. Navy sunken military craft means it is protected from disturbance.