Dutch shipbuilder Veka Group is building two hybrid trimarans for transporting personnel and freight to offshore wind farms. The company claims that the vessels will be the first hybrid trimarans in the world.

The 33-meter (108-foot) trimarans will have five water jets installed. Three of the jets will be run directly by diesels engines. However, the outer two water jets are driven by permanent magnetic generators.

The vessels also have batteries on board that are charged by generator and can run the outer jets. This means they have several levels of redundant propulsion and will be able to sail for approximately an hour on the batteries.

The third bow is designed to ensure additional stability and comfort, and stabilizers will be built into the hull.

Other innovations on the vessels are designed to make them more stable and to reduce the risk of seasickness. For example, the ships have lower windows than is customary, so that the passengers have a better view.

The two vessels will be capable of transporting 20 tons of freight on the foredeck. Inside, there is space for 24 passengers in comfortable business class seats. There are six cabins on board for the ship's crew, along with a mess room, changing locker and space for the crew. This allows the ships to be deployed 24 hours per day.

The trimarans are being built for the Danish shipping company World Marine Offshore. The vessels will be used for work at offshore windfarm in Europe. Delivery is scheduled for the third quarter of 2017.

Catamarans have more commonly been used to transport personnel to and from offshore wind farms, and in 2013 the shipyard delivered its first one to Royal Wagenborg. 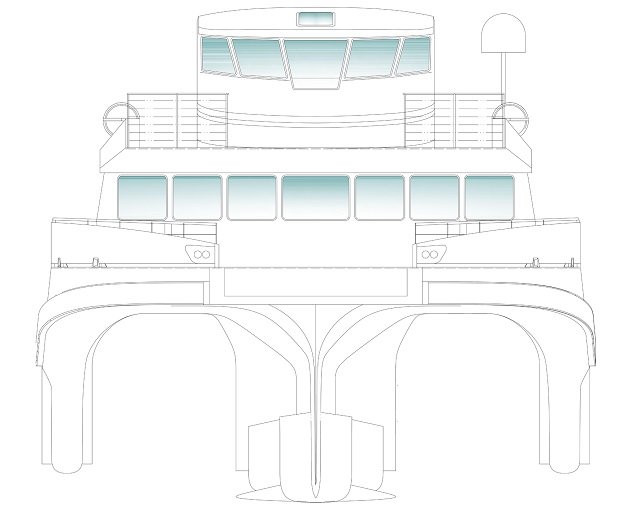