The world’s first hydrogen-powered tugboat arrived in Belgium on October 27 after completing construction in Spain. The installation of the vessel’s hydrogen system will be completed at the Port of Ostend as well as trials for the tug before its expected delivery by the end of this year. The goal is to have Hydrotug 1 fully operational at the Port of Antwerp during the first quarter of 2023.

The tug was built at the Armón Shipyards in Navia, Spain where it was launched on May 16. It is being developed in a demonstration project partnership between CMB.Tech and the Port of Antwerp-Bruges. CMB.Tech says that it is taking a leadership role in the transition of ships to environmentally-friendly fuel and the tug is the latest in a series of unique projects demonstrating hydrogen-powered propulsion. Earlier this year, the company also launched the Hydrocat 48, a hydrogen-fueled crew transfer vessel. 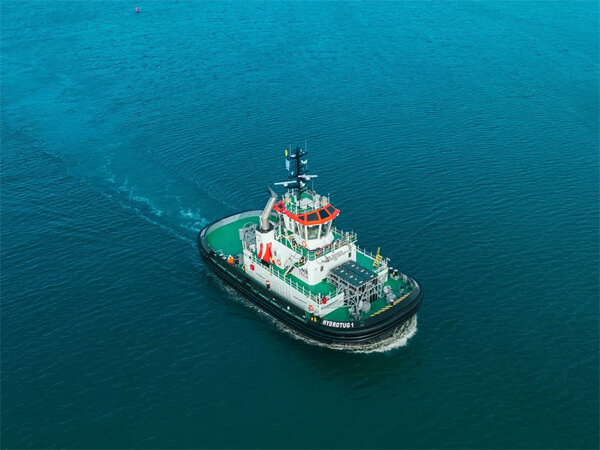 CMB.Tech is leading the project to develop Hydrotug 1 (CMB)

The Hydrotug 1 is outfitted with two BeHydro V12 dual-fuel medium-speed engines that can run on both hydrogen and traditional fuel. The tugboat is the only one of its kind and the first in the world to be powered by combustion engines that burn hydrogen in combination with diesel. She has a power of 5,500 hp.

Port officials report that Hydrotug 1 can store 415 kg of compressed hydrogen in six racks installed on deck. They estimate that this eliminates emissions equivalent to 350 cars. In addition, each hydrogen refueling of Hydrotug 1 saves the total emissions of one car for one year.

Ostend was chosen as the location for the final outfitting and testing because the tug can use the hydrogen facilities of CMB.TECH's Hydrocat 48, which operates from the port.