Ocean Gyres Moving Towards the Poles

The Donkey Sanctuary's latest report into the ejiao trade reveals that millions of donkeys are being killed by traders for their skins, and animal welfare abuse and biosecurity risks are rife at every stage of the skin trade, both in its legal and illegal forms.

The gelatine in donkey hides is a key ingredient in ejiao, and tens of thousands of donkeys, many of whom are stolen, are rounded up to endure long journeys to slaughterhouses on crowded trucks without access food, water or rest. An estimated 20 percent of animals die on route in some cases. Others will have broken or severed legs, or infected wounds, and be near starvation.

Donkeys are walked over multiple days through trade corridors from land locked countries in the interior to countries such as Nigeria, Ghana and Côte d'Ivoire, where they are finally slaughtered. Here slaughterhouses can process large numbers of donkeys and their proximity to the coast enables easy shipping to China.

On arrival at the slaughterhouse, donkeys can be held for days in packed compounds, again without access to food or water, before finally being slaughtered, often brutally. As injury and illness do not outwardly affect the quality of the skin, there is no incentive for local traders to ensure the humane treatment of donkeys. The death of a donkey due to injury, disease, thirst, starvation or stress is, at times, viewed favorably as slaughter fees are avoided and the skin is still processed. 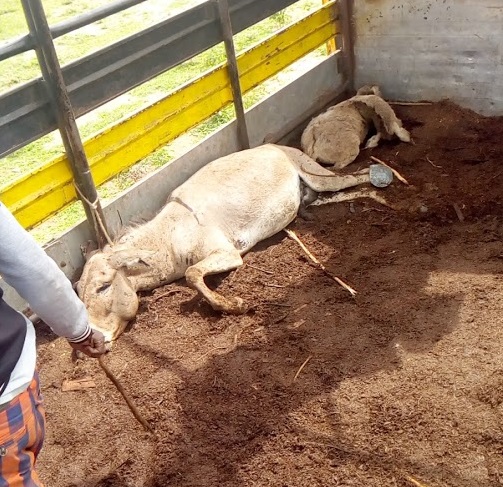 The report Under the Skin Update revealed that conditions in many donkey slaughterhouses are contrary to international welfare guidelines. Donkeys are often brutally slaughtered in front of other animals. Footage obtained by The Donkey Sanctuary from a slaughterhouse in Tanzania revealed animals being repeatedly hit with hammers in failed attempts to stun them.

A slaughterhouse in Kenya was immediately closed after witnesses recorded footage of dead and dying donkeys some with open, maggot-infested wounds. Aborted fetuses were also seen as well as skinned carcasses dumped next to live donkeys awaiting slaughter. The slaughterhouse has since reopened. 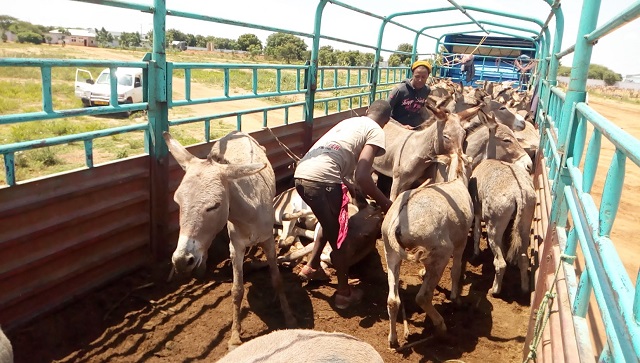 Many skin trade donkey handlers have little or no training in animal handling, often resorting to cruel and illegal methods of controlling donkeys such as kicking, dragging and the use of spiked sticks. Demand for skins is so high that even pregnant mares and young foals as well as sick and injured donkeys are indiscriminately caught and transported, contrary to international animal welfare guidelines.

In Bahia, Brazil, 800 donkeys were found starving to death in holding pens alongside hundreds of rotting carcasses which had polluted their only water source. 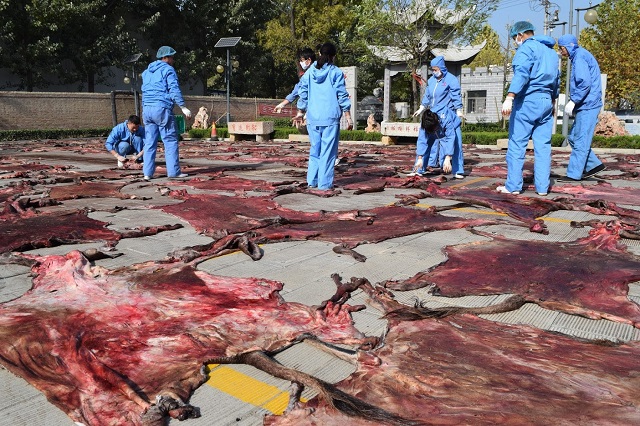 The report has found that local donkey populations have already crashed in a number of countries as increasing demand for ejiao has led to an unsustainable number of donkeys being slaughtered. The supply of donkey skins cannot meet demand in China, which needs around 4.8 million hides per year for ejiao production, so traders, mainly in Africa, Asia and South America, are exporting additional skins to China. To supply around 4.8 million hides every year, the industry would need more than half the world’s donkeys over the next five years. 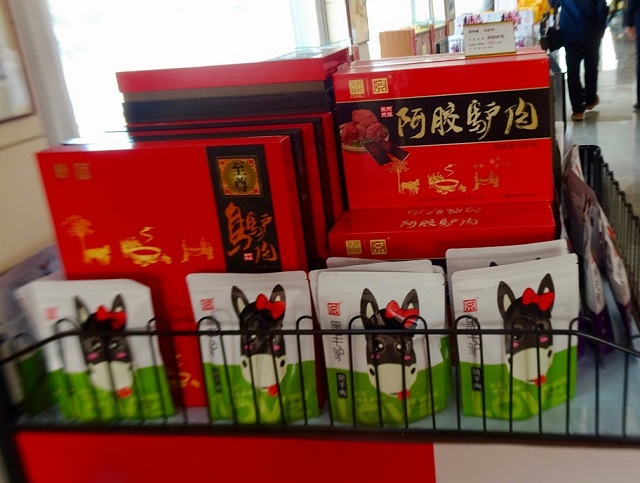 Donkey populations in China have collapsed by 76 percent since 1992. Since 2007, donkey populations have declined by 28 percent in Brazil, by 37 percent in Botswana and by 53 percent in Kyrgyzstan. In Kenya and Ghana, both countries where the skin trade operates, donkeys are also being exploited by traders with fears that their numbers could be devastated in the near future.

The collapse of the donkey population will have a hugely damaging impact on the livelihoods of an estimated 500 million people in some of the world’s poorest communities that the animals support. Donkeys transport goods to market, carry water and wood, provide access to education and are a vital source of income for vulnerable communities, particularly women.

The Donkey Sanctuary has also discovered links between the skin trade and wildlife crime, with some traders offering donkey skins for sale on online platforms that are also selling illegal wildlife products including ivory, pangolin scales and rhinoceros horn. In one instance, tiger skins were found hidden underneath donkey skins.

Unhygienic practices during transport, in slaughterhouses and when the hides are processed onwards have resulted in an increased risk of the spread of dangerous diseases such as anthrax and equine diseases, equine flu and strangles.

More than 60,000 donkeys died in West Africa this year along live skin trade routes, which the World Organisation for Animal Health have said are almost certainly linked to the trade. These deaths demonstrate the potentially high risk of contagious diseases being spread as a result of the skin trade. Donkey skins from this area are being exported untreated direct to China.

Some countries are taking action. In Colombia, the Government stopped the export of donkey skins following reports of donkeys being skinned alive, transported without a license, health risks and stolen donkeys.

In July 2017, the Chad police uncovered a donkey trafficking network after two shipping containers filled with almost 300 donkeys, many dead or dying from asphyxia, were recovered in Etena. The Director of Veterinary Services confirmed that the government attaches great importance to eradicating the trade and set up a committee to tackle the rise in incidents.

A Call for China to Act

The Donkey Sanctuary is calling for the ejiao industry to cut links with the global skin trade and move towards more sustainable sources of raw materials provided by cellular agriculture such as the use of artificially grown donkey-derived collagen.

The charity is also recommending that the Chinese Government suspends the import of donkeys and their products until both can be proven to be disease free, humane, sustainable and safe and for national governments to take immediate steps to stop the trade.

The report notes that donkeys are sentient and intelligent animals. They are aware of their feelings and emotions and can experience pleasure and joy as well as pain and suffering. 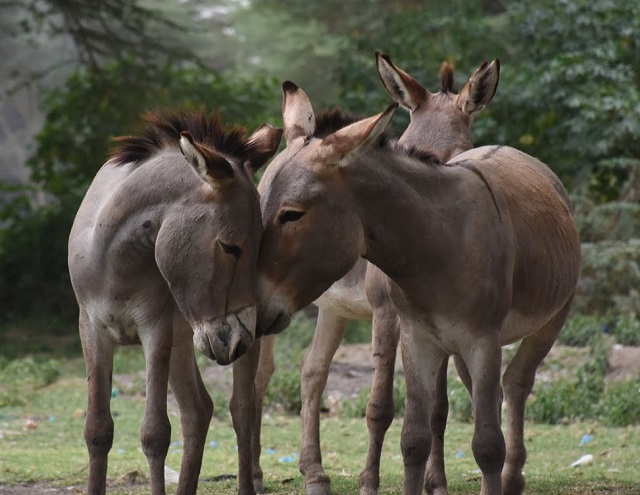 According to a new report by researchers at Cardiff University, the old issue of developing-world seaport corruption has new twist. Now that most vessel operators are prohibiting bribery using ships' funds, seafarers often have to foot the bill for payoffs in certain notorious seaports themselves. "Most major companies aren't allowing us to give any facilitation gifts [bribes]," said a third officer interviewed for the study. "Now we don't know where to account these things, and the demands can be really huge ....

The U.S. Navy is adapting an acoustic sensor system in order to monitor marine mammals in the Nanoose Bay test range in the Strait of Georgia. The acoustic sensors will help in planning and conducting joint U.S.-Canadian naval testing activity to minimize impact on marine mammals, like the endangered southern resident killer whale. High-intensity underwater noise from military testing can harm marine mammals if they are too close. The system - Marine Mammal Monitoring (M3R) - uses hydrophones and computer...

In an earnings report released Tuesday, Royal Caribbean warned that it is "unable to predict the full financial impact" of the coronavirus epidemic on its earnings for 2020, given the ongoing uncertainty surrounding the disease and the public health measures to contain it.  At the beginning of the year, business in Asia looked good. "Prior to the outbreak, our sailings in China were trending particularly well both in terms of rate and volume," Royal Caribbean reported. "Our itineraries in China...

Ocean Gyres Moving Towards the Poles

Over the past 40 years, the world's eight major ocean gyres (wind-driven current systems) have steadily shifted toward the poles, according to new research published in an American Geophysical Union (AGU) journal. There are three gyres in the Atlantic Ocean, three in the Pacific Ocean and one each in the Indian and Antarctic oceans. These rotating current systems largely determine the weather and marine productivity in coastal regions. In the new study, experts at the Alfred Wegener Institute, Helmholtz Centre...