A young couple in McIvers, Newfoundland, recently found a unique way to beat the soaring cost of building materials in an overheated housing market. They bought a vacant WWII-era house on the waterfront, strapped a trailer and a few dozen empty barrels on the bottom, and floated it half a mile across the water to their own property. Thanks to this time-tested Newfoundland method, along with a high tolerance for risk and a lot of help from their boat-owning neighbors, they secured an all-in shipping rate of just $4,000 (not counting the price of the structure).

Homeowner Daniele Penney had coveted the square, two-story house on the point ever since she was young. When she heard that new owners were planning to tear it down and build a new house, she and her boyfriend resolved to buy it and relocate it to their own land. The only catch: due to topography and powerlines, it would not be possible to move the house by land. It would have to travel about half a mile across Newfoundland's Bay of Islands.

The preparations were straightforward: jack up the house, strap barrels to the bottom and insert a steel-framed trailer underneath for the shoreside portions of the journey. All went smoothly at first, but the arrangement began to lose buoyancy towards the stern. The aft-most portion of the house took on water up to the bottom of the second story, and Penney was briefly concerned that it might founder. However, half a dozen small boats rushed over to help push, and they managed to stabilize the house and move it to shore.

"All of a sudden, there was dories coming from everywhere. The community definitely stepped up to help us get this house over," she told CBC.

House moves by float were common in the mid-1960s in Newfoundland, when a government resettlement program encouraged thousands of families in outlying fishing villages to relocate to larger population centers. About 3,200 households moved using Canadian federal grant funds between 1965 and 1970, and many of them brought their house with them - some shipping out in precisely the same trimmed-by-the-stern manner. 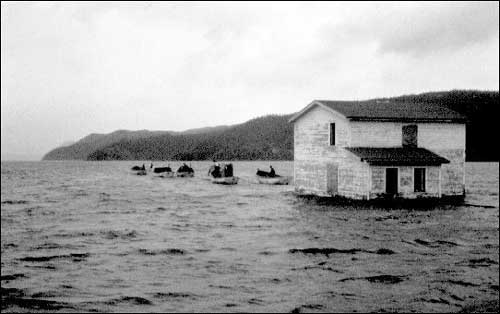