As part of an international naval exercise known as RIMPAC, Rim of the Pacific, the participating navies conduct a series of training drills that concludes with SINKEX, the sinking exercise, where ships and aircrafts conduct a live fire attack on a ship. According to the Navy, SINKEX provides participating units the opportunity to gain proficiency and confidence in their weapons and systems through realistic training that could not be duplicated in simulators.

The U.S. Navy released video and pictures of this year’s exercise conducted yesterday, August 30, in the water off Hawaii. You can see anti-ship missiles hitting the ship just above the waterline mid-ship and the resulting explosions.

Ten nations, 22 surface ships, one submarine, and approximately 5,300 personnel participated from August 17 to 31 in RIMPAC 2020, which was the 27 exercise in the series that began in 1971. This year due to the pandemic the exercise was limited to at-sea exercises in the waters surrounding the Hawaiian Islands to ensure the safety of all military forces and Hawaii’s population by minimizing shore-based contingents and potential contact.

“Simulation is a critical part of our training but there is nothing better than to conduct live fire training,” said Royal Australian Navy Capt. Phillipa Hay, commander, RIMPAC 2020 Task Force One. “Sinking exercises are an important way to test our weapons and weapons systems in the most realistic way possible. It demonstrates as a joint force we are capable of high-end warfare.” 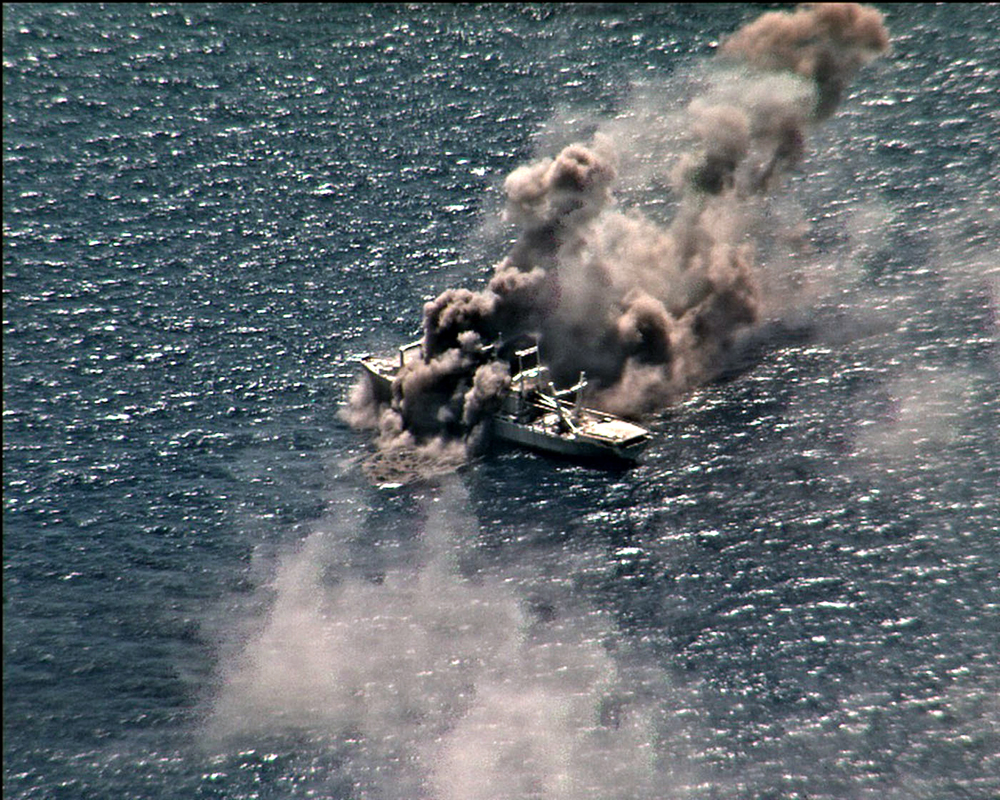 This year’s target was the decommissioned amphibious cargo ship the ex-USS Durham (LKA 114). Built at the Newport News Shipbuilding and Dry Dock Company, the 557-foot vessel was commissioned in 1969. She served during the Vietnam and Gulf wars and participated in the evacuation of Saigon. She was decommissioned on February 25, 1994.

Before the exercise, the ships are prepared in strict compliance with Environmental Protection Agency (EPA) regulations and under a general permit the Navy holds according to the Marine Protection, Research, and Sanctuaries Act. Ships are sunk in at least 1,000 fathoms (6,000 feet) of water and at least 50 nautical miles from land. Surveys are conducted to ensure people and marine mammals are not in an area where they could be harmed during the event.

Each vessel is also put through a rigorous cleaning process, including the removal of all liquid polychlorinated biphenyls (PCBs) from transformers and large capacitors, small capacitors to the greatest extent practical, and all trash, floatable materials, mercury or fluorocarbon-containing materials, and readily detachable solid PCB items. Petroleum is also cleaned from tanks, piping, and reservoirs.