Meyer Werft completed the transfer of its 115th cruise ship from the building facility in Papenburg, Germany to Eemshaven in the Netherlands on Saturday, October 23. The challenging 25-mile journey, known as the conveyance, lasts approximately 18 hours requiring the massive cruise ship to fit through several narrow passages and a lock as it travels along the Ems river.

The AIDAcosma is the ninth cruise ship Meyer has built for AIDA, the Carnival Corporation brand marketed primarily to the German-speaking market. It is also the second LNG-fueled cruise ship built by Meyer Group for AIDA and the third LNG cruise ship from the shipyard in Papenburg. These ships, along with two additional ones ordered at Papenburg and others being built at Meyer Turku are built on a standard platform developed by Carnival Corporation.

The 185,200 gross ton AIDAcosma departed Papenburg around 1:00 a.m. local time on Saturday morning assisted by two tugboats. As with Meyer’s other large cruise ship conveyances, the ship travels backward down the river as it provides better maneuverability. The journey includes passage through the lock at Papenburg, two bridges that are opened for the large cruise ship, and a unique portion of the river where the cars travel below the cruise ship.

The most difficult portion of the conveyance was completed by the afternoon and the 1,105-foot ship, with a beam of 138 feet, was brought alongside the pier in the Netherlands by about 6:00 p.m. The Aidacosma has 20 decks and will accommodate 5,228 passengers and 1,551 crew.

Construction on the cruise ship began with the symbolic steel cutting ceremony in August 2019 and two months later assembly began of the first of 90 blocks that make up the ship. The first phase of the construction is carried out in eastern Germany at the Meyer Neptune yard in Warnemunde, where the engine room blocks are assembled and then transferred to the building hall in Papenburg. The Aidacosma was floated out of the building hall at the beginning of July 2021.

The cruise ship will complete its fitting out and first bunkering while in Eemshaven. It will then sail to Bremerhaven in November and undertake sea trials before delivery.

The AIDAcosma’s features for its passengers include a rock wall, waterslide, and pool area as well as an infinity pool. There are 17 restaurants and 23 bars. It is also one of the most energy-efficient cruise ships. In addition to the LNG main engine and tanks built by Caterpillar, the ship is equipped with a heat recovery plant, electric motors, LED lighting, automation, and special glazing and paint to reduce energy consumption. 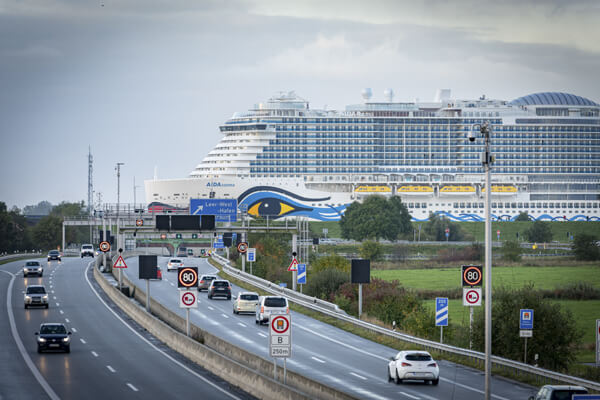 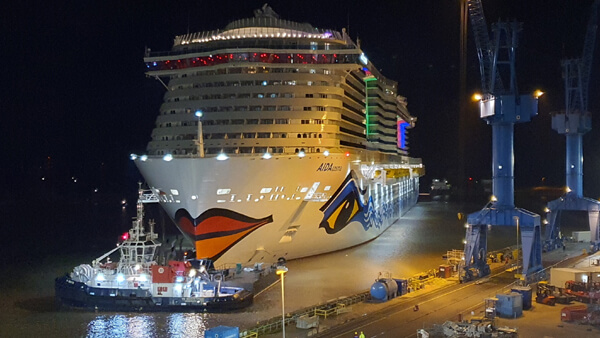 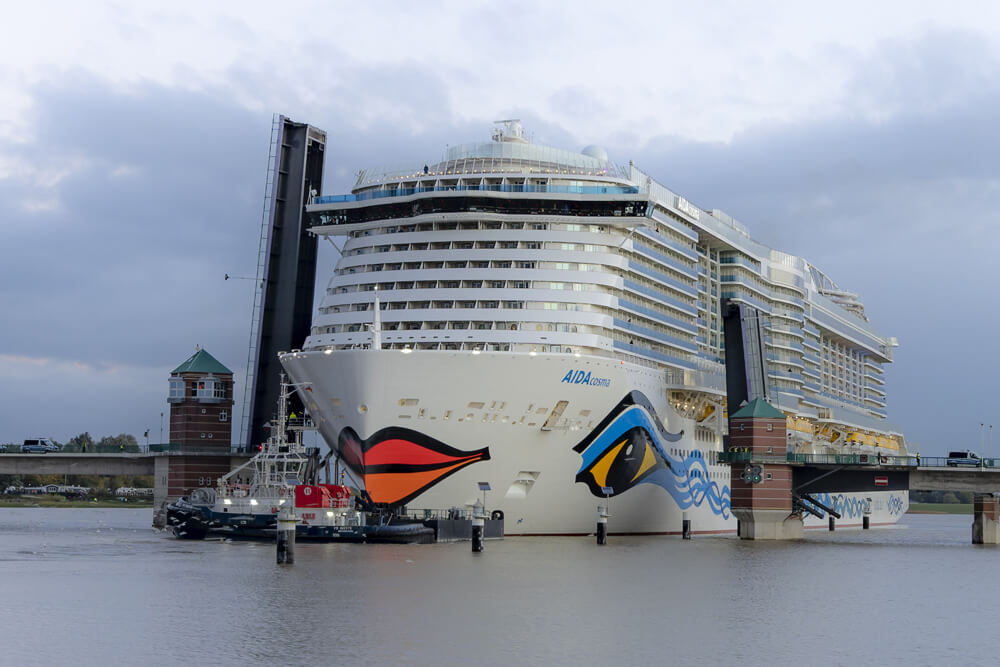