Disney Cruise Line’s new cruise ship, the approximately 144,000 gross ton Disney Wish, completed a key step in its construction on March 31 traveling from the Meyer shipyard in Papenburg, Germany to Eemshaven in the Netherlands, where it will complete its final outfitting and sea trials. Known as the Ems Conveyance, the 20-mile journey lasts about 10 hours and is a complex maneuver to move the 1,119-foot cruise ship down the river and to the ocean for the first time.

The journey began on March 30 at the Meyer shipyard with passage through the Papenburg dock lock. The passage through the lock and several bridges along the river are a tight fit for the vessel which has a 128-foot beam. The shipbuilder determined years ago that navigating vessels stern first down the river provides the best maneuverability, but makes for an unusual sight for the spectators that line parts of the river. The cruise ship is accompanied by tugs fore and aft and at one point in the journey passes over the highway which goes under the river in a tunnel.

When it enters service this summer, the newest Disney Cruise Line ship will be feature innovative new experiences steeped in Disney storytelling, including the first-ever Disney attraction at sea, immersive dining experiences themed to "Frozen" and Marvel comics, and a lounge set in the Star Wars galaxy. The company, which draws on its designers that also develop attractions for the theme parks, is also introducing a passenger suite located in the forward funnel. 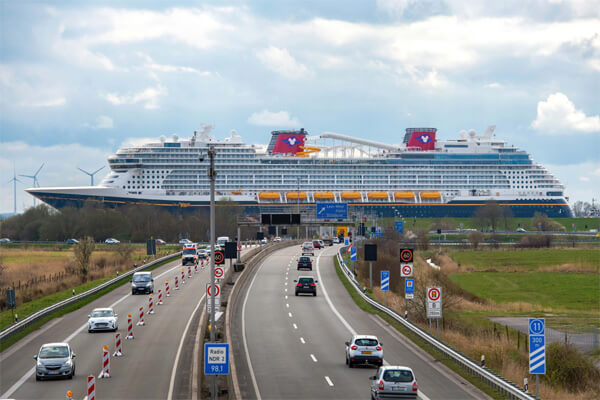 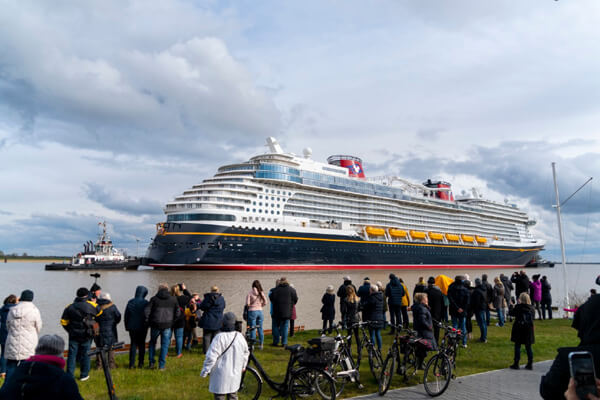