Moving at under four knots and escorted by a fleet of Coast Guard vessels and tugboats, the Liberian-flagged bulker Almirante Storni arrived at a berth in Gothenburg, Sweden. The Coast Guard completed its operation handing responsibility to the local rescue service that will oversee the efforts to extinguish the fire.

“Everything has gone according to plan so far,” reported Mattias Heneborn, rescue leader at the Swedish Coast Guard. “But the pictures we got from the police helicopter show that it is still burning in the cargo. Now it's time to put out the fire.”

Overnight the Coast Guard vessels had continued to water the cargo to maintain the dampening of the timber cargo which has now been burning for a week. Early Saturday morning, the crews confirmed that the conditions remained stable and that the fire had not spread providing the final confirmation that work could proceed to move the 31,796 dwt bulker from the anchorage outside Vinga to the Scandiahammen area in the Gothenburg port.

Complicating the effort to reposition the bulker the ship was anchored but the systems for handling the anchor were not working. Just after 6:00 a.m. preparations began for the move, including an effort to cut the anchor chain to free the ship. By around 8:00 a.m. the salvage team and Coast Guard determined that the vessel was ready to begin sailing to the port.

During the trip that lasted about two hours and forty minutes, the tugboats remained alongside periodically applying water to the fire. Another had a stern line attached in case of any complications during the maneuvering of the vessel. In addition, the Swedish authorities ordered the fairway, airways over the port, and some anchorages closed to prevent any interference with the effort to get the bulker to her berth.

Heneborn said that Coast Guard would remain on “high alert” standing by escorting the bulker during the maneuvering. “Our main mission is to prevent oil from entering the water and harming the environment.”

The rescue service had several cranes standing by at the port and before the end of the day, the work began to start offloading the timber cargo. They are working to reach the burning embers. The authorities, however, said the work would be progressing cautiously. They projected it could take anything from days up to weeks to be sure the fire was entirely extinguished.

The Amirante Storni will remain in the port until the Swedish Transportation Agency approves its departure. Local prosecutors will also continue their investigation into the origins of the fire while the Swedish Coast Guard announced it will seek compensation for its efforts from the vessel’s German owners. 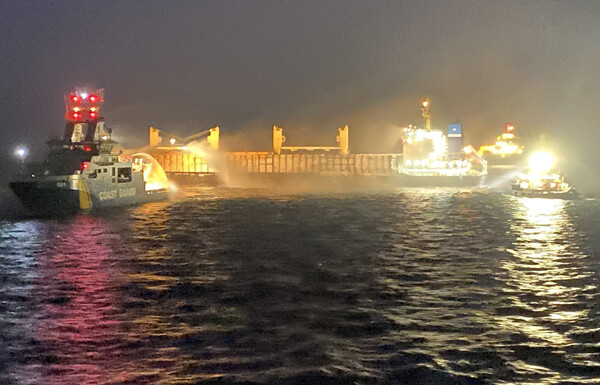 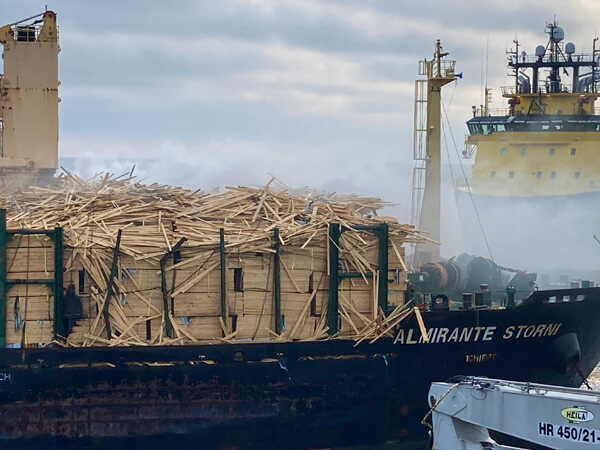 Timber cargo on the bulker 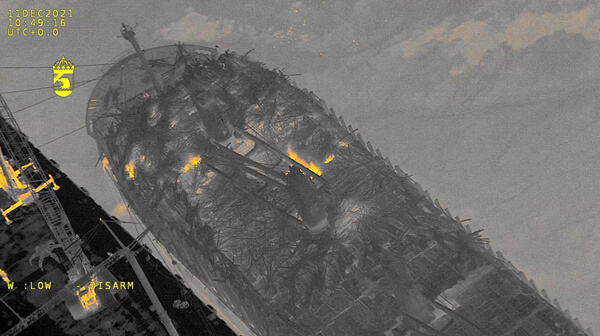 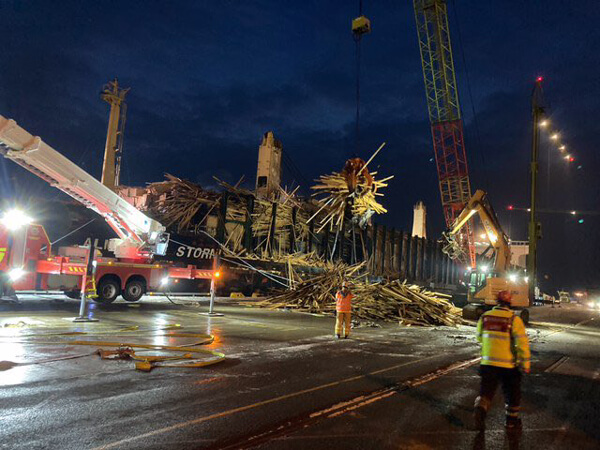