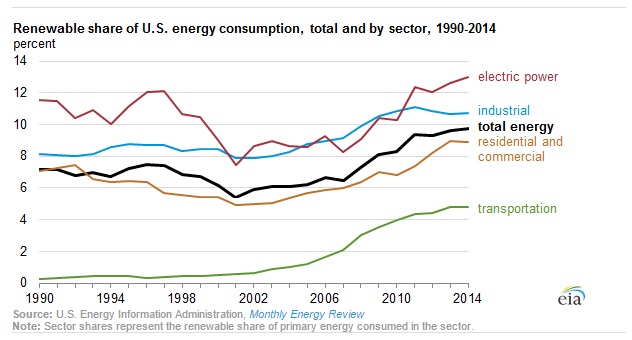 In 2014, slightly more than half of all renewable energy was used to generate electricity. Within the electric power sector, renewable energy accounted for 13% of energy consumed, higher than its consumption share in any other sector.

About 13% of the renewable energy used in the United States is now consumed in the transportation sector, which experienced the largest percentage growth in renewable consumption from 2001 to 2014. The growing demand for liquid biofuels, including both ethanol and biodiesel, pushed renewables to nearly 5% of the sector's energy consumption in 2014.

A greater use of wood for home heating and steadily growing installation of solar systems are the main contributors to increasing renewable energy consumption in residential buildings and, to a lesser extent, in commercial buildings.