Import volumes at major container ports in the U.S. are projected to rise 4.7 percent in the first half of 2017 compared with the same period a year ago, and many ports are reporting growth.

Import volumes at major container ports are expected to continue their recent growth throughout the second quarter of 2017 thanks to an improving national economy, according to the latest monthly Global Port Tracker report by the National Retail Federation (NRF) and Hackett Associates. Major container ports handled 18.8 million TEUs for the full year in 2016, up 3.2 percent from 2015.

A snapshot of some of the key ports in the nation demonstrates the increasing volumes of containers handled:

The Asian container trade is the fastest growing segment of Jaxport’s container cargo business, accounting for 36 percent of the business in the first six months of FY2017, up from 33 percent the same period in FY2016 and just seven percent in FY2014. The port has recorded an average of 21 percent annual growth in Asian container volumes during the past five years.

Jaxport continues to invest in infrastructure upgrades including a new on-dock rail facility, new 100-gauge container cranes and ongoing enhancements to terminal berths, docks and rail. A federal project to deepen the Jacksonville shipping channel to 47 feet will offer the largest container ships calling on the U.S. East Coast unobstructed access to the port’s terminals. 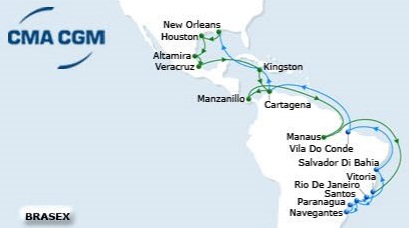 CMA CGM has initiated a new weekly direct container service to South America from the Port of New Orleans since April 21. CMA CGM’s Brazil Express operates from the Port’s Napoleon Avenue Container Terminal, enhancing the Port’s direct access to ports of call between Mexico and Brazil.

March cargo volumes jumped 29 percent at the Port of Los Angeles compared to the previous year. The robust numbers came through a combination of strong export volumes (up 20 percent), a post Lunar New Year surge of cargo from Asia and U.S. retailers shipping merchandise ahead of the new vessel alliance deployments that began this month. For the first quarter of 2017, cargo has increased 10 percent compared to 2016.

The Port of Los Angeles and U.S. Army Corps of Engineers have prepared a Draft Environmental Impact Statement for the container terminal located at Berths 226-236 on Terminal Island operated by Everport Terminal Services.

Everport, affiliated with Taiwan-based Evergreen Line, has a long-term lease with the Port for operation of the terminal through 2028, which would be extended 10 years. The proposed project would improve the container-handling efficiency and capacity of the existing terminal to accommodate the projected fleet mix of larger container vessels that are anticipated to call at the Everport Container Terminal through 2038.

Port Newark Container Terminal (PNCT) successfully handled a record number of container volumes without disruption to its customers following its January 2017 upgrade to Navis’ N4 terminal system. The move to N4 is part of the port’s $500 million infrastructure modernization project that is expected to nearly double the terminal’s capacity by 2019.

Located within the Port of New York and New Jersey—the largest port on the East Coast and third largest in the U.S.,PNCT is among the most important terminals responsible for moving cargo throughout the nation and abroad, handling 1.3 million TEUs annually. With the region’s massive project to raise the Bayonne Bridge near completion, larger vessels will be able to call at PNCT for the first time. As a result, PNCT has undergone a $500 million terminal redevelopment project. 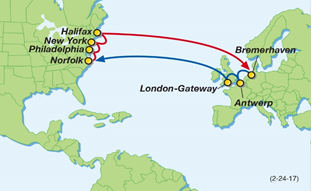 THE Alliance made its first call to the Port of Philadelphia’s Packer Avenue Marine Terminal (PAMT) this morning as part of its Northern European, AL1 (Atlantic Loop) service this month.

In November 2016, Pennsylvania Governor Tom Wolf announced a $300 million Port Development Plan which will more than double the container volumes moving through Philadelphia.

Ports of call for the AL1 will be:  Philadelphia, New York, Halifax, Bremerhaven, Antwerp, London Gateway and Norfolk.