The first commercial U.S. offshore wind farm, Block Island, is scheduled to come online in late 2016, and, coinciding with this, on December 15, the Bureau of Ocean Energy Management (BOEM) will hold a lease sale for more projects.

14 companies have qualified to participate in the New York lease sale. Since the first lease sale in 2013, the number of companies qualifying to participate has steadily increased, from eight in 2013 to 14 in the latest offering. 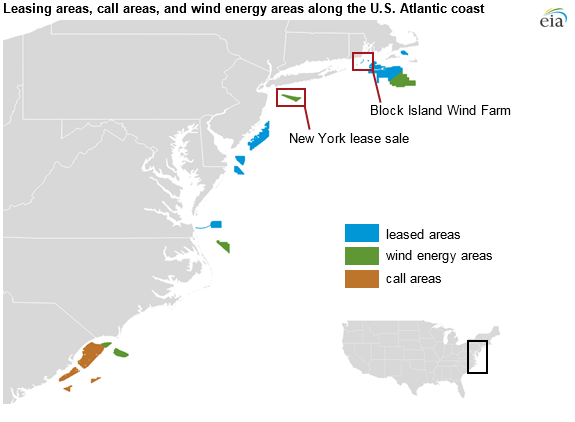 Located three miles off the southeastern coast of Rhode Island, Block Island consists of five wind turbines that will produce 30 megawatts (MW) of electricity. The developer, Deepwater Wind, began construction on the project in July 2015.

The company is also in the early stages of development of its South Fork Wind Farm, a 90 MW offshore wind farm located in federal waters 30 miles east of Montauk, New York that is scheduled to become operational in 2022.

BOEM held the first competitive federal offshore commercial wind lease sale in 2013 and auctioned off nearly 165,000 acres for wind energy development off the coasts of Massachusetts and Rhode Island. Since then, BOEM has held four additional auctions for wind development in the Atlantic region. To date, it has issued 11 commercial leases in federal waters. Cumulatively, since 2013, more than one million acres of land in federal waters have been leased for wind development and have generated more than $16 million in revenue from the lease sales for the federal government.

During the same period, the federal government collected more than $24 billion in revenue from offshore energy extraction activities, predominantly from oil and natural gas. This revenue includes rent, royalties per energy unit, and other fees.

Because offshore wind is still in the development phase, companies are not currently paying royalties on production or other fees, but BOEM will collect future revenue from operating fees and additional lease sales. Production fees will be based on the capacity of the wind farm, its capacity factor, the average wholesale electric power price and an operating fee rate that BOEM determines.

Wind speeds offshore tend to be higher and less variable compared to onshore. Additionally, offshore wind has the potential to provide power in coastal areas where demand is high and land-based renewable energy resources are limited. However, offshore wind currently has much higher costs than onshore wind, solar or nonrenewable electricity generation options to serve loads on the U.S. mainland.