While flying off the coast of Maryland and Virginia, the X-47B connected to an Omega K-707 tanker aircraft and received over 4,000 pounds of fuel using the Navy's probe-and-drogue method.

During the test, the X-47B exchanged refueling messages with a government-designed refueling interface system on board the tanker. The aircraft autonomously maneuvered its fixed refueling probe into the tanker's drogue, also known as the basket, the same way a Navy pilot would refuel a manned aircraft.

"In manned platforms, aerial refueling is a challenging maneuver because of the precision required by the pilot to engage the basket," Duarte said. "Adding an autonomous functionality creates another layer of complexity."

This testing helps solidify the concept that future unmanned aircraft can perform standard missions like aerial refueling and operate seamlessly with manned aircraft as part of the Carrier Air Wing, he said.

Over the last few years, the Navy accomplished several significant firsts with the X-47B that showcased the Navy's commitment to unmanned carrier aviation. With the completion of this program, the service continues to develop its future unmanned carrier-based platform, known as UCLASS.

The X-47B completed its first carrier-based arrested landing on board USS George H.W. Bush (CVN 77) in July 2013. In August 2014, it flew in the carrier pattern with manned aircraft for the first time and conducted a total of five catapult launches, four arrestments and nine touch-and-go landings, including a night time shipboard flight deck handling evaluation. 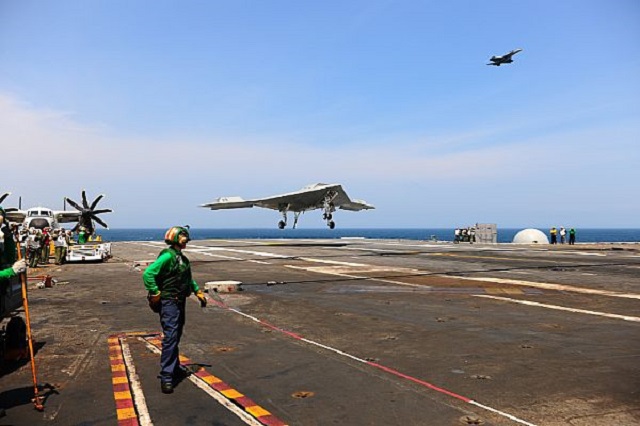