US Identifies 1.7M Acres of Wind Energy Areas in the Central Atlantic

As the next step in the development of the U.S.’s offshore wind energy sector, the Bureau of Ocean Energy Management (BOEM) announced eight draft Wind Energy Areas (WEAs) offshore the U.S. central Atlantic coast. The bureau is seeking public comment on the proposed lease areas as well as continuing additional consultations with a broad range of users and government agencies as it works to finalize the definitions in a multi-step process before lease auctions would be conducted.

The draft WEAs cover approximately 1.7 million acres offshore North Carolina, Virginia, Maryland, and Delaware, with their closest points ranging from approximately 19 to 77 nautical miles off the U.S. central Atlantic coast. The eight draft WEAs represent a subset of the original 3.9 million acres of the Call Area that the Department of the Interior announced for public comment in April 2022.

“As BOEM moves forward to identify wind energy areas in the central Atlantic, we continue to prioritize a robust and transparent process, including early engagement with Tribal governments, state and federal agencies, and ocean users,” said BOEM Director Amanda Lefton. “We want to gather as much information and traditional knowledge as possible to help us identify Wind Energy Areas -- the offshore areas that are most suitable for commercial wind energy activities while having the fewest apparent environmental and user conflicts.” 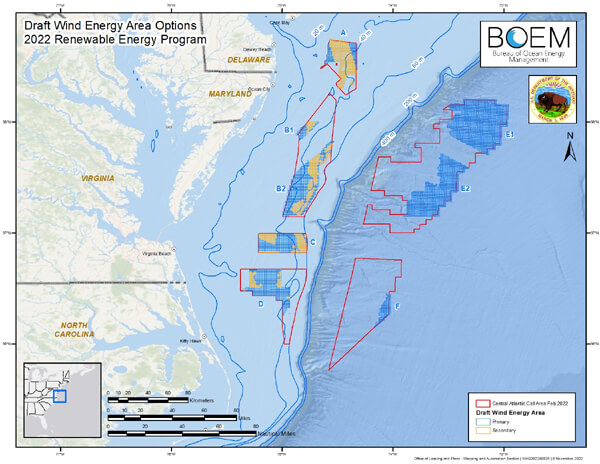 As part of its process, BOEM collaborated with the National Oceanic and Atmospheric Administration’s National Centers for Coastal Ocean Science to use an ocean planning model that seeks to minimize conflicts. BOEM also intends to further explore these areas with the Department of Defense, U.S. Coast Guard, NASA, and other ocean users, such as the fishing industry, to collect additional information that should be considered before finalizing the WEAs. The final WEAs may be further modified after incorporating feedback on potential conflicts such as U.S. Coast Guard’s fairways for transiting vessels, commercial fishing, a NASA danger zone, and marine habitat areas.

The wind industry trade group the American Clean Power Association (ACPA) issued the statement applauding the release of the proposed areas noting it has the potential to generate approximately 20.6 gigawatts, which is enough to power 7.2 million homes.

“It is especially significant that five of the eight draft WEAs identified are in shallow waters that allow for the use of offshore wind turbines with fixed bottom foundations,” said Josh Kaplowitz, Vice President for Offshore Wind at the ACPA. “These areas represent our best chance to extend the fixed bottom project pipeline on the East Coast that will spark further supply chain investments in the mid-Atlantic and help meet current and anticipated state and federal offshore wind and greenhouse gas reduction goals.”

The Interior Department highlights the progress in offshore wind development noting that the Biden administration has approved the nation’s first two commercial-scale, offshore wind projects, initiated environmental reviews for 10 additional projects, held record-breaking lease sales, and ushered in billions of dollars in private investment. Construction has begun on the first East Coast offshore wind farms while BOEM moves forward expanding the industry to both the Pacific Coast and recently announcing the first sites in the Gulf of Mexico.