In a rare instance, the U.S. Air Force’s northern most base, coordinated an international rescue and provided assistance for a commercial vessel in distress. Contractors stationed at Thule Air Base, Greenland, 750 miles north of the Arctic Circle, responded to the distress call using the Air Force's only tugboat to save six crew members and tow the ship to port for repairs.

At about noon local time on August 3, a Royal Danish Air Force plane that had taken off from Thule picked up the distress call approximately 50 kilometers south and relayed it back to base. The ship’s crew reported the vessel had a leak and was taking on water faster than the onboard pumps could remove it.

Col. David Hanson, Thule AB installation commander, approved the contractors from Vectrus Services to take Thule’s tugboat, the Rising Star, to provide support for the ship and its crew.

“The rapid efforts and teamwork of the 821st Air Base Group, Vectrus Services, the Royal Danish Air Force, Joint Arctic Command and the Joint Rescue Coordination Center were instrumental in saving lives today,” Hanson said. “This was an absolute international team effort.” 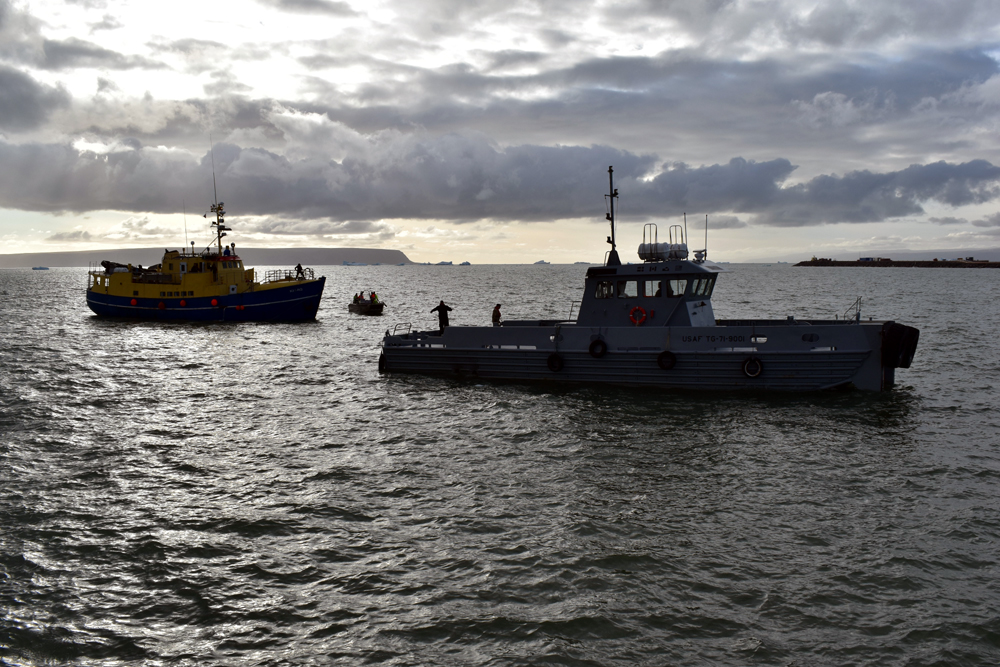 The ship, a 75-foot commercial tour boat was carrying Greenland nationals who were offering carpentry services to remote villages along Greenland’s coast. The night prior, the crew noticed a leak in the engine room, said Casper Jensen, Vectrus Services’ civilian operations manager at Thule. Onboard pumps were unable to remove water faster than it was coming in, so the crew sent out a distress signal, not knowing if anyone would be able to respond.

“Greenland is a big area, and the waters around Greenland are even bigger,” Hanson said. “If that aircraft wouldn't have been flying overhead, who knows who would have received that distress call?”

Through that RDAF aircraft, the crew of the Rising Star, the Air Force’s only tugboat, were in touch with the in-distress crew until they arrived at about 2 p.m. The weather was rough, with Jensen reporting two-meter waves as the tugboat crew positioned themselves alongside the ship. “[It was] like a washing machine,” Jensen said.

At first, the Rising Star provided pumps and generators to assist in pumping water from the ship. However, half an hour into the pumping, the commercial ship’s main engine died, leaving its crew without power or navigation capabilities. At that point, it became necessary to tow the boat back to Thule.

“[We had to sail at] slow speed for the first three hours because of the rough seas, until we got inside the bay,” Jensen said. By the time the Rising Star and the commercial ship were safely at Thule, it was 9 p.m.

Once the vessel had been brought safely into port, the contractors provided fuel and electrician support to repair the ship.