Unique Sail Cruise Ship Under Construction Gets Her Masts

While much of the cruise industry remains shut down, work is proceeding in Spain on one of the more unique cruise ships currently under construction.  Sea Cloud Cruises of Germany is building a new 453-foot long three-mast full-rigged ship that it expects to enter service by late this year.

Recently, in the lost art of building sailing ships, the 177-foot tall aft mast of the vessel, known as the mizzenmast, was raised into position.  One by one, the three masts, already equipped with shrouds and stays are now being erected on the ship. The rigging plan, which calls for a sail area of over 44,000 square feet, was developed by the offices of Polish yacht designer Zygmunt Chorén, who is one of few specialists who still master the art of windjammer construction. 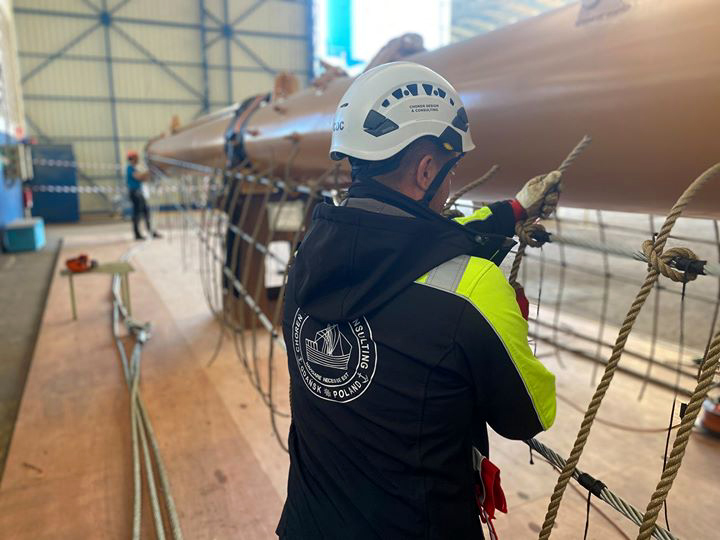 Mast being prepared for the new Sea Cloud Spirit

According to the company, raising the aft mast is an important prerequisite for the completion of the new sailing ship that will be known as the Sea Cloud Spirit. The mizzenmast not only carries the sails but also contains the exhaust system for the ship’s engine. "As soon as the shrouds and stays are attached and the mast is aligned, we can start testing the engine," explains Daniel Schafer, Managing Director of the Hamburg shipping company Sea Cloud Cruises.

Construction of the new sailing ship has been more than a 10-year perilous journey. The ship was under construction in 2008, then known as the Sea Cloud Hussar, but the shipyard went bankrupt. For nearly a decade, the hull was caught in the bankruptcy, and only in 2018 was the company able to obtain the hull and resume the project with a new shipyard and design team.  The plans call for the ship to accommodate 136 passengers with 69 cabins, including for modern cruising 25 cabins with private balconies, as well as a passenger elevator and a spa.

The tallest of the ship’s three masts will be approximately 187 feet. In addition to sail power, the ship will have two diesel-electric drives with a capacity of 1700 kW each that operate entirely on low-sulfur marine diesel fuel.

While work on the Sea Cloud Spirit was delayed due to coronavirus, the company still expects it will be completed in 2020. Founded in 1979, the company began operations with the famed original Sea Cloud, built in 1931 in Germany as the private yacht of American financier Edward F. Hutton and his wife Marjorie Merriweather Post, heiress and an American businesswoman, socialite, philanthropist, who created the General Foods company. In 2001, the company introduced its second sailing ship the Sea Cloud II. The ships cruise in the Mediterranean, Canary Islands and the Caribbean.