A Canadian ship design and research company is presenting several unusual looking new technologies for ocean-going and inland waterway vessels which they report can increase the ship’s capacity and speed while reducing construction costs. NaviForm Consulting & Research, based in Vancouver, Canada reports that it has already been granted four patents in the US, European Union, and other countries with three additional patents pending.

Two of the firm’s concepts were developed in a new ferry, the Esperanza that is sailing for Navimag Ferries in the Patagonia region of Chile. The most eye-catching element of the design is a new bow shape that NaviForm is calling the winged bow. 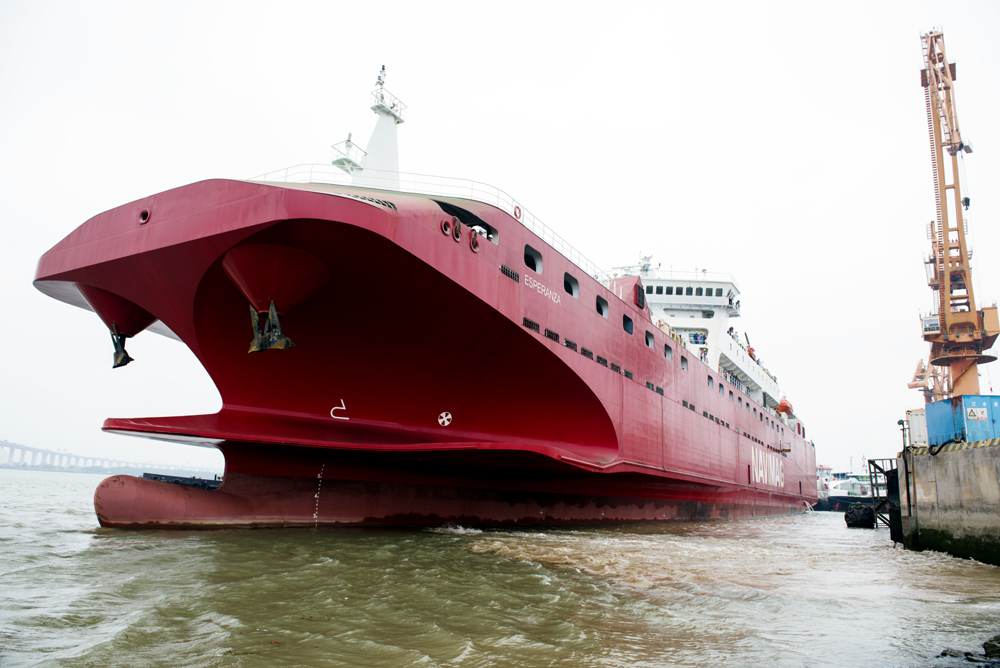 The winged bow aboard the new ferry Esperanza - courtesy of NaviForm

According to the designers, the new geometry of the bow on the ocean-going vessel reduces the resistance of the hull, resulting in either higher speed or less power, fuel consumption, and GHG emissions. It also reduces motions in waves, shown both in testing and in operation to be 50 percent lower than conventional bow fitted hulls. The design is also reported to eliminate slamming, making it possible to design a lighter structure. Finally, they say the new bow concept also increases the capacity of the hull or reduces its length and cost for a given capacity.

Similarly, they have also developed a new geometry of the stern bulbs that spins the flow of water into propellors counter to their rotation. NaviForm says that this increases efficiency.

The Esperanza design combines these technologies. The 492-foot long vessel can carry over 240 passengers and has 1800 vehicle lane meters on two decks. The 10,500 mt displacement vessel, however needs only 2500 kW into her propellors (1250 kW each) to sail at 14 knots as a result of these design technologies says NaviForm.

NaviForm also asserts that the Esperanza is so efficient that her EEDI (Energy Efficiency Design Index) not only meets present but also future IMO targets without a need to reduce speed. 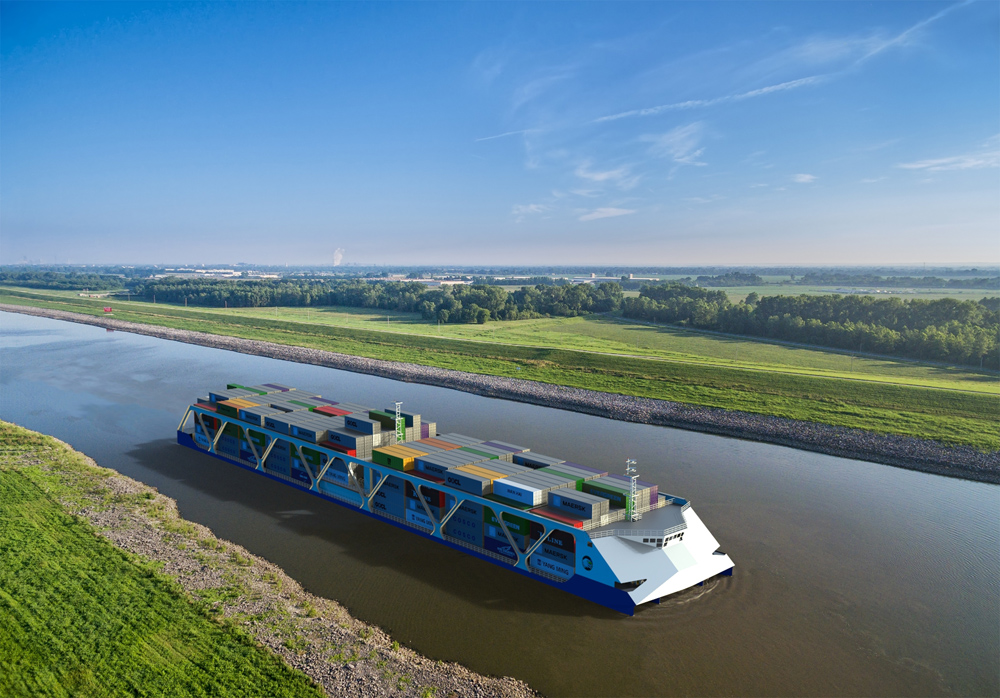 The designs also are presenting several new concepts that are being combined in the design of a large river container carrier for the service on the Mississippi River. One element is the Exoskeleton Structure, named for the fact that it is fitted outside the hull to provide the required longitudinal strength, rather than relying on the hull structure. This allows ocean-going and river hulls to be lighter and in the case of river hulls, also extremely shallow.

NaviForm also developed a zero wave bow for self-propelled river vessels or barges, which as its name suggests generates no bow wave. According to the designers, this eliminates the problem of shore erosion, which limits the speed of river or coastal vessels. Featuring two side skegs with a foil between them, it captures the flow and directs it under the hull, rather than to the sides in the form of waves which represent wasted energy and cause shore erosion

Construction of the first 594-foot hull is due to begin in the first quarter of 2021, with three sister ships to follow at six month intervals. With an 8.8-foot draught, the hull depth is only 12.8 feet and steel weight only 2300 mt. It will carry 1700 TEU at speeds up to 16 knows and it is LNG powered.